I love Vin Diesel. I love his voice, I love his face, I love the shape of his big baldy head and - to a lesser extent, admittedly - I love his films. He seems like a genuinely nice guy, so when he announced he re-mortgaged his house in order to get Riddick funded, I believed him. If any other Hollywood big shot claimed they'd put their house on the line to resurrect one of their fallen franchises it'd seem like a desperate career move, but Diesel has a Fast & Furious fallback; he didn't need Riddick to happen, he just felt the character still had life left in him. And he was right.


With David Twohy back in the director's chair and a budget approximately one third of 2004's mega-budget fartsplosion The Chronicles Of Riddick, this third movie following professional skulker Richard B. Riddick (the 'B' stands for 'Bastard') is an obvious throwback to the stripped-back, small-scale sci-fi of Pitch Black. In fact, the first 30 minutes feel like a Bear Grylls-style survival slog, with Ricky B left for a dead on a godforsaken planet by Karl Urban, who presumably shot his one-scene cameo before breakfast.

Eventually, Riddick has to reveal himself by setting off a beacon to any nearby bounty hunters ("This isn't him calling for help," says one hunter who answers the call, "It's him calling a taxi"). Two ships of assassins touch down on the unnamed planet, and it's around this point that Riddick goes AWOL while we get acquainted with the men (and woman) he'll inevitably kill (and fuck). For a while you wonder if Diesel was off shooting a Fast & Furious movie on his lunch break. 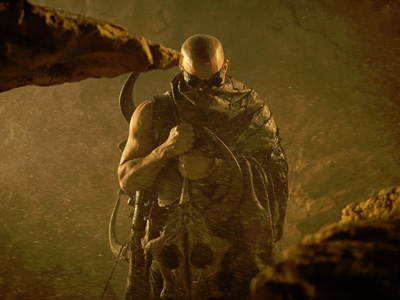 
On his own, Diesel shoulders the movie expertly, needing no more than a grumpy face or a gravelly voiceover to set the mood. And what a mood: Twohy sets the scene perfectly, with some very brown but very pretty vistas and some genuinely stomach-churning native creatures. When the bounty hunters descend, however, the deficiencies in Riddick's script become evident: they're a clichéd bunch of movie mercenaries who barely share a personality between them. At least Jordi Mollà as head honcho Santana registers, seemingly educated at the Peter Stormare School Of Sleazeballs, while Dave Bautista gets a few chuckles, which bodes well for Guardians Of The Galaxy I guess.

Joe Queenan recently posted a great article on futuristic movies using oddly archaic speech patterns; it was written about Elysium, but it applies ten-fold to Riddick. (E.g. when Katee Sackhoff's token totty says something sounds "a bit weird", which doesn't feel particularly cool or of the time). In a movie set in a distant future with extra-terrestrial life and infinite possibilities, it's incredibly jarring to hear someone refer to Riddick as a "big fuckstick", or to hear Diesel refer to an exotic-looking alien as "the guy over there with the fucked-up face".

This is an action movie first and foremost, but it's just as well actions speak louder than words, because the dialogue is woeful. "In 60 seconds, you're going to watch your head fall into a box," threatens Matt Nable's hothead, nonsensically. "I don't fuck guys, I fuck them up," growls Sackhoff. Even Riddick has his fair share of clunkers, like when he suddenly gets all rapey and makes clear his intent to go "balls deep" in his new lady-friend (then impotently qualifies it: "But only 'cos you'll ask me to"). "Riddick you louse!" you'll think, secretly thrilled at your own brilliant wordplay. 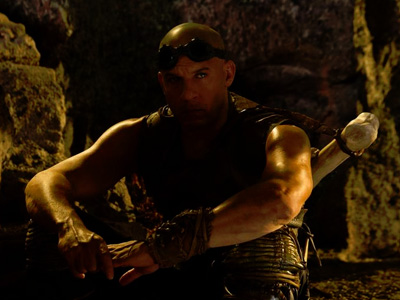 
Despite a second act lull, wherein Diesel is confined to the shadows (still not convinced the 6-foot, 225lbs actor is a world champion at hide and seek), Riddick comes alive at night when the monsters descend and the Pitch Black comparisons really hit home. As in the first act, Riddick is really put through the wringer; with the odds ever mounting against him, he feels vulnerable and even expendable at times. Like Pitch Black, Riddick is dark, not just in terms of lighting or atmospherics, but in nature. At its core this film is about one man's refusal to die horribly, and Diesel sells the high stakes in spite of his character's stone-faced demeanour.

Riddick is a movie with plenty of issues, but Vin Diesel's gigantic screen presence makes them seem relatively insignificant. If you can overlook a few sub-standard special effects (compensated by top-notch creature design) and a cast of cardboard cut-out supporting characters (forgiveable, seeing as most of them are already as good as dead), you'll get the most out of a fun little sci-fi flick with all the right intentions. Fast & Furious might pay the bills nowadays, but in making amends with Riddick, I'm ecstatic that Diesel has finally got his house in order.

More:  Riddick  Vin Diesel  David Twohy  Karl Urban  Katee Sackhoff
Follow us on Twitter @The_Shiznit for more fun features, film reviews and occasional commentary on what the best type of crisps are.
We are using Patreon to cover our hosting fees. So please consider chucking a few digital pennies our way by clicking on this link. Thanks!