Those bloody Orange adverts have a knack of putting me right off the films they promote, making me judge them months before they're released. Just read my Gulliver's Travels review for proof (although it didn't help that that actually was complete arse). I was well-prepared to dislike Rio on the basis of that God-awful phone ad. Well, don't I feel like a fool...

Rio is a beautiful, vibrant animation with some genuinely astonishing visuals. The story's the usual predictable stuff, but the city's the real star attraction - a love letter to Rio De Janeiro. We'll just awkwardly side-step past the high murder rates, gang warfare and drug problems, like the movie does. Hey, that parrot sounds just like Mark Zuckerberg! 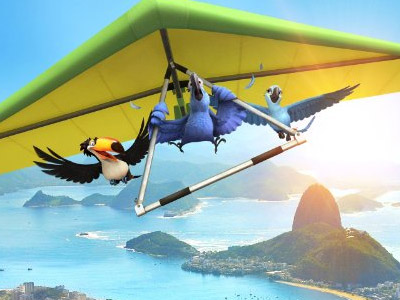 True story: for years I thought it was 'hand-gliding' Boy is my face red!


Blu (Jesse Eisenberg) is a domesticated but extremely rare Blue Spiz Macaw, believed to be the last male of his kind. Years of being spoilt rotten by his owner Linda (Leslie Mann) in snowy small town Minnesota has left him lazy, partial to the elements, fearful and unable to fly. But after feisty Jewel (Anne Hathaway), the last female Blue Macaw, is discovered in Brazil, Blu is yanked from his home comforts and taken to Rio De Janeiro to meet her. Hilarity, adventures and fish-out-of-water giggles quickly ensue.

Despite the all-too-familiar opposites attract story we've seen time and time again, Rio's charm comes from the devotion to crafting such a wonderful, vivid, three-dimensional take on the city - it really is magnificent. The hang-gliding scene in particular is a perfect excuse to showcase the animators' hard work, sweeping around Christ the Redeemer to swooping down along Copacabana Beach. Director Carlos Saldanha really knows how to sell his hometown.

But while we're seduced by the breathtaking visuals, the story sticks to a standard love/hate relationship template between Blu and Jewel. Both are voiced so perfectly by Eisenberg and Hathaway that the simple plot can be easily forgiven. It is a kids' film after all. 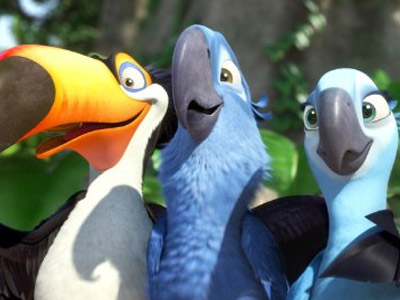 I sure am looking forward to all the inevitable 'Blu-ray' puns!


Meanwhile, it's a game of 'guess the famous voice' with the supporting cast, with all manner of vaguely recognisable exotic creatures - Tracy Morgan's slobbering bulldog lays claim to a lot of the laughs. However, Jemaine Clement stands out as the evil Nigel, a large white Cockatoo acting all Boba Fett. He even cracks out a song. A highlight for Flight Of The Conchords fans, there.

A few more gags to cater for the parents would have been welcome, but kids will utterly love it. Flying around the lush, exotic scenery to the sounds of Samba - it's simply on another level compared to the comparatively cold Ice Age movies. Now let's see what film Orange will have me awkwardly change my mind about next...

More:  Rio  Jesse Eisenberg  Anne Hathaway  Tracy Morgan  Jamie Foxx  Leslie Mann  Jemaine Clement
Follow us on Twitter @The_Shiznit for more fun features, film reviews and occasional commentary on what the best type of crisps are.
We are using Patreon to cover our hosting fees. So please consider chucking a few digital pennies our way by clicking on this link. Thanks!