Rise Of The Planet Of The Apes

Since the original Planet of the Apes was released in 1968, it has spawned four sequels, two TV series and a critically disparaged Burton remake. But that all finished 10 years ago so of course it’s time for a prequel/reboot/cash-grab. But can this new film actually offer anything new to a pretty well-exhausted canon, or is it just scraping the bottom of the barrel of monkeys?

Against all odds, and certainly against my expectations, Rise Of The Planet Of The Apes...is actually really pretty brilliant. I’m now a little ashamed to say that I was secretly hoping it would be utterly terrible – a movie of unintentional LOLs made up of stupid funky gibbons acting unfeasibly humanlike. Alas, the film treads the fine line of realism and ridicule very carefully and, despite some pretty glaring plotholes, the combination of astonishing special effects and a tension-filled story makes for a gripping and worthy rebirth for the franchise.

James Franco plays scientist Will Rodman who, while working on a cure for Alzheimer’s (fuelled by his own dad’s condition – portrayed by John Lithgow on top eccentric form), is experimenting with injecting apes with a special serum. After the failed programme is shut down though, Rodman is left with an orphaned ape who has been born with super-science in his genes. Naming him Caesar and raising him as a pet/child, it’s not long before the chimpy chappy displays extraordinary signs of intelligence. Many years later, however, and Caesar is sent to a monkey facility run by evil Brian Cox and Draco Malfoy, leading this provoked primate to incite a revolution against us bastard humans. 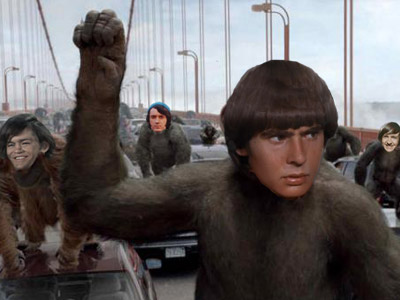 People say they monkey around.

Any film that ends in monkey mayhem is always going to have its fair share of accidental hilarity and this film can’t escape some too-absurd moments that pushes the rationality barrier a little too far. For example, while a human and an ape communicating via sign language is perfectly acceptable, showing Caesar chatting to an orang-utan in the same way and including subtitles just makes the whole scene look like a PG Tips advert. Also, FYI filmmakers, having an ape pickpocket a guard to get a penknife seems reasonable, but then trying to sell the idea that this MacGyver monkey has then tied it to a stick and used it to pick the lock on his cage is impressively dumb.

That said, the film makes up for these moments by always getting back on track to the central story at hand and, with the film clocking in at just over 100mins, there is never much time to waste in this taut monkey tale. While this accounts for two strange time jumps, which allow for Caesar to grow up over 8 years while apparently being completely inconsequential for everyone else involved, it helps to lend the film a surprising fast pace while still gradually developing friction between Caesar and his human handlers. And, in many ways, this is what makes the movie truly feel like it is part of the original films (as though the occasional homage isn’t enough). Like the first Planet Of The Apes, there are rare moments of humour and tenderness, but all the while this is a pressure cooker of misjudged actions and boiling anxiety.

It shouldn’t come as a shock that by far the film’s greatest achievement is the WETA-created special effects used to computer generate monkey models so lifelike that you could pick the fleas from their heads. In fact, with Andy Serkis’ incredible performance as Caesar, this simulated simian wrings more emotion from his scenes than any of the easily replaceable real-life actors – and this includes, in particular, James Franco who, as the ape’s paternal figure, only ever seems to be clinically fascinated with his creation rather than display any real familial affection. 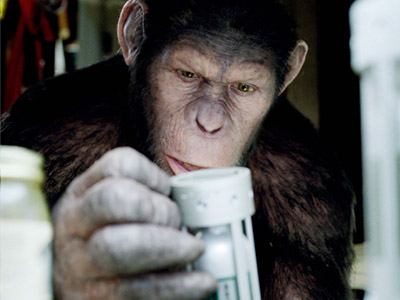 Side effects include MASSIVE HANDS.

By the time we reach the riotous third act, with an ape army facing off against police across the Golden Gate Bridge, you get the sensation that this is a very real and menacing threat to humankind. Nagging doubts about how the number of monkeys seems to have quadrupled without explanation, and whether or not all they’re going to do is fling dung at the authorities, dissipate as Caesar leads a strategic charge on their human oppressors. And it makes for some heart-stopping sequences as we, the audience, are placed right in the middle of the stampede.

It’s a film destined to be picked apart post-viewing – why does Will consider his serum a failure after his Dad’s condition worsens again, despite the fact that he has still effectively found a cure for Alzheimer’s that lasts for five years? Why, when rushing through a second version of the serum, do the scientists test it on the ugliest, most hideously scarred ape in the facility, who is sure to turn villainous at some point? Why does Will have the world’s unluckiest neighbour, forced to put up with acts of dementia, raging chimps and a deadly virus?

It doesn’t really matter, of course – there’s more than enough ‘wow’ in this film to help gloss over these typical sci-fi grumbles to make it become the most surprising hit of the summer. And, with a possible sequel set-up and a subtle continuation of important events during the end credits, it shouldn’t be too long before a sequel is announced. Return Of The Rise Of The Planet Of The Apes, anyone?

More:  Rise Of The Planet Of The Apes  James Franco  Planet Of The Apes
Follow us on Twitter @The_Shiznit for more fun features, film reviews and occasional commentary on what the best type of crisps are.
We are using Patreon to cover our hosting fees. So please consider chucking a few digital pennies our way by clicking on this link. Thanks!