So it was back in December when I saw Jake Schreier's slightly futuristic indie debut. (*glances at calendar*) And, as I write this, it's now March. That's some work-rate, huh.


It's cool though. My scribbled notes, which at one point featured the line "not enough robot fighting", came to around 950 words when written up, and I've watched the trailer and read the synopsis at least twice since December. Seriously, guys, I got this. Right then, something about a classy robot...

Set in the 'near future', Frank Langella plays the imaginatively-named Frank, an elderly semi-retired cat burglar living a simple life. He has occasional video chats with his globe-trotting, good Samaritan daughter (Liv Tyler) and regularly visits the library to check out the librarian (Susan Sarandon) and get all nostalgic about classic books.

Worried about his father's deteriorating mental state, his fed-up son (James Marsden) buys him a polite helper robot, aptly named Robot. But being a stubborn, change-fearing old man, Frank is far from impressed. Predictably though, we soon discover Frank hasn't lost all his marbles just yet and has a change of heart when realising Robot could prove to be the perfect partner in crime. 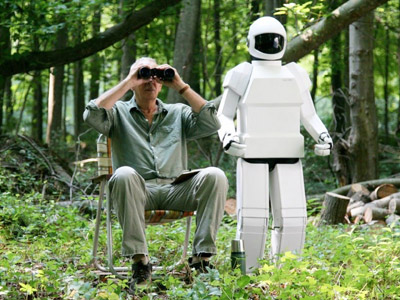 As a thief, not a murderer or rapist as this still might suggest.


For a film that struggled to get made until Frank Langella signed on, this is a hugely impressive introduction for both Jake Schreier and writer Christopher D. Ford. While it follows a well-trodden path, the pair put a wonderfully original, playful spin on proceedings. They've crafted a light and breezy, easily digestible character study that, while offering a steady flow of funnies and antics, isn't afraid to touch on the heavier issues of change, dementia and loneliness.

Much of this lays at the feet of the ever-dependable Langella. On screen for almost the film's entirety, he's a delightful presence - a cynical, future-fearing old coot who refuses to accept his fall into dementia. But he's subtle, sharply funny and has a surprising knack for comedy timing. While Peter Sarsgaard is wonderful as the voice of Robot, barely changing his tone throughout as the straightest straight man in movie history, this is Langella's party.

Aside from a sweet, touching story and a very dependable cast, Schreier and Ford enjoy having some fun with symbolism and the quirky futuristic touches at their disposal. You'll see no flying cars or hoverboards here but instead transparent mobile phones, a super-advanced version of Skype, QR codes on registration plates, robots casually going about their business and a rusty, banged up old Toyota Prius. It's just enough to remind us we are a few years in the future here. 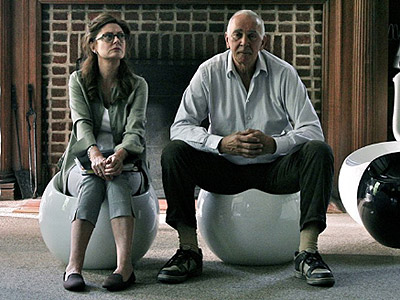 Also, in the future, everyone is uncomfortable.


But it's the strong underlying message about the changing times we live in that is the most poignant and thought-provoking. The library Frank so frequently visits is going through a transition from print to digital – a smart little microcosm of today's society. Meanwhile a growing vegetable garden does a nice job symbolising Frank's blossoming relationship with Robot.

While Frank’s gradual warming to Robot will come as no surprise to anyone, the unexpectedly sentimental ending certainly will, and it's a wonderful journey to be a part of. But what do I know, I saw it months ago.

More:  Robot Frank  Frank Langella  Susan Sarandon  Liv Tyler  James Marsden
Follow us on Twitter @The_Shiznit for more fun features, film reviews and occasional commentary on what the best type of crisps are.
We are using Patreon to cover our hosting fees. So please consider chucking a few digital pennies our way by clicking on this link. Thanks!