Or How I Learned To Stop Worrying And Love The Shining.


Film critics can be a humourless bunch at the best of times, but they're the life and soul of the party compared to film theorists – a group who, by and large, spend most of their working life obsessing with minutiae while simultaneously looking for larger meaning where none may even exist. Personally, I give little credence to that hardcore subset – the kind that seem convinced that Masters Of The Universe is a sickening ode to the Aryan race, or that Finding Nemo is actually really all about genital mutilation in Sudan. I believe most films are made to be enjoyed at face value and at 24-frames-per-second. Not everything has to be something.

Room 237 – or, to give it its full title, Room 237: Being An Enquiry Into The Shining In 9 Parts – is a soapbox for such film theorists, using Stanley Kubrick's 1980 horror classic as the perfect case study for close examination. An elliptical movie of striking beauty, angular symmetry and savage imagery, The Shining practically demands further inspection. Kubrick's adap of Stephen King's book is the ideal control specimen for film theorists to wax lyrical over: not only was the director famously fastidious and obsessive himself – he allegedly used 1.3 million feet of film to shoot it – but also because Kubrick is dead, and dead people can't disprove conspiracy theories. The Shining is the perfect mirror, into which one can stare and make out whatever ghouls and ghosts are looking in. 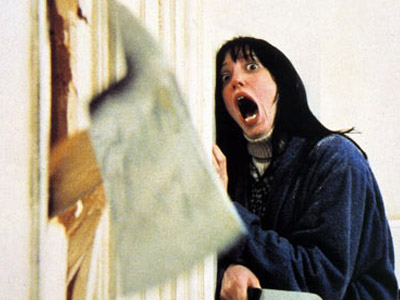 
Director Rodney Ascher has pulled together several film historians, some more respected than others, to share their theories on what they believe Kubrick was trying to tell us with The Shining – aside from the fact that all work and no play makes Jack a dull boy, obviously. Ranging from 'genuinely interesting' to 'total crackpot lunacy', some theories hold water – the Native American allegory, the impossible architecture, the un-characteristic continuity 'errors' – while others are, to put it bluntly, complete and total bollocks. One gent, who sounds like he's a few cans of Red Bull short of a full-on mental breakdown, genuinely believes The Shining was Kubrick's way of confessing to the public that he directed the faked Apollo 11 moon landing footage. Another chap is convinced that the single-frame blocking of an in-tray in front of a man's crotch is a "blatant" erection. Frankly, if it's erections you want to see, I think you'll find them everywhere you look.

Take the guy who speaks intelligently and passionately about Kubrick's longing to make a film about the holocaust, and how The Shining – without us even realising – is exactly that film. You didn't notice? DUH-DOY. Jack's typewriter is German after all, and "nothing in a Kubrick happens by accident". Of course, the very next sentence, the same guy notes that the typewriter keeps changing colour, "which typewriters are not supposed to do". I'm all for the odd chin-stroke, but stick to your own rules, guy.

Then there's the footage unearthed by John Fell Ryan – listed as "performer", "culture-jammer" and "palindromist" – who regularly screens The Shining playing forwards and backwards at the same time (which sounds like an awful waste of 142 minutes and $10 to me, but what do I know, I'm not in a documentary). Yes, you'll see startling images: Jack's face with the twin girls' bodies super-imposed over the top; his howling dark side juxtaposed over his calm exterior. Arresting indeed, but it's a total Dark Side Of Oz situation: one suspects you'd find similar results performing the same experiment on How To Lose A Guy In 10 Days. 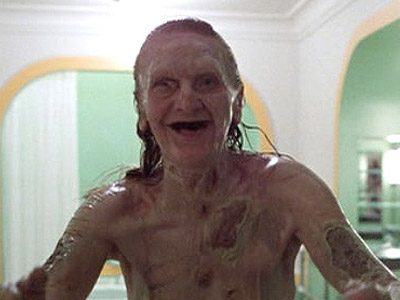 Turns out it does Kate Hudson no favours.


As fanciful as they may be, Room 237 is never less than fascinating while entertaining these notions, no matter how far they stretch credulity; Shining 'expert' Juli Kearns talks endlessly about Kubrick's blatant use of Minotaur imagery, tying in with the film's labyrinthine themes, despite the fact that she's clearly staring at a poster of a skier, not a mythical creature (this claim is literally bullshit). It suggests that Ascher has a sense of humour regarding his film, a trait which frequently stops Room 237 from taking a bloody lift up its own gushing bum. At one point, one voiceover stops mid-theory when a kid starts crying in the other room. We wait for him to settle his nipper before the movie continues – a nice reminder that these... let's say 'passionate' folk have interests other than film.

Though it's lacking a sturdy structure – those nine parts are hardly demarcated – and the inclusion of the wrong-headed ramblings does tend to overshadow the more sensitively argued theories, Room 237 is otherwise a slick and captivating documentary. Who'd have thought it? Put your mad, 10,000-word rant on the internet in point-14 Times New Roman blue on a yellow background and you're just a conspiracy theorist taking up bandwidth. Cut it to some clever editing and some creepy, slowed down music, however, and suddenly people might start to take you seriously.

More:  Room 237  Rodney Ascher  The Shining  Jack Nicholson  Shelley Long  Stanley Kubrick
Follow us on Twitter @The_Shiznit for more fun features, film reviews and occasional commentary on what the best type of crisps are.
We are using Patreon to cover our hosting fees. So please consider chucking a few digital pennies our way by clicking on this link. Thanks!