No internet and a TV that can only pick up a few analogue channels….no, not Christmas at my parents, but the world in which five-year-old Jack and his beloved Ma live. There’s also Bed, Lamp and Rug – the bits of furniture that Jack greets fondly every morning as most five-year-olds would greet their little mates at playschool, making his way around his 10 square-feet room, a space which would probably go for a premium price if it was in the right spot in London. To Jack, it’s the grand sum of his universe, but to Ma it’s the claustrophobic prison where she’s been kept captive as a sex slave for several years by a serial rapist. If you’re easily upset and/or of a sensitive disposition, you’re probably best off seeing Alvin & The Chipmunks: The Road Chip instead.


Room isn’t an easy watch. Lenny Abrahamson’s adaptation of Emma Donaghue’s 2010 bestseller is essentially Fritzl: The Movie: you couldn’t possibly find a bleaker subject, the true horror being that such terrible things have actually happened in the real world. But against all odds, Room still manages to be strangely uplifting, and there is light and warmth beyond the darkness if you can bear to hold on that long. Just try to keep to the back of your mind that your next door neighbour might be hiding something a bit more sinister than jazz mags every time you see him disappearing to his shed.

When the film starts, Jack (Jacob Tremblay) is living quite happily in the magical world Ma (Brie Larson) has created for him, shielding him from her own terror. The first half is told through his eyes and their existence is at first whimsical and oddly charming, from the exercise routines running around their confined space to the snake crafted from saved eggshells. But when those activities also include an hour of screaming loudly for help each day (an unfortunately futile exercise) and pretending to be asleep when Ma’s captor (and Jack’s father) arrives each week to ritually abuse her, Abrahamson shows that evil is literally always around the corner. When a window of escape suddenly appears, Ma has to shatter the fairytale and tell Jack the truth of the world beyond their four walls, and Jack has to deal with a lot more than realising the Tooth Fairy is actually his mum. 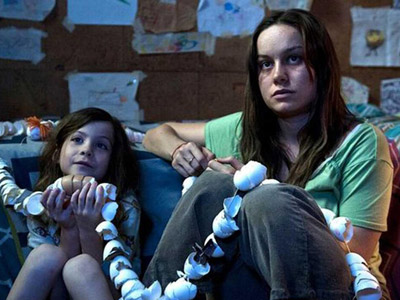 Also, hate to break it to you, but your homemade snake is shit.


Room is about contrasts: the inside and the outside, the light and the dark, and the before and the after. Imagine seeing what happened to Buffalo Bill’s victim after she climbed out of the pit in The Silence Of The Lambs. It’s within these comparisons that Abrahamson’s skill as a director shines, ably showing two points of view simultaneously – the light of Jack’s innocence and the darkness of Ma’s reality. In the beginning we can only see as much as Ma and Jack; we’re trapped in Room as much as they are but Abrahamson still manages to explore every corner whilst also showing its limits, turning the challenge of filming in such a small space into an opportunity to do something visually interesting. As grim as life is in there, it’s almost a shame when Ma and Jack stumble headfirst into the real world for the second half, all bright and noisy and discombobulating.

At the heart of it all are the two amazing performances by Larson and Tremblay, who manage to avoid making the strong mother-son bond overly sentimental and cloying. As Joy, the girl who was kidnapped at 19 and forced into the shed with a bed, Larson gives an incredibly honest and raw performance, to the point of her almost being unbearable to watch as she deals with her pain. When Ma has to pull herself out of her darker days for the sake of her son, you can see Larson actively pulling on the fragile strands she needs keep it all together. 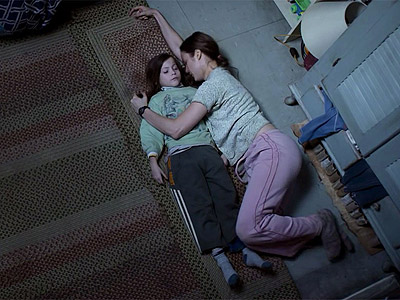 This rug really ties Room together.


Tremblay is equally remarkable giving one of the best and least-annoying performances of a child actor ever seen on screen. As Jack is thrust into the Outside, a million different emotions play across his little face when he sees the sky for the first time and it’s truly astonishing to see.

Room literally runs the full gamut of emotions, diving deep into themes of grief and depression but pure happiness and joy as well – don’t get me started when Jack meets a dog for the first time, because HappyCrying is not a good look for anybody. There is a happy ending of sorts, but at times it does all feel a bit too real. It’s a big ask to stick with Room all the way through, but the ultimate message – that hope will see you through almost anything – is worth the bleak journey to get there.

More:  Room  Lenny Abrahamson  Brie Larson  Jacob Tremblay  Sean Bridgers
Follow us on Twitter @The_Shiznit for more fun features, film reviews and occasional commentary on what the best type of crisps are.
We are using Patreon to cover our hosting fees. So please consider chucking a few digital pennies our way by clicking on this link. Thanks!