People toss around the word "weird" far too easily. "Did you see Inception? When they fight in the revolving corridor? That was so weird!" Sorry, that's not weird - it's imaginative and bold and conceptually brilliant, but it ain't weird. You want weird? A psychotic tyre called Robert, who is inexplicably given life only to roll around the desert, exploding the heads of all who get in his way. That's weird. That's bloody weird.


That's the concept of Rubber, from French director Quentin Dupiex - the man whose sole contribution to world culture so far is Flat Eric, the little yellow headbanging puppet from the Levi's advert. That was under the guise of alter-ego Mr Oizo; I dare say with Rubber - a big hit at Sundance, apparently - he's in danger of making a real name for himself.

Rubber begins in the desert, where a dusty tyre springs inexplicably into life. Robert - as we learn 'he' is called in the closing credits - trundles along the plains, crushing plastic bottles and scorpions until he comes across an uncrushable bottle... which is where his psychokinetic powers become apparent. With a thirst for destruction, he begins his MAD BLOODTHIRSTY RAMPAGE and starts following a French girl with nice boobs. 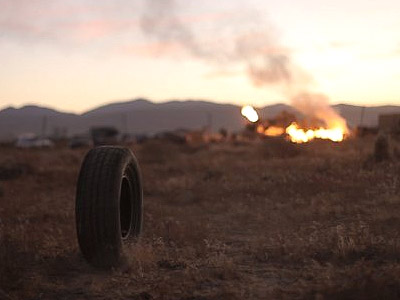 You're looking at one of cinema's greatest monsters.


If you're looking for subtext, there isn't any; there are several meta layers to Rubber but they're only in place to amuse, not to confuse. The movie opens with police Lieutenant Chad (Stephen Spinella) addressing a group of onlookers about the movie they (and we) are about to watch. It is "an ode to no reason" and that's about all the explanation you get. The spectators then gather to watch Robert from afar through binoculars, commenting on everything as they (and we) see it. Half the characters seem to be aware they're in a movie, half are not.

Oh, and did I mention that one of the onlookers is Wings Hauser, '80s powerhouse and star of action classics like Beastmaster 2 and Tough Guys Don't Dance? Because he is. Not that it matters - the human cast are purposefully much less interesting than Robert, who's the most fascinating inanimate movie object since Tom Hanks yelled at a volleyball. Didn't think a rubber tyre could emote? Well, you're right. But this is as close as you're gonna get. 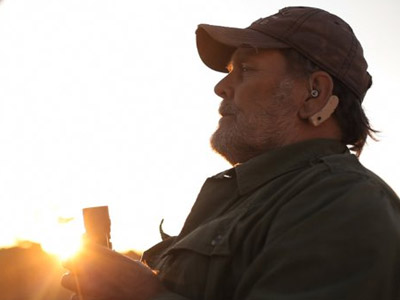 
Rubber nestles neatly in the groove between faux-artsy po-mo bollocks and 'so bad it's good' B-movie trash - it's neither pretentious or lowbrow, but funny, self-aware and crucially, genuinely enjoyable to watch. It feels like the kind of movie Harmony Korine might make if he wasn't such a honking great wanker. Dupiex is obviously quite a character - even his interview on the DVD is recorded in reverse, opposite a blow-up doll. That makes him sound like a bit of a prick, granted.

Like I said, it's bloody weird. Rubber won't be everyone's cup of tea, but as curios go, it's among the more watchable movies about killer tyres you're likely to see this year. Oh, and if Optimum are looking for any DVD cover quotes, then I've got dibs on "Full (Skid)Marks!"

Buy Rubber on DVD/Blu-ray on Amazon.co.uk
More:  Rubber  Mr Oizo
Follow us on Twitter @The_Shiznit for more fun features, film reviews and occasional commentary on what the best type of crisps are.
We are using Patreon to cover our hosting fees. So please consider chucking a few digital pennies our way by clicking on this link. Thanks!