I was all ready to kick off my Runner Runner review with some killer gambling analogies: how it had an ace up its sleeve, or how the action left you flushed, or even that it was just a flop. However, to my consternation, I quickly realised there was no gambling analogy than could adequately describe something so utterly ordinary and unremarkable. In poker terms, Runner Runner is the player who wins an average stack of chips, bets moderately, cashes out even and leaves before the game gets interesting. If it were a poker hand, it would be a pair of sixes. Good luck getting excited over a pair of sixes.


Justin Timberlake plays a smug computer genius called Richie who's far too old to be at the college he attends, but nonetheless struggles to pay for his tuition, gainfully pissing away all of his funds via online poker. When he finds an IMPORTANT PLOT POINT that is HIDDEN IN THE CODE of the gambling website, Richie hightails it to Costa Rica to confront filthy rich poker magnate Ivan Block (Ben Affleck), a man even smugger than he. The two hit it off and soon Richie winds up making millions doing Block's dirty laundry (not literally) and burying his bodies (literally literally). 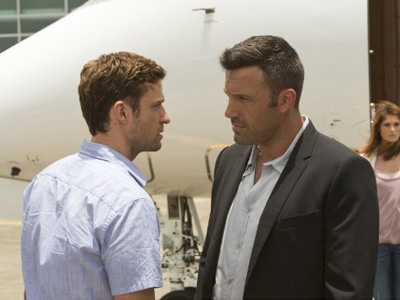 
Runner Runner is a movie that looks quite nice, hums along at a fair old clip and doesn't stumble over any idiotic plot points or feature any particularly bad performances. It is also one of the most forgettable movies I have ever seen. I've seen two separate people say that they look forward to watching Runner Runner on a long-haul flight, and they're exactly right. It's not a film I could ever recommend anyone watch unless they were trapped in a highly pressurised metal tube in the sky. Perhaps it's no coincidence the screening I attended had complimentary bags of peanuts.

Aside from the movie's exotic aesthetic - it's shot like a rum advert, or a music video that a certain bringer-back of sexy might star in - everything else about Runner Runner is bland. Timberlake is the straightest of straight guys, eliciting zero sympathy as he charmlessly paws at Gemma Arterton's staggeringly useless love interest. 'I've not known love like this...' swoons Arterton, unaware the only insight we've had their relationship is five lines of dialogue and a bunk-up in a cabana. 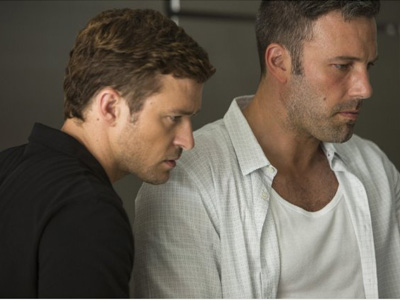 Something mildly interesting happens (off screen).


Runner Runner never quite convinces because it doesn't feel finished. "Ivan finds exactly what you want," seethes a vengeful Timberlake, "and gives it to you." That sounds... nice? That's a sentence in desperate need of an extra clause. All of the characters feel like they were written against the clock. Timberlake's moral barometer goes loopy; one minute he's blackmailing a poker affiliate with a sex tape, the next he's throwing in the towel. Anthony Mackie's FBI agent is a bizarre creation who kidnaps Timberlake in an attempt to turn him but ends up yelling at him and threatening him because his character apparently has to be a badass; hardly the best technique to get a guy on side.

Affleck at least looks like he's having fun, finally at a point in his career where little inoffensive movies like this don't matter. I'm not convinced he makes for a particularly scary tough guy (although obviously he makes for a great smarmy douche) but he adds more to Ivan Block than you know was on the page, with plenty of little improvised touches.

Sadly the character is never called on to be anything more than a bit shady and immoral; a proper villain could have been the aforementioned ace up Runner Runner's sleeve. Instead, Affleck is the... I don't know, he's just... like, the... ten of spades. That's it, I'm out, I fold.

More:  Runner Runner  Brad Furman  Justin Timberlake  Ben Affleck  Gemma Arterton
Follow us on Twitter @The_Shiznit for more fun features, film reviews and occasional commentary on what the best type of crisps are.
We are using Patreon to cover our hosting fees. So please consider chucking a few digital pennies our way by clicking on this link. Thanks!