It is a sad fact of life that, more often than not, the extrovert will receive attention while the introvert goes unnoticed – the loudest person in the room will overshadow the most interesting. From a distance, Ron Howard's F1 biopic Rush appears to be magnetised towards race driver/rock star James Hunt (played by undeniable hunk Chris Hemsworth) as he tussles on the track with rat-like rival Niki Lauda (Daniel Brühl wearing a prosthetic overbite). Hollywood has hard-wired me to believe that beautiful rule-breakers deserve more screen time than unglamorous by-the-bookers, but I'm happy to report that Rush is a surprisingly balanced account of two men who, for two hours at least, make Formula 1 look like the most noble of gladiator sports, and not just a giant Scalextric being played by a bored millionaire.


Unfamiliar with the 1976 F1 Driver's Championship – the last race I watched was Damon Hill triumphing in Suzuka in 1996, and that was only because I was obsessed with the F1 PlayStation game – the tale of the tape between Hunt and Lauda seems tailor made for drama. But while Hemsworth and Brühl embody their respective characters well and Howard's depiction of the era is highly evocative, Rush falls short of greatness due to a final layer of artifice lacquered over the screenplay: an unnecessary Oscar sheen. That's the Peter Morgan difference.

Granted, Lauda and Hunt are equally served by the story. Neither man by himself would make a biopic you'd much like to see, but paired opposite one another, with opposing ideologies – one no-nonsense, the other very much pro-nonsense – they reveal hidden depths in each other that makes for a satisfying narrative. Hemsworth has the playboy swagger of a man who genuinely considers his profession to be the modern-day equivalent of a knight in shining armour – he's cocky and brash, but there's little feel for what that's compensating for. There is no damsel in distress in his story. 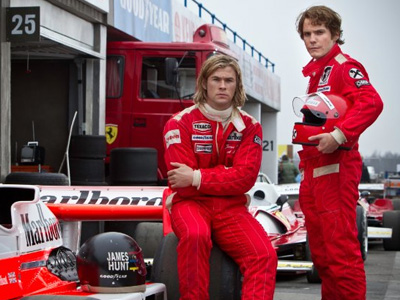 "I can't believe you wore red. Wearing red was going to be my thing."


On the other hand, Brühl is magnificent as Lauda; small, controlled and tightly wound. The excellent make-up transforms the actor from pole position pretty boy to back-row also-ran, but Brühl does sterling work imitating the driver's monotone drawl and permanently pissed off persona. Unlike Hemsworth's Hunt, there are hints of the man underneath the helmet; one scene sees Lauda staring despondently out of his honeymoon suite window on his wedding night, unable to give in to joy because "Happiness is the enemy." It is a fascinating character study, snuck into a awards season crowd-pleaser.

Morgan's screenplay does no disservice to either Hunt or Lauda (the latter even advised Brühl on his performance) but the writer seems unable to let the story tell itself. All too frequently, characters spin awards-worthy monologues; the break-up of Hunt and his supermodel wife is given an overly-tragic dramatic edge, with both parties suddenly capable of elegiac mourning – not what you expect from two people who were probably only together because they were really, really, ridiculously good-looking.

You can forgive the odd mistruth here and there to keep the story streamlined – the rivalry angle would be deflated somewhat if the fact Hunt and Lauda were pre-F1 flatmates was featured – but all too often, Morgan's screenplay over-eggs the pudding. For example, there's the last race heart-to-heart with the team mechanic during a pit-stop: valuable seconds are pissed away while Morgan steals another unearned moment of artificial drama. I can just about believe Lauda was spurred on by Hunt's race victories as he recuperated from his injuries, but having the race on the TV while he's in the doctor's surgery having his lungs vacuumed? Healthcare professionals might consider that an "unnecessary distraction". 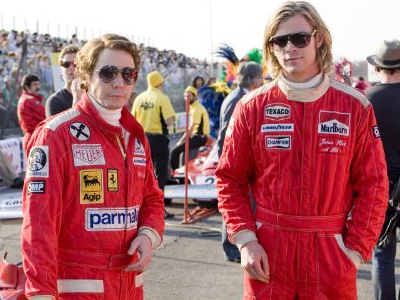 
But then, hey, it was the '70s – people just gave less of a shit back then. Formula 1 might still be buoyant with cash, but it has lost most of its glamour – not surprising when you have facial catastrophes like David Coulthard leering out of the commentary box. Unspoken in Rush's script but more than evident in its aesthetic is the feeling that danger – or more specifically, lack of safety – is what made the sport so exciting. Fans lay by the side of the tracks with cameras; rogue wheels bounce over fences, scattering onlookers; watchers hang from trees to catch a glimpse of their idols. All this texture does a tremendous job of building atmosphere.

Rush truly earns its racing stripes on race day. Viewed through a shimmering heat haze emanating from the tarmac – or through a thick mist of rain pounding the asphalt in the final race of the season – Formula 1 has never looked or sounded more thrilling. Danny Boyle's cinematographer Anthony Dod Mantle slots his cameras everywhere: on the cars, in the cars, under the cars… stopping short of an endoscopy, it makes for hugely impressive visuals, meaning watching F1 on the big screen is 1000% less boring than it is on the small screen. It should go without saying too, but Hans Zimmer's superb score is every bit as crucial to the pulse of the race scenes as the throb of the engines and the screech of the tyres.

Then, just as you're left wondering how a true story can have an ending that still feels like it's from a Hollywood playbook, Morgan can't resist one final nudge into awards territory, with a final scene between Hunt and Lauda that's the equivalent of a 'What I have learned' final paragraph in an essay; a summation of themes which is far too on the nose. "We're like knights!" enthuses Hunt; "You English… such assholes!" grizzles Lauda. It's an unfortunate, eye-rolling ending that does Rush a disservice: the equivalent of putting go-faster stripes on a Porsche.

More:  Rush  Ron Howard  Chris Hemsworth  Daniel Bruhl  Olivia Wilde
Follow us on Twitter @The_Shiznit for more fun features, film reviews and occasional commentary on what the best type of crisps are.
We are using Patreon to cover our hosting fees. So please consider chucking a few digital pennies our way by clicking on this link. Thanks!