Jacques Audiard works exclusively in the field of 'Directing Amazing French Films Which I'm Nonetheless Always Too Tired To Actually Watch'. Determined to break my duck, having utterly failed to watch A Prophet and The Beat That My Heart Skipped since their release, I raced to the first of my morning press screenings at the London Film Festival last month. I was in such a rush to get there, it was only when I sat down in the National Film Theatre that I realise I'd been wearing my shirt inside out. Thankfully, Rust & Bone was amazing and well worth the fashion faux pas: I'm tempted to say it turned me inside out emotionally, but that'd just be a shit excuse for a terrible non-sequitur. There were people shagging in its other screening – I'd kill for an anecdote like that. But I digress.


Marion Cotillard continues a hot streak that started the day she was born by playing Stéphanie, a killer whale trainer who loses her legs in a freak accident, then has to suffer the indignity of nearly drowning with Katy Perry's 'Firework' as her exit music. Legless, loveless and at her lowest ebb, she reaches out to Matthias Schoenaerts' bouncer Alain, a desperate single father living below the bread line, who moonlights as a bare-knuckle boxer to make ends meet.

Together, despite their hardships, they wind up bringing out the best in one another; two paths – one of self-improvement, the other of self-destruction – awkwardly intertwining as one. It is, as Paul Ross might say, an emotional rollercoaster: up one minute, down the next, tossing your heart around like a half-deflated football. It results in an exhausting but rewarding film; tough to watch, but hugely gratifying in the long run. 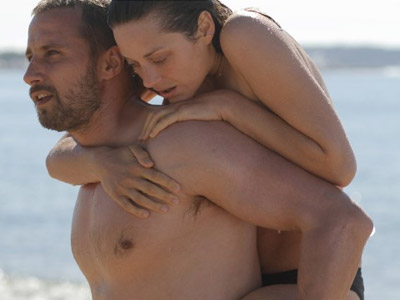 
Rust & Bone might look like the kind of over-earnest disability drama that was built from the ground up with a spare shelf for a Palme d'Or, but it's not half as worthy as its fern-laden posters and Bon Iver soundtrack suggests. That's partly down to two fiercely powerful performances from Marion Cotillard and Matthias Schoenaerts, but mostly due to Audiard's screenplay, which is full of complex characters who don't much care for arcs or catharsis. At no point are we ever asked to judge Alain's choice to beat the shit out of people for a living; Stéphanie's injuries are horrific but Audiard doesn't expect us to pity her. Both actors are both called on to draw from deep wells of pain, but they share a phosphorescent chemistry; the first time Cotillard smiles, she lights up the screen.

Audiard, it seems, is also something of visual genius. There are moments here of such savage beauty, they catch in the throat: a raw tooth, spinning on the deck; the white sun sparkling off the surface of the ocean (as a topless Marion Cotillard swims within); fists smashing through ice as seen from the murky waters beneath. The scene in which Cotillard returns to the scene of her accident is a sequence of such elegance and awe, the thought of it will have you tearing up for weeks afterwards. It is one of many silent shots that say more than words ever could; it's no coincidence that when Audiard's characters speak, they do not have to say much. 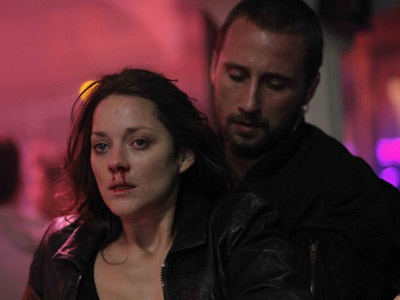 Shouldn't have had that fifth WKD, Marion.


That's where Cotillard and Schoenaerts show their strengths: astonishing depths of character, conveyed by a touch or a look. Theirs is an unconventional love story – one that tries its darndest to convince itself it's something different – but Rust & Bone is achingly romantic in ways that only the French know how. Equal parts brutal and beautiful, don't expect its award shelf to stay empty for long.

More:  Rust And Bone  Jacques Audiard  Marion Cotillard  Matthias Schoenaerts
Follow us on Twitter @The_Shiznit for more fun features, film reviews and occasional commentary on what the best type of crisps are.
We are using Patreon to cover our hosting fees. So please consider chucking a few digital pennies our way by clicking on this link. Thanks!