If time travel is ever invented, the pioneers will travel back to 2012, watch a film or two and think what a bunch of mugs we all were. The mechanics are pretty realistic, they'll say, but Joseph Gordon-Levitt looks nothing like Bruce Willis. They might be charmed, though, by the quaint idea of there being such a thing as an independent film industry, and by Safety Not Guaranteed, which would charm anyone. Even a cyborg replicant hybrid, which is obviously what future-people will be.


What they might think, these future-people eating their future-popcorn, is how refreshing it is to see a time-travel film that is unconcerned with the specifics of how it might work, and more so with the benefits of being the kind of person who believes it possible. Wait, they wouldn't be eating future-popcorn, would they? Because they'd be here in 2012. Unless they brought it with them. But could they? Is popcorn organic matter?

Let's forget that, actually. Using as its basis a real classified advert that asked for a partner to accompany the advertiser on a journey back in time, Safety Not Guaranteed tells the story of Darius (Aubrey Plaza), a magazine intern despatched to investigate the man behind it. She's accompanied by douchey writer Jeff (New Girl's Jake Johnson), and shy Indian guy Arnau (Karan Soni). Before long they track down Kenneth (Mark Duplass), who is entirely convinced that he can time-travel, and believes he is under government surveillance. 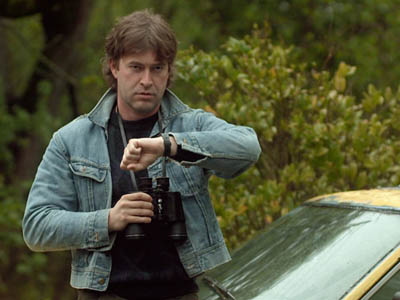 And also that he's Bruce Springsteen.

Initially she humours him, but as she gets further involved in the fantasy world he's constructed, the sardonic demeanour Plaza has perfected on Parks and Recreation gives way to the thrall of finally being around someone who is passionate about something. You could look at this as a commentary on disengaged youth and its arm's-length contempt for enthusiasm if you liked. I would if it didn't make me feel so very old.

This is the key, though: Darius goes along for the ride with Kenneth not because her life is so bad that she wants to leave it and live in another time, but because she meets in him someone prepared to embrace possibility, unlike any of her peers. An excellent actor, Plaza teases out this burgeoning sense of wonder through little cracked smiles when exploring with him. She doesn't necessarily even believe it's possible herself, but the journey is about not settling for the humdrum, just as is Roy's in Close Encounters of the Third Kind. 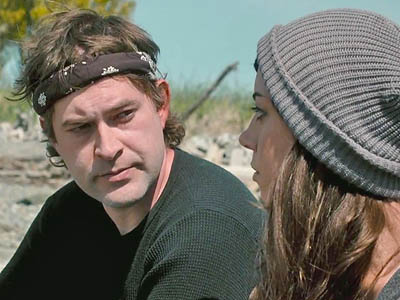 "When you went back in time, it was to the eighties, right?"

A subplot in which superficial Jeff hooks up with an old, now chunkier, flame from high school and learns how it's what's inside that counts could have felt irrelevant, but sustains itself through a satisfyingly full performance by Johnson. Another in which the Indian guy learns to be less stereotypically Indian is less necessary.

But in the main arc, you'll find a lot to enjoy in the two leads' performances, and a focus on character that means the future-people might think twice before calling it a time-travel movie at all, come to think of it. If they complain to me, I'll tell them it's in the time-travel films category on Wikipedia, so they can fuck off back to the future. And they'll say, "Wikipedia used to be a website? We got it implanted into our brains back in 2025."

More:  Safety Not Guaranteed  Aubrey Plaza  Mark Duplass  Jake Johnson  Colin Trevorrow
Follow us on Twitter @The_Shiznit for more fun features, film reviews and occasional commentary on what the best type of crisps are.
We are using Patreon to cover our hosting fees. So please consider chucking a few digital pennies our way by clicking on this link. Thanks!