The modern disaster movie is at an impasse, and no amount of hurling Dwayne Johnson at it will succeed. There isn't a disaster you can think of - whether it's from the pit of the Earth or the darkest realms of outer space - that can't be rendered by a room-full of under-fed, under-paid GFX nerds in California. The only limit, therefore, is imagination, and sadly, San Andreas is a movie that's barely capable of coherent or rational thought. Director Brad Peyton borrows a series of second-hand set-pieces from the Roland Emmerich playbook; with buildings collapsing left, right and centre, San Andreas doesn't so much evoke powerful 9/11 imagery as it recalls entire sequences from other, better movies.


Earthquakes! Now that I've got your attention, San Andreas sucks. It's one of the most cack-handed disaster movies I've ever seen; it aims to lean heavily on cliche and convention but ends up pulling a Delboy and falls straight through the bar. San Andreas is a movie that's so disgustingly convoluted, it features a scene in which Dwayne 'The Rock' Johnson crashes his helicopter into a clothes store just so he can change his shirt. 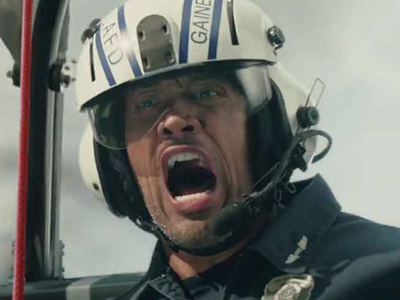 I GOT POOP ON IT, HURR


Let me rewind so you can enjoy the complexity of San Andreas' plot. Dwayne Johnson is introduced in the opening sequence as a rescue chopper pilot with over 600 confirmed rescues, which apparently means he's earned the right to pull a sickie on the day of the biggest recorded earthquake in human history to hunt for his ex-wife and daughter. Rather than collect them and stand in a doorway for the duration (yeah, like The Rock could fit in a doorway), Johnson actively encourages his daughter to head towards more danger just because it was the only meeting place he could think of. Never mind that 43-year-old Johnson's daughter is played by 29-year-old actress Alexandra Daddario (reminder: The Rock looked like this when he was 14).

Once you establish that the movie's characters are as pigshit thick as the movie's writers, San Andreas becomes an exercise in spotting the clichés among the cast members. There's the gruff hero; the ex-wife who won't stay an ex for long; her new partner who is required to excel in douchebaggery; the daughter in the mold of Maggie Grace in Taken; the foppish love interest you want to die instantly; the annoying kid tagging along; the crying lost child whose rescue dooms a secondary character. These are caricatures so paper thin they'd struggle to remain intact during a slight breeze, let alone an earthquake. Naturally you spend the entire movie willing the earth to open up beneath their feet and swallow them for the good of humankind.

Let's single out Ioan Gruffudd's role as Carla Gugino's new partner, the man who stepped into The Rock's size-16s. Convention says this guy can't ever measure up to the hero, so he must - must - be an asshole. San Andreas seems to subvert this trope in an early scene where Gruffudd's architect explains his good intentions to Johnson's daughter, dropping the movie's worst line into the mix to boot ("I guess the reason I never had any kids," he says, flicking through a glossy manual of his own buildings, "is that I was too busy raising these!"). But once the rubble starts falling, Gruffudd inexplicably turns into an evil, selfish coward with no value for human life. It's all so desperately, transparently shit. 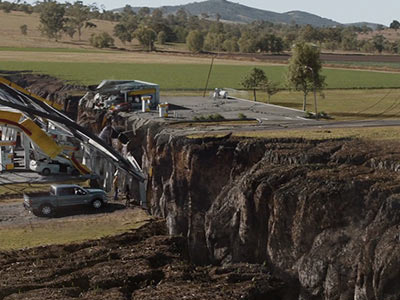 
A good disaster movie can excuse these problems, or at least ride them out, by adopting the correct tone: a knowing wink here, a nudge there, characters that make it clear through humour that they have a slight inkling they're in a silly movie. 2012 is a good example: you can't watch that movie, with Woody Harrelson's pickle-eating conspiracy theorist, and tell me Emmerich didn't know he was making a fun movie. San Andreas, on the other hand, is arid like the fucking Arizona desert. Dwayne Johnson gives a performance that approaches Leslie Nielsen levels of straight-face. Here is an example of a conversation he has with his wife, mid-disaster:

CARLA GUGINO
What are you going to do?


Carla Gugino, for her part, spends the entire movie giving underwhelming reactions to greenscreens standing in for cataclysmic disasters; at one point, she and Johnson float through the debris of a city in ruins and Gugino's expression is the kind you'd normally see on a stressed mother upon finding out her young child has emptied his toybox on the floor.

There are a handful of moments that make you sit up and take notice, and for the right reasons; one terrifying shot of a skyscraper collapsing, roaring like a falling giant, is seen from a rooftop PoV; there's also a nice surprise for Johnson when he attempts to clear the crest of a tsunami wave in a speedboat. The rare scenes where the camera stays with the characters as they fall with debris are devastatingly effective; Gugino goes from the top floor of a building to the not-so top floor and Peyton's refusal to cut is the smartest, most effective decision he makes over the whole movie. 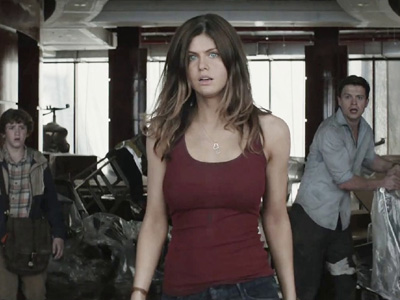 
Elsewhere, it's one boneheaded convolution after another. Dwayne Johnson meets a sole citizen who happens to own a nearby plane. Dwayne Johnson immediately bumps into his lost daughter in the flooded rubble of a city that's home to a population of 837,000. Paul Giamatti's Science Dude invents an earthquake predictor that predicts earthquakes about 10 seconds before they happen. Then he tries to "hack the media" to warn the public but winds up somehow getting a proper slot on CNN. Daddario heads towards a building constructed by her evil step-dad even though it is clearly still under construction and half-finished and covered in scaffolding. Plot holes yawn the size of canyons. You try to throw yourself in but the ushers are frowning at you because you are yelling.

Then, at the end, the American flag unfurls itself from the Golden Gate Bridge and flutters poetically in the breeze and everyone does their earnest 'we have to rebuild' faces and you just think, oh fuck this.

More:  San Andreas  Brad Peyton  Dwayne Johnson  The Rock  Disaster Movies  Carla Gugino
Follow us on Twitter @The_Shiznit for more fun features, film reviews and occasional commentary on what the best type of crisps are.
We are using Patreon to cover our hosting fees. So please consider chucking a few digital pennies our way by clicking on this link. Thanks!