That James Cameron fella likes his underwater exploration, doesn't he? I'd be willing to bet bath time with JC would be an intrepid adventure to find the soap (rated 12A). First came The Abyss, then Titanic, then 3D Titanic doc Ghosts Of The Abyss and now Sanctum 3D, Cameron's exec-produced new waterbaby about a cave-diving expedition gone awry. Something tells me Avatar 2 might be a little bit soggy.

As someone who is claustrophobic - or at least assumes they are claustrophobic because the thought of being trapped in a tight space makes me FREAK OUT AND FLAIL MY ARMS AND LEGS - this kind of film has a grim hold on me before it's even begun. It's a survival story first and foremost, telling the 'true' story of a band of spelunkers who escape certain death when the cave system they're exploring floods. But really, it's a horror movie, full of people getting wedged in confined spaces, holding their breath and generally going out of their way to make me shift in my seat and sweat profusely. 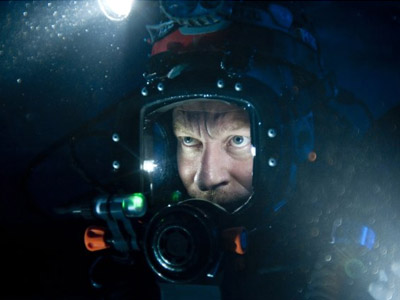 "It's madness, Frank! You can't furrow that brow any further!"


With King Cameron and his Scrooge McDuck-esque gold mines bankrolling the film, the production values are unsurprisingly very impressive and the 3D, refreshingly, is spot-on - rather than thrust objects out of the screen, it draws you in with cavernous depth-of-field. Sadly, the stunning visuals can't distract from the awfully clunky cast, who display Ramsay Street levels of acting ability and read from a script that's been torn straight from The Big Book Of Disaster Movie Clichés.

You can play a fun game during Sanctum's plodding, flood-free first half, in which the aim is to count how many seemingly harmless non-sequiturs will wind up being important in the second half. Here's a couple to get you started:

- Kid with daddy issues: "Look at this pointless torch Dad gave me. This couldn't possibly come in handy in a situation in which light will be of the utmost importance." (*roll eyes*)

If you've seen survival pseudo-docs like Touching The Void, you'll know that there's no need to supplement ACTUAL TRUE REAL-LIFE STORIES OF ACTUAL DANGER with artificial drama, but Sanctum ladles it on until all aspects of reality are washed away. There's the estranged father and son combo, the diver with questionable health, the extreme sports billionaire (who couldn't possibly come a cropper) and even a disposable ethnic guide. Each new scene is lit up by a honking great narrative signpost, so you'll second guess every single event minutes before it happens. 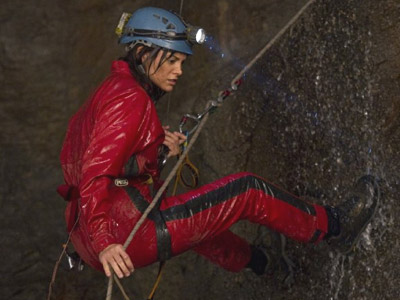 
Sanctum is structured more like a videogame than a movie. Move on to the next level, face new obstacle, lose a life, complete mission, move to next level. With each member of the team who dies, the grieving process is reduced further, so by the end of the movie, mourning is restricted to around 8 seconds, lest the level countdown clock run out. There's even an end-of-level boss - a low point of screaming lunacy in a movie that apparently prides itself on its 'true' credentials. I've had wet dreams that were more realistic.

Such silliness would be forgivable if Sanctum had the good grace to adopt the tone of a Roland Emmerich-esque disaster movie, but it's resolutely pompous throughout. Richard Roxburgh's alpha male has the unappealing trait of humanising the cave like it's a particularly cranky fishwife, spouting gravelly nonsense like, "Respect the cave!" and "The cave doesn't give a rat's ass about your feelings!" If you love the cave so much, mate, why don't you fucking live in the cave - you two deserve each other.

It's this continuing clash between laughably poor acting and ultra-serious brow-furrowing that renders Sanctum unintentionally hilarious, thereby deflating it completely. It'll have you gripping your armrests in some scenes, but actively wishing death on the characters in others - which is probably not what James Cameron intended when he put his name to it.

More:  Sanctum 3D  James Cameron
Follow us on Twitter @The_Shiznit for more fun features, film reviews and occasional commentary on what the best type of crisps are.
We are using Patreon to cover our hosting fees. So please consider chucking a few digital pennies our way by clicking on this link. Thanks!