Confession: creating the above photo made me laugh far more than it should have.


That's as good an introduction as any for a review of a film that - while stylish and home to some great comic beats - ultimately feels mediocre and flat. Seen as many as a return to Natural Born Killers territory for Oliver Stone, Savages is actually a watered down tale of drugs and sex that focuses more on offbeat humour than ripping guys' heads off and sticking them on spikes. More the shame.

Taylor Kitsch continues his work in the lower spectrum of this year's cinema releases by playing Chon, a hardened ex-soldier whose business partner, Aaron Taylor-Johnson's mellowed-out and dreadlocked Ben, has created the best cannabis in LA. When the pair turn down a business deal with Mexican drug lord Salma Hayek and her ruthless right-hand man Benicio del Toro, their shared girlfriend Ophelia – or simply 'O' (Blake Lively) – is kidnapped. Cue a fumbling plan to rescue her involving deceit, guns and an erratic, balding John Travolta for some reason. 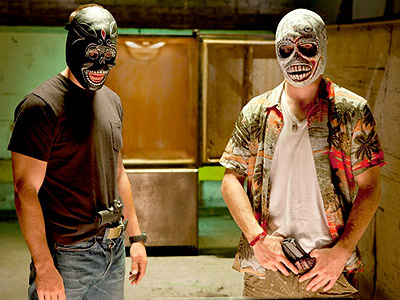 
From the offset, Savages seems out of touch with its audience as we're introduced to O's infuriatingly omniscient narration with the line "Just because I'm telling you this story, doesn't mean I'm alive at the end of it." It makes you want to shout "I get it - this isn't my first film. Just get on with it." Throughout, the clunkers keep on coming; O's voiceover as a dead-eyed Chon pounds away at her - "I have orgasms, Chon has wargasms" - is destined to go down as one of 2012's worst lines.

And yet, from time to time, the film redeems itself. Taylor-Johnson is particularly good as Buddhist Ben, the calm voice of reason to Chon's man of violent action, proving himself to be a versatile actor, even if Ben isn't really all that much of a stretch. Standout performances come from del Toro as the ever threatening Lado, a sleazebag killer with Anil Kapoor's hair. Then there's Travolta, who switches up between desperate exasperation and 'man in the know' so frequently that I honestly can't tell if he was turning in one of the best comic performances of his career, or one of the worst performances of anyone's career ever. It's probably the latter.

Meanwhile, Salma Hayek phones in a terrible villain and Emile Hirsch... well he certainly showed up, and was presumably on time. Yes, any credit for Hirsch's involvement in this film has to be for his punctuality, because I have no idea what else he was doing on screen.

At least Stone's direction allows the film to be visually interesting. With occasional surreal sequences that helps lend O an ephemeral quality during head-spinning moments of the script, Stone flits between desaturated and oversaturated colours; a vibrant palette that help Savages become as stylish as everyone was hoping.

It's just a shame that the rest of the movie is bit of a mess, as if it's trying to make a particularly important point without ever really knowing what it is. The very character of Ophelia, for example - complete with frequent references to Shakespeare without ever really drawing parallels between the two - is presented as the main character, then spends most of the film sidelined. For what purpose? So that her pointless, infrequent narration could lend the film an air of importance? Who knows. 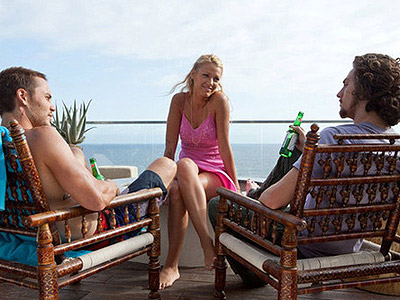 Or maybe it's just the controversy of a three-way relationship. WOAH.


Frustratingly, there is the suggestion of a far more interesting story to be told here in Ben having to eschew his Buddhist beliefs and moral values by turning to violence and bloodshed in order to rescue O. This crumbling of a young guy's fabric, seeing him become a man significantly different to the one that O loves to begin with, is unfortunately barely hinted at, marginalised in favour of oddball humour and guns and action and stuff.

Between the piss-poor dialogue, scripting issues and an unforgivably confusing 'cheat' ending, the film is a tonal disaster; one that will have you rolling your eyes so many times you'll get dizzy. And yet... and yet... there's still some fun to be had here if you forget the connotations of 'the new Oliver Stone movie' and try to enjoy the ride. You just have to go in with tempered expectations, the kind of which are capable only by more sophisticated minds than mine.

More:  Savages  Oliver Stone  Blake Lively  Taylor Kitsch  Aaron Taylor-Johnson
Follow us on Twitter @The_Shiznit for more fun features, film reviews and occasional commentary on what the best type of crisps are.
We are using Patreon to cover our hosting fees. So please consider chucking a few digital pennies our way by clicking on this link. Thanks!