As obvious an awards tilt as Disney knows Saving Mr Banks to be, it seems more of a mid-budget passion project. How better to venerate its beloved founder than have cuddly ol' Tom Hanks play him? But transparent self-promotion aside - this is Disney, after all - what's really interesting is how it plays out as white-washing advocacy for the process of Hollywoodizing a popular product, using emotion rather than reason to sweep you along and make you root for the studio. And the fact that the film is itself a Hollywoodization of true events.


This is a story about a corporation buying and homogenising a commodity before selling it on at a profit. But hang on: isn't big business supposed to be the enemy? Would you cheer along as you watched a film in which Starbucks executives gleefully drove small competitors out of business? Hollywood cinema, and most narrative art, in fact, is generally left-leaning: powerful corporate characters are always shown as greedy plutocrats; conservatives usually as crazed Bible-thumping homophobes. So exceptions like Saving Mr Banks, in which the hero is the billionaire trying to make the little guy see sense and sell up, don't half stick out. 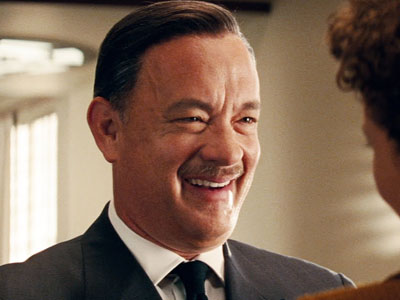 I will have your money, for I am Disney.


Here's the little guy: P.L. Travers (Emma Thompson), author of the Mary Poppins books, almost out of money but determined not to sell her beloved creation to Disney, despite years of overtures. Eventually convinced, but maybe with an agenda to disrupt the process so much that they just give up on the adaptation, she flies to Los Angeles to work on the script with the writers. Walt Disney gives her the soft-soap but finds her impervious to his charms. Throughout this we regularly cut back to her childhood in Australia, and learn how her fun-loving but irresponsible father (Colin Farrell) left her with a lifelong antipathy to whimsy, which is why she's so opposed to Mary Poppins being co-opted as a musical with animation.

There's an obvious source of comedy here - the stuck-up Englishwoman juxtaposed with the chirpy Americans - and it's mined over and over again. This is very funny, but would quickly wear thin if not for Thompson, who plays it with total conviction and investment, and expertly demonstrates the inevitable, gradual softening of her character. There's a wonderful scene, the sort of wordless emotional communication she so excels at, when she drinks tea at a bar and notices, looking at everyone around her, that they're all having fun and she isn't. Where has all this propriety got her?

But because you know she's so capable of nuance like this, it makes the childhood flashbacks take on a sort of sledgehammer effect, driving home her daddy issues rather too hard, and it seems a shame. The cuts from the present back to Australia are usually done at some prosaic point of visual synthesis between the two, making the intent to compare too obvious. 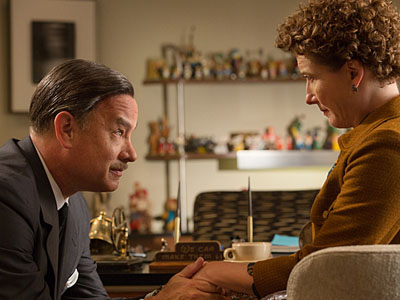 
Subtlety isn't really the point though: we're after emotions, and that's where it plays on your knowledge, and assumed love, of Mary Poppins. Its chief weapon in this is the songs, which are, as they always were, an uplifting delight. Travers is finally swept away by 'Let's Go Fly a Kite' and, despite the knowledge that this was the point at which the corporate behemoth has won, I bloody nearly cried.

In real life, Travers never fully acquiesced to the Disney juggernaut, and fell out with Walt, never allowing any more of the Poppins books to be optioned for sequels. Here that's unsurprisingly glossed over, although to its credit it stops short of pretending she was ever completely happy about it. Hanks, in a key scene in which he finally makes his case successfully, does very well to get across the idea that Disney was genuinely passionate about the books (don't forget, he made for a sympathetic CEO buying out competitors in You've Got Mail, too), but did Walt hold them so dear in real life? It's irrelevant really: everything is now Disneyfied: the story of Mary Poppins, and now the story of its author.

There's nothing especially wrong with a celebration of corporate success. In many ways you'd think there'd be more of them - Hollywood is, after all, run by corporations - but John Lee Hancock's film is strangely anomalous in this regard and it's a little distracting. For me it serves to highlight, by providing an exception to the rule, how regularly we see stories like Erin Brockovich, in which big business is defeated to cheers, even though the film's distributor is one of those multinationals we're being encouraged to hate. As a piece of storytelling, though, Saving Mr Banks uses some slightly blunt tools, but is ultimately transcendent and enormously enjoyable. I just worry that liking it makes me a corporate stooge.