Scott Pilgrim Vs The World

The next time someone tells you about how 3D is the future of cinema, sit them down in front of Scott Pilgrim Vs The World, preferably on the biggest screen you can find, and watch their jaw hit the floor. Here we have a film that's so sharp, so visually stimulating and so whip-smart, it positively crackles with energy. It may well be the best-looking movie of its generation. 3D is where it's at, huh? Spare me. The future of cinema lies in the hands of filmmakers like Edgar Wright.

Wright has proved to be a master of splicing genres in his brief career so far. With Shaun Of The Dead, he made the correct assumption that zombie movies could be funny; with Hot Fuzz, he dared suggest that action movies were equally ridiculous. Scott Pilgrim sees Wright mix action, music, comedy and romance to whip up his most dizzyingly brilliant creation yet. A love letter to the digital generation, it's aimed at big kids for whom videogames and movies were as much a part of their upbringing as books and TV - as such, it instantly makes the current crop of retro throwbacks look jurassic in comparison.

[gallery]Based on Bryan Lee O'Malley's series of seven comic-books, Scott Pilgrim Vs The World is pleasingly episodic in nature. Bassist in an awful garage band named Sex Bob-Omb (one of many Nintendo references), gangly Toronto youth Scott Pilgrim (Michael Cera) meets multi-coloured indie princess Ramona Flowers (Mary Elizabeth Winstead) at a party and decides she's the girl of his dreams. Unfortunately, to date her, he has to fight and defeat her seven evil exes in a succession of spectacular battle sequences. Why? Because it makes for some awesome fight scenes, that's why.

Wright is the perfect choice to bring O'Malley's comic-book panels to life on the big screen. The director's talents with transition removes all element of static from the books - Scott Pilgrim is a movie that can't stop moving. Many have levelled criticisms at Wright in the past for being hyperactive and jittery and they're not completely unfounded, but Scott Pilgrim suits Wright's ADD style of editing down to the ground. When you've got seven books to motor through in two hours, it helps if you can keep the tempo high.

It's clich', but truly, you've never seen a movie quite like this. Fight scenes play out like the best videogame brawlers you've ever played, complete with health bars, on-screen prompts, high scores and brutal slow-motion knock-outs; opponents burst into coins upon defeat; musical numbers throb with a visible sonic overload. Even the less frenetic moments, like Scott and Ramona's floaty first kiss, come stacked with inventive detail. Wright's mastery of the frame is evident throughout; there isn't a single second that isn't impeccably crafted down to the last pixel. He is to visuals what Tarantino is to dialogue.

Eye-candy is all well and good, but Scott Pilgrim has the smarts to go with its good looks - it's genuinely clever and funny. O'Malley's quips hold up well on screen (Kieran Culkin's gay best friend Wallace Wells gets the best one-liners) but much of the humour comes from the inherent ridiculousness of the universe in which the movie resides; a kind of hyper-real extended videogame cut-scene, complete with knowing winks to camera. One scene, in which Scott readies himself for a fight, flashes past in a trademark Edgar Wright series of smash-cuts - then pauses for an age while Pilgrim neatly ties his shoelace. Cute.

Michael Cera is usually a take it or leave it kinda guy, but he's put to good use here, playing up the more tolerable aspects of his slacker persona (awkwardness, adorable self-consciousness, gormless naivety) while ditching the straight-man shtick. How can you not love a lead character who proudly announces he's learned the bass line from Final Fantasy II? Or one so sensitive about his stupid haircut? He's a well-drawn (arf) protagonist, flawed but well-meaning, and Cera's deadpan delivery and dreamy demeanour serve him well. 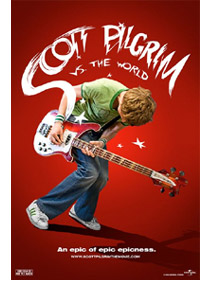 The rest of Wright's casting is also spot-on, with special mentions going to the evil exes. Satya Bhabha sets the OTT tone as fashion-conscious ex-boyfriend #1 Matthew Patel; former Superman Brandon Routh has a ball as rival bassist and uber-Vegan Todd Ingram (who literally doesn't know the meaning of the word 'incorrigable'); but it's Chris Evans' chin-strapped douchebag movie star Lucas Lee that gets the most laughs, and bizarrely, the least screen time. "He's good, huh?" he growls, referring to his punch-drunk stunt double. "Sometimes I let him do the wide shots when I feel like getting blazed back in my winnie." I'd gladly pay money to see Lucas Lee's 'Action Doctor' on the big screen.

You may question Winstead's interpretation of Ramona Flowers at first - sour-faced and aloof, she's like an emo version of Kate Winslet in Eternal Sunshine - but one brief extreme close-up later, when she cracks into a smile and her huge watery eyes fill the screen, you're sold: she's an angel in goth's clothing. Scott's own ex, Knives Chau (Ellen Wong), arguably makes a bigger impression, played like a wide-eyed Manga schoolgirl made flesh. It's not often that female characters are quite so rounded in a movie aimed at a geek demographic, but Scott Pilgrim's gender balance is just right.

1,000 words in and I've still barely scraped the surface of why Scott Pilgrim is one of the best films of the new millennium so far. How about a score composed by Radiohead producer Nigel Godrich, songs written by Beck and performed by bands like Broken Social Scene? How about Jason Schwartzman, expertly cast as a smarmy music producer and end-of-movie boss? How about a battle of the bands in which a sonic yeti and swirling dragon do battle above an adoring crowd? How about the videogame references and easter egg musical cues? It's almost too much awesome to absorb in one sitting.

Scott Pilgrim's tagline is "An epic of epic epicness" - that just about covers it. Pulsating with the energy of youth and radiating with charm, it's the best videogame movie ever made - even though it's not actually based on one. Witty without being cheap, quirky without being twee and the very epitome of cool, Scott Pilgrim is that rare kind of movie: one that hasn't been diluted for a mass audience, but tailor-made for a very specific one. Frankly, us geeks have never had it so good: Scott Pilgrim Vs The World is modern cinema at its most exciting, and it belongs to us.

More:  Scott Pilgrim Vs The World  Edgar Wright  Michael Cera  Mary Elizabeth Winstead
Follow us on Twitter @The_Shiznit for more fun features, film reviews and occasional commentary on what the best type of crisps are.
We are using Patreon to cover our hosting fees. So please consider chucking a few digital pennies our way by clicking on this link. Thanks!