Unlike its namesake, a game for the Megadrive in which a ninja and his dog beat up a lot of other ninjas, James Marsh's Shadow Dancer is about the Troubles. This puts me in the awkward position of having little background knowledge of the Troubles to contribute, largely because I spent too much of my youth not doing my history homework so I could play Shadow Dancer on the Megadrive. You can see the bind I'm in.

But anyway, if you want to know about the Troubles, you know where Wikipedia is. My historical ignorance aside, I know a tightly-wound thriller when I see one. Shadow Dancer is certainly this, but while its director (he of Man On Wire) knows a thing or two about tension, he too often leaves us in a smoky room full of bearded guys talking, when we want him to get things moving. 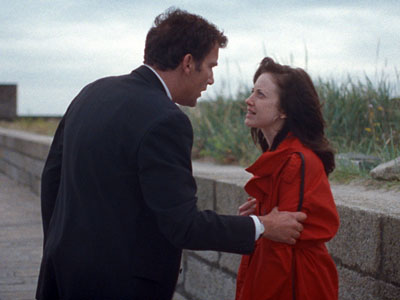 
We kick off with a scene in which Colette McVeigh (Andrea Riseborough) attempts to plant a bomb on the London Underground. Marsh simply puts the camera up close and lets us watch her uncertainty play itself out on her face, eventually giving way to grim conviction as the train rumbles on. With no dialogue for ten minutes or so we're doing nothing but look at her and wonder what led her here. It's unbearably tense. Within minutes she's been picked up by a couple of heavy-set guys and led off to a nondescript room in which MI5 agent Mac (Clive Owen) tells her she can go to prison and never see her son again, or become an informant against her family.

As much as this opening is explosive (sorry), what follows, in which they both become pawns in their own ways, struggles to deliver on its promise. Back in Belfast, menacing figures flit in and out menacingly, looking menacing (David Wilmot's IRA enforcer Kevin, shot almost always in close-up, is bloody terrifying in particular), and Colette's brothers begin to wonder who they can trust. One of them, played by Aiden Gillen, is an intimidating presence too, but his point is never quite realised. 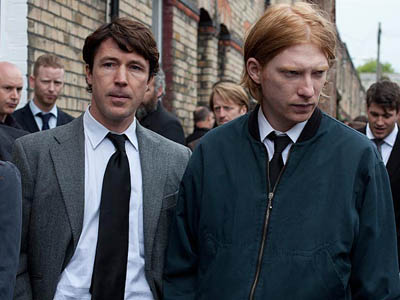 
On the plus side, Riseborough's is an excellent performance; full of steely resolve and icy calm under pressure, when she could've taken a more obvious route and played Colette as a mother looking out for her son first and foremost. A scene in which she watches the boy ride a new bike around the back of the house when she's deep into her double life gives you the impression this is the first respite she's had in months.

But all of this happens very slowly, most of it involving people in rooms talking in veiled threats over and over again, and by the time it pays off – which it does, in fairness, with an excellent twist – you've kind of lost interest. I had, anyway. But this might have just been because I was expecting Clive Owen and a dog to be fighting a load of ninjas.

More:  Shadow Dancer  Clive Owen  Andrea Riseborough  Gillian Anderson  Aidan Gillen  Domhnall Gleeson
Follow us on Twitter @The_Shiznit for more fun features, film reviews and occasional commentary on what the best type of crisps are.
We are using Patreon to cover our hosting fees. So please consider chucking a few digital pennies our way by clicking on this link. Thanks!