The marked increase in comic touches in the New Year's Day episode pointed the way and tonight we got it: a flat-out Sherlock comedy. A wedding comedy, no less, with a bungling best man to boot. I enjoyed it a lot, but I couldn't help thinking it's hard to get away with this sort of thing when you're only doing three episodes every two years.


The chief criticism I saw of The Empty Hearse was that it spent so much time dancing round the how-did-Sherlock-do-it issue that the Parliament bomb plot seemed a bit of an afterthought. Which is probably fair, although with two years' anticipation it didn't have much choice, and was very well written with that in mind. Four days later, with an audience expecting a return to the usual format, Mark Gatiss, Steven Moffat and Stephen Thompson gave us something completely different. You've got to admire their moxy.

This was an episode unlike any other: even more jump-cutty than usual, flashing back and forth in time and all over the place, daring you to forget where the anchor was. In case you did forget, it was Sherlock doing his best man's speech on Watson's wedding day, taking in a brilliantly funny stag night where the two of them got pissed and played the Rizla game, Sherlock's vetting of the guests (his hilariously nihilistic influence on a young boy the highlight) and some flashes of old cases, giving the overriding sense that surely this all had to be going somewhere. At one point I thought, Christ, this is the bravest bit of writing I've ever seen: it's going to be a whole episode just about their relationship, without a crime to solve. It wasn't, obviously, and if anything I understand even better now why the BBC rejected my spec script for an episode of Holby City in which no one gets taken ill. 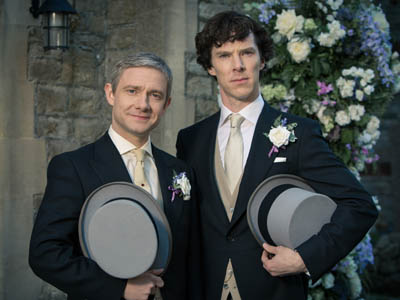 
Yes, it was going somewhere, and its strands were tied up expertly by the end, but while it was at it, it really went for it as an all-out comedy. It didn't fall short, either: I laughed out loud several times, but I was surprised by the sheer extent of the shift in tone.

I wonder how much responsibility you'd feel, as the writers of one of the BBC's flagship drama series, to deliver something recognisably in-keeping with your vast audience's expectations. Less so with Doctor Who, I'd imagine, because of the longer episode run, greater frequency of seasons, and built-in science-fictional licence, in any case, to put your characters anywhere in space and time. More episodes means more time to build up to an off-the-wall one, and then more subsequently to bring the audience back again afterwards. Breaks in tone aren't so radical if the episode only makes up ten per cent of the whole season.

What about a third of the whole thing, though? Three 90-minute episodes every two years, and you decide to make one of them utterly mental? That takes some stones.

I spend far too much time complaining that British TV doesn't take enough risks, and so I'm not about to start moaning that Sherlock should be sticking to a tried-and-tested villain-of-the-week format. But I do wonder if an opportunity's being missed somehow. With so long between such short seasons, you're under pressure to deliver "event TV" and make a significant mark with each, and maybe a comedy episode - which this undoubtedly was overall - subtracts from that. 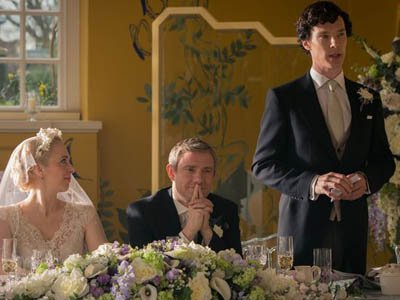 "Funny story about the groom: he spent years wandering around New Zealand looking for a fucking ring!"


There's perhaps a little danger too in the emotional development these characters are going through. This is great in and of itself; there's too much potential in them, and the actors are far too good, to leave them as one-dimensional crime-solving machines. But if we're starting to care about Sherlock feeling lonely now his friend's married, do we get a hasty emotional pay-off next Sunday? Or do we have to wait two years for it, our connection to him fading all the while?

Ultimately, there are no good answers to these questions. And frankly, I might do best just to belt up and enjoy it. (As a below-the-line commenter said, brilliantly, to a reviewer on Digital Spy recently, "I think you've watched this with too much of a critical eye.") It's a shame that we don't get enough time with these characters, but what we do get is never less than remarkable.

More:  Sherlock  Benedict Cumberbatch  Martin Freeman  Mark Gatiss  Steven Moffat  BBC
Follow us on Twitter @The_Shiznit for more fun features, film reviews and occasional commentary on what the best type of crisps are.
We are using Patreon to cover our hosting fees. So please consider chucking a few digital pennies our way by clicking on this link. Thanks!