A movie all filmed in one long continuous take? Putting aside for a moment the technical cheats actually used to achieve this (it was really filmed in 10-minute sections and carefully edited), it sounds like an interesting experiment, non? Like that time when we all thought that staring at Ryan Reynolds in a box for 90 mins couldn't possibly work. Unfortunately, this time it really, really doesn't. It turns out that there's a reason why directors cut away to other stuff: to prevent our brains from haemorrhaging in protest.


The whole 'one take' idea is the worst kind of movie gimmick. It does nothing to aid or advance the plot – it only serves to act as an obstacle; an annoying hindrance in what could otherwise be a straightforward, tense chiller. In fact, it actually makes any attempts at simply 'telling a story' utterly worthless.

But here's what I have plot-wise: taking an immediate misstep out of her Martha Marcy May Marlene starting blocks, Elizabeth Olsen plays a young woman helping to renovate a house in the middle of nowhere with her dad and uncle. But then she hears creaky footsteps, sees eerie shadows and realises someone else is under the same roof as them, intent on terrorising all involved. And that's pretty much it. 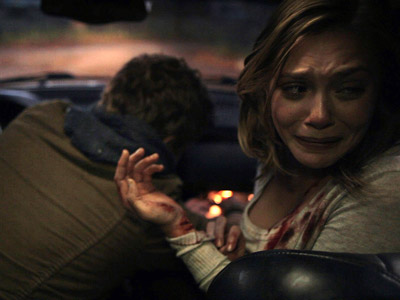 At one point they're in a car. But then they go back in the house. I don't know.


The problem is, thanks to the main cheap cinematic trick, we are only ever watching Olsen on screen at any time... all the time. The result is that 75% of the movie is made up of her tip-toeing around the house, scared out of her wits and breathing in that high-pitched hysterical fashion that's only ever really tolerable in a film because it's usually short-lived. And it all gets so irritating to watch that not only do you not care about the threat in the house, you just want the film to finish and be over with as soon as possible. It doesn't matter how high the stakes are when you feel physically affronted by how they are being presented.

Reason #1 why it's necessary to have edits and cuts in a film: If all you're doing is seeing an Olsen sister on screen, you have no idea how near or how far the danger is. At least Olsen herself gets to look around her, the lucky cow. All we get to see for the most part are her wide eyes and quivering bottom lip.

Reason #2 why it's necessary to have edits and cuts: spatial awareness. With one shaky cam following a single terrified person, there are no wider angles to help put her in context. As far as I'm concerned, the reason Olsen's dad and uncle are renovating the house in the first place is because it's made up entirely of door frames, hallways and under-the-bed space. 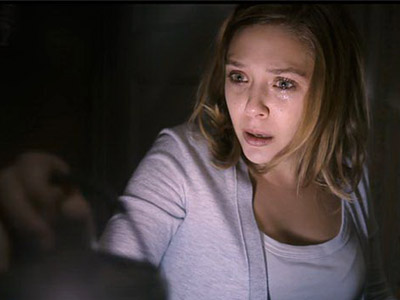 And she ends up finding a lamp anyway. POINTLESS.


The one redeeming feature here is that Elizabeth Olsen is actually really good in a completely unrewarding role. Having seen a thousand horror films with a total of ten thousand women shriek and gasp their way through a predatory attack, Olsen is one of the most believable at being utterly terrified. Her convincing portrayal of a near-paralysed-with-fear victim is a performance totally undeserving of an otherwise, cheap, gimmicky, flash-in-the-pan frightfest.

And, as it turns out, her impressive portrayal – and even an admittedly interesting overall conclusion – just isn't enough to rescue a film that is literally agonising to watch. Frankly, end credits should never be a source of so much relief.

More:  Silent House  Elizabeth Olsen  Chris Kentis  Laura Lau
Follow us on Twitter @The_Shiznit for more fun features, film reviews and occasional commentary on what the best type of crisps are.
We are using Patreon to cover our hosting fees. So please consider chucking a few digital pennies our way by clicking on this link. Thanks!