It irritates the hell out of me when people use obviously fake computers in movies. A black screen with green text like it's 1982. A free-typed database command like 'FIND ALL GUNSHOT VICTIMS IN SAN DIEGO'. An analogue beep as a search engine returns its results. So I am delighted to report that in horror movie Sinister, Ethan Hawke uses realistic search terms in Google. He talks to people on iChat. He uses real commands on dropdown menus, moves stuff to his recycle bin, and encodes video into .mov files. How scary is the film? Um ... it's ... did I mention how good the computer bits are?

In doing so it's important to make the distinction between frightening the audience and making them jump. The latter is not especially difficult: show a guy walking around a dark house in total silence for a while, then have someone jump out at him suddenly and cue up the score so there's a massive great string stab at the same time. Everyone will jump instinctively. But for the audience to actually be frightened, there'll need at least to be a feeling of unease or dread; the sense that the character is in some sort of peril. 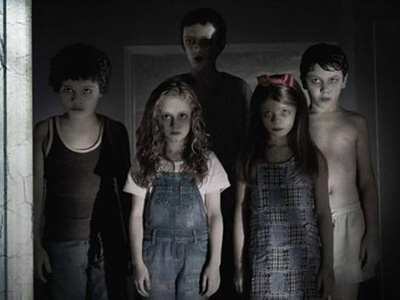 Bloody Jehovah's Witnesses. They'll try anything to make you take a Watchtower.

Ethan Hawke isn't really in any peril. He's a guy who voluntarily bought a house where he knows a family were murdered. He is, in short, a total mug. A true crime writer who hasn't managed to hit the heights of a previous bestseller again, he's moved his wife and two children to this house in order to research the murders and crack the true crime market again. If this book doesn't work out, his wife casually informs him, despite otherwise appearing perfectly happy in the relationship, she'll take the kids and leave. So MOTIVATION.

On arrival at his new home, he discovers a box of Super 8 films in the attic, the first of which shows the house's previous inhabitants being hanged from a tree in the garden. The rest of the films show other families being killed in similar ways. A mysterious, demonic figure appears in them all, watching silently. All of this is a perfectly good setup, and Hawke does a decent job of letting his creeping unease play out on his face, even if he does ask himself expository questions out loud a bit too much. (He's a writer, guys. You could just show him writing his thoughts down as notes and it'd make perfect sense.)

Soon enough, spooky things start happening around the house, as his research reveals disturbing new information about the murders. This, above all, is where it falls flat: you never feel as if the family's in any danger. Hawke spends long periods wandering around the house in the dark using his iPhone as a torch (another victory for realistic computer use) but he's never actually attacked by anything; he just sees a few creepy murals and dead-eyed ghost children making 'shush' motions at him. Where it's about to make you jump you know it a mile off because of the silence leading up to it, and sometimes the score even misses its beat entirely when the scary thing appears, deadening the impact.

Terrible cinema etiquette, this, but at least he doesn't have his phone on.

Sinister certainly deserves some praise for the spirit in which it's made. The use of found footage within a wider narrative, as opposed to comprising the film itself, is a clever technique that mirrors our own experience of horror films. (Hawke is basically doing what we do when we watch a scary movie on our own: getting a bit spooked and convincing himself he's not alone in the house.) The almost-total absence of blood will be refreshing for traditionalists too.

But it needs something to hang its hat on; something more than a guy walking round darkened corridors waiting to be jumped out at. In fairness, you could argue that it wouldn't be a horror film at all without its long silences before 'BOO!' moments, just as a Western isn't a Western without horses and hats. But it leans on its genre's conventions rather than building on them. And ultimately, when you're comfortable enough to notice with pleasure that the main character's syncing his iTunes realistically, what you're watching can't be all that sinister.

More:  Sinister  Ethan Hawke  Horror
Follow us on Twitter @The_Shiznit for more fun features, film reviews and occasional commentary on what the best type of crisps are.
We are using Patreon to cover our hosting fees. So please consider chucking a few digital pennies our way by clicking on this link. Thanks!