After the racing start that was Casino Royale, Quantum Of Solace felt like an unscheduled pitstop; Craig stuck in the driving seat, sitting frustrated and static while the Bond engineers frantically retooled his vehicle against the clock. I'm happy to report that Skyfall sees Bond well and truly back on track: a turbo-boosted return to form with all cylinders firing. It's not without its problems, but Skyfall walks that fine line between homage and evolution so confidently, it frequently breaks into a strut.


Right from the off, you're made aware of the talent on board: Daniel Craig appears as Bond with his trademark orchestral stab, lit by Roger Deakins and shot by Sam Mendes, slowly walking into focus until his face fills the screen and his gun slowly lifts. Compared to the chop-shop opening car chase of Quantum Of Solace, in which Marc Forster almost edited Bond to death, the opening scene of Skyfall feels like the return of an old friend. A frantic market chase follows, as Ola Rapace's henchman twists through an Istanbul market with a stolen hard drive, Bond and Naomie Harris' Eve in hot pursuit. It's an action scene tailor made with one eye on IMAX and a fitting opening: large in scale and bold in its choices, it's big, showy, clinically executed and has human interest at its thumping heart. 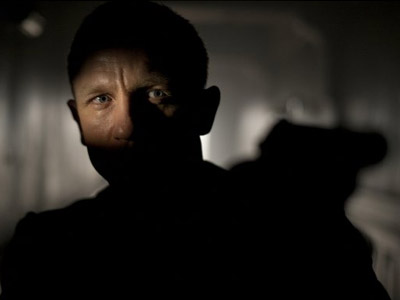 
The set-pieces in Skyfall do not lack the 'wow' factor, but this is a Bond film that's all about the characters living with the consequences of the choices they made – a proper, old-fashioned tale of betrayal, revenge and resurrection. As such, scenes like the explosive sequence on the London Underground and the final, Home Alone-esque showdown at Bond's Scottish family home do ring a little hollow, as they're essentially masking the important story running through them.

Judi Dench's M is the key, particularly her relationship with Bond and her ability to make the judgement calls that matter. Dench is just as big a part of Skyfall as Daniel Craig, but together they make for a dynamite pairing; Bond forced into the role of protector, M exploited and vulnerable. The rapport between the two is so rich, you feel as if there is 50 years of history between them right up on screen. "I read your obituary [of me]," says Bond, playfully. "Appalling." M replies, without meeting his glare: "I knew you'd hate it." It's a delight to see Bond spar with a woman who he doesn't get to shag immediately afterwards (thank God): Bérénice Marlohe's femme fatale Sévérine is a pale reminder of 007's usual line of gorgeous yet meaningless female companions.

When Mendes isn't afraid to let his actors do the work, Skyfall sails. When he relents and adds the necessary crowd-pleasers, the movie starts to seem a little over-familiar. At its lowest ebb, Skyfall finds Bond in a Shanghai pit-fight that recalls the worst of Roger Moore's reptile-based antics; thankfully, most of the pre-requisite franchise nods are low-key enough not to break the film's flow. Bond's meeting with his new quartermaster is a great example of how Skyfall looks to the past and the future: 007 stares agog at Ben Whishaw's prodigious Q ("You still have spots!"), while his basic care package of a coded gun and a simple radio elicits the response: "It's hardly Christmas, is it?" Q replies, incredulously: "What did you want, an exploding pen? We don't really do that any more." A nod and a wink, but not a back slap. 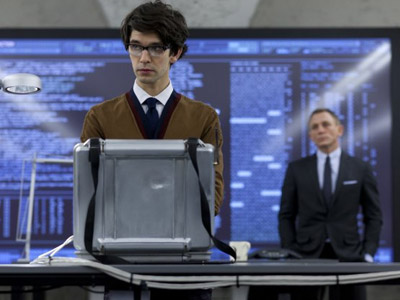 You can't argue with a man wearing a cardigan of that quality.


The biggest throwback to the Bonds of old, however, is Javier Bardem's baddie Silva. Believe me when I say this guy is going to provide some major meme ammunition on the internet in the coming weeks. A hacker with digital tendrils that creep beneath the world's major organisations, he is a terrifyingly modern threat, but one so camp, he immediately recalls the more caricatured villains of old. He minces. He flounces. He strokes Bond's leg. He calls M "Mommy". Every now and then, he emits an exasperated noise and throws Bond a mock-hurt gaze that is microns away from 'Ooh, duckie!' territory. But rather than distract from the serious business at hand, Bardem is absolutely thrilling to watch and lights up each scene like a firework. Fabulous in every sense, he's one tight white vest away from being an evil version of Hank Azaria's character from The Birdcage.

At two hours and 20 minutes, Skyfall feels a touch too long, and there are precious few surprises come the close, but Mendes does well to keep the energy high throughout – it's always building towards something, keeping that all-important momentum going. It's not quite the classic Bond you might have hoped it would be – it's too reverential to be truly original – but Skyfall is nevertheless a thrilling and vital new addition to the franchise. It really is a great year to be British, isn't it?

More:  Skyfall  James Bond  Daniel Craig  Judi Dench  Javier Bardem  Ralph Fiennes
Follow us on Twitter @The_Shiznit for more fun features, film reviews and occasional commentary on what the best type of crisps are.
We are using Patreon to cover our hosting fees. So please consider chucking a few digital pennies our way by clicking on this link. Thanks!