Emily Browning plays Lucy, an attractive college student who apparently funds her education by trawling bars for seedy older men and letting them do sex on her, as well as paid stints as a medical guinea pig, in which she allows a man to stuff tubing down her throat.

Lucy replies to an ad for a 'silver service' waitress and is drawn into a sinister yet alluring underworld in which she's offered the chance to sell her unconscious body to high-paying male clients. She takes a sedative, wakes up and – like it happened in a real version of Google Chrome's 'Incognito window' – she has no knowledge of the filth that transpired. Sadly, though it poses interesting questions about the nature of consent and the sale of one's soul, Sleeping Beauty has no intention of answering them. You sketch out the moral minefield, I'll start clumsily stomping my way through it. 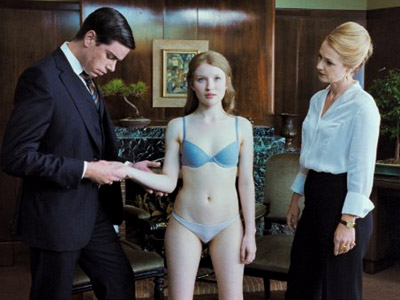 
Forgoing the obvious jokey parallels between this movie and Sucker Punch (which I only forgo because someone made them before me), Sleeping Beauty is certainly a gigantic step forward for Emily Browning, who gives a pretty darn fearless performance ('fearless' being writers' code for 'naked'). Played with a poker face throughout, Browning's detached character is fully aware of her actions, completely in control (apart from her beauty sleep) and thus, isn't particularly sympathetic. It makes her hard to warm to but she's certainly a fascinating case study, if not a completely recognisable human being.

Browning's a brave girl, but if only writer-director Julia Leigh was willing to give her a solid structure to work within. Sleeping Beauty has an ethereal, dreamlike quality to it, with story elements floating airily around the central premise, arriving unannounced and departing without so much as a lick of exposition (we're given no reason why Lucy is friends with one suicidal supporting character, for example, or why we should care).

Leigh favours extended, one-camera shots, which does lend certain scenes the required degree of discomfort, but this technique is applied liberally, meaning the movie quite often hits pause, allowing some old geezer to deliver a five-minute soliloquy on old age. Such rambling tends to detract from the film's moderately compelling plot, to the point where you suspect that Sleeping Beauty's artful composition and sparing dialogue is just window-dressing for 101 minutes of pretentious bollocks. 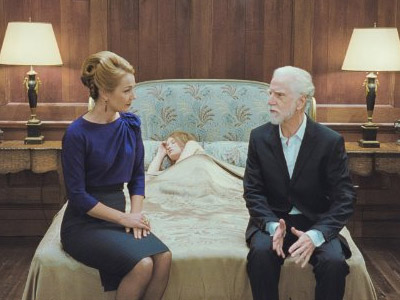 
Juggling moments of pitch black humour and disturbingly tense scenes of abuse, Sleeping Beauty has a queasy, mismatched tone that underscores an uneven, elliptical movie. I don't need everything spelled out for me, but some sense of conclusion come the movie's close would have been nice. Sleeping Beauty simply wakes up, and like us, has absolutely no idea what's been going on.

You suspect its point could have been proved much quicker by holding up a mirror to its audience and showing a room full of people watching a girl being fucked in her sleep. How challenging, they'd say.

More:  Sleeping Beauty  Emily Browning  Julia Leigh
Follow us on Twitter @The_Shiznit for more fun features, film reviews and occasional commentary on what the best type of crisps are.
We are using Patreon to cover our hosting fees. So please consider chucking a few digital pennies our way by clicking on this link. Thanks!