I've watched a few WWE 'shoot' documentaries recently. They feature men whom I spent hours of my childhood watching get greased up and pretend to ram their elbows into one another's kidneys, now older and with faces like meat, talking candidly about the roles they were playing. It's striking how different they all are from their in-ring characters: remarkably good actors, in a way. The move from ring to action movies is a natural one, and Dwayne 'The Rock' Johnson has always been the one most qualified to make it. But on the evidence of Snitch, he's forgotten one key piece of The Rock's credo: know your damn role.


Let's be clear, and not just because I don't want him to layeth the smacketh down on me: I think Dwayne Johnson's a pretty good actor. He has a sense of humour, he's self-aware, and he's perfectly capable of delivering a few lines convincingly. But he also looks like a wrestler, and so if you throw him into a story where he's just a father trying to do the best for his son, your audience is going to spend the whole film thinking: "He's going to throw that guy through a window any minute. Then probably give him the People's Elbow." But if he never actually does any of that, you've got to ask yourself the question: why did I want The Rock for this again? 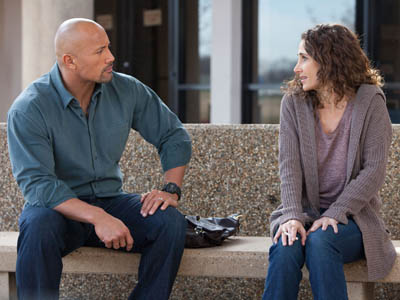 
It's an odd experience, waiting for a belly-to-belly suplex that never comes. When his son gets arrested for taking delivery of a package of drugs, Johnson convinces the local US Attorney (Susan Sarandon) and the Drug Enforcement Administration to let him bring down high-level dealers in exchange for reducing the kid's sentence. This would make sense if he had anything to offer them, but he doesn't, other than collaring his ex-con employee Jon Bernthal to introduce him to dealer Michael Kenneth Williams. The DEA could get the same introduction through a real informant, you'd imagine, so really all they're doing is exposing a civilian to a huge amount of risk. If they're happy with the plan, why not just send in a trained undercover guy to do the same thing?

As he progresses from dealing with mid-level pushers to cartels, the premise stretches your credulity like a well-hooked figure-four leg-lock, and you realise this isn't the action film you were sold: it's a thriller with one shoot-out and one car chase. But maybe there's no other way to market a film starring an ex-wrestler: you need a trailer that puts all the emphasis on the little action there is, and a poster that shows The Rock looking tough with a car crash behind him. (Oddly too, its claim to be "based on true events" later proves to mean it was inspired by a documentary about the legislation that allows reduced sentences for drug informants. You might just as well claim Thor was based on true events because New Mexico's a real place.) 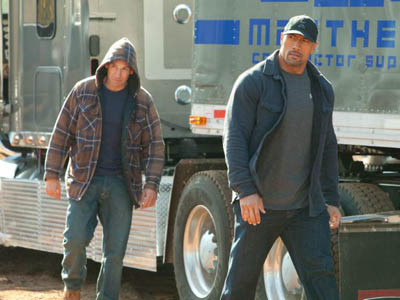 "The following contest is scheduled for ONE fall! Entering the ring at a combined weight..."


When you watch his tag-team partners you find more to enjoy. Sarandon and ZZ Top-bearded DEA agent Barry Pepper make the most of the shaky script, Williams wheels out his Omar again, and there's a stand-out performance from Bernthal as the character with the most to lose. But watching him try to tease more out of Johnson in the high-tension scenes just emphasises the mismatch in talent: like Bret 'The Hitman' Hart wrestling one of the Bushwhackers, you can only prop someone up so far.

There's still enough to drive it along and keep you interested: it's never boring or unfocused, and never loses its sense of direction. But the lead role calls for an average Joe. It's the opposite casting problem that Jack Reacher had: Tom Cruise needed to look physically imposing and didn't; Dwayne Johnson needs to look average and doesn't. If the two of them were a tag team, then some time around the beginning of last year would've been the time for one to reach over, tag his partner and switch places. Not literally, of course, that would be ... wait a second: The Rock and Tom Cruise as a WWE tag team? That'd be amazing.

More:  Snitch  The Rock  Dwayne Johnson  Barry Pepper  Jon Bernthal  Susan Sarandon  Michael Kenneth Williams
Follow us on Twitter @The_Shiznit for more fun features, film reviews and occasional commentary on what the best type of crisps are.
We are using Patreon to cover our hosting fees. So please consider chucking a few digital pennies our way by clicking on this link. Thanks!