Snow White And The Huntsman

What's this, you say? A film about Snow White? A movie in which Kristen Stewart has to choose between two dudes? A movie in which Charlize Theron behaves like a complete lunatic? A movie in which Chris Hemsworth is a swarthy yet heroic warrior? Please, continue! How delightfully original! There hasn't been a movie like this for years! Seriously! Shit you guys! My sarcasm button is stuck! It's making it sooo difficult to write this review with any modicum of professionalism! Ugh!


[Panic over, I jimmied it free.] I think it's fair to say that, with Mirror Mirror still in the rear view, Snow White And The Huntsman is not attempting to tread any new ground. No doubt green-lit off the billion-dollar take of Alice In Wonderland – actual Hollywood executive quote: "You mean we can just remake them queer fairy stories?" – this thuper therious take on the Brothers Grimm fairytale is a hotch-potch of fantasy fare new and old. There's a little Lord Of The Rings here (sweeping shots of people walking over mountain vistas); a little Narnia there (fantastical creatures frolicking and gamboling in the woods); a lot of stern-faced Game Of Thrones-style thesping (Sire this, my liege that). The one thing it lacks is an identity of its own: everything about it feels lifted from a superior product. 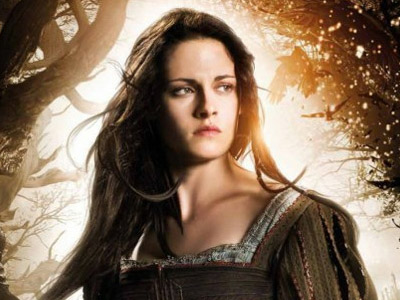 
Director Rupert Sanders – who made that awesome live-action Halo 3 advert a few years ago – certainly has an eye for a set-piece, and SWATH is certainly a visual treat: Charlize Theron's Queen Ravenna transforms into a swirling flocks of crows; an army made from black crystal shatter in battle; a dark forest throbs with nightmarish creatures, like a Pandoran jungle left to rot. But take Snow White And The Huntsman's striking beauty away, and you're left with a movie that's far from the fairest in all the land – it's totally ordinary, humourless and, truth be told, a bit of a drag.

In trying to be an edgy alternative to Tarsem's playful romp, SWATH has the very tricky task of fleshing out an unforgivably slight fable (Evil Queen wants to wipe out the new hotness) into an epic fantasy, complete with battle scenes and prophecies and ancient destinies being fulfilled (actual quote: "She is the one!"). Such theatrical grandstanding leaves no room for humour – it's telling that the seven dwarves were completely left out of all promotional materials, almost like the filmmakers were embarrassed of them. Aside from a few wisecracks from miniature Ray Winstone (funny only because they're delivered by a miniature Ray Winstone), the dwarves provide precious little levity – they all have depressing back-stories and grievances and for the love of God, SOMEONE FALL OVER OR PULL A STUPID FACE. 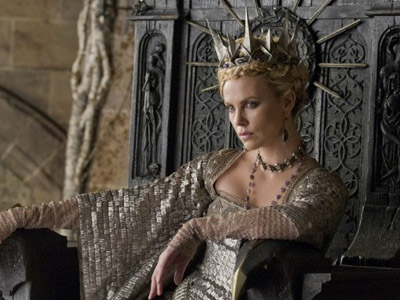 One is not amused.


Kristen Stewart, bless her, doesn't exactly help matters, engaged as she is in full-on lip-biting, confuddled mode. She's not quite as shit a female role model as Bella from Twilight, but she's hardly believable either and her transformation into battle hardened warrior-woman is about as convincing as Chris Hemsworth's Scottish accent (that is to say, not very). Thor just about acquits himself, despite some lumpen character motivations and a sob-story worthy of The X Factor, while Sam Claflin is officially the most irritating thing in tights since ladders. Thank God for Charlize Theron, who dials the crazy up to 'Warning: Panto!' As a result, she's the only one who looks like she's having any fun.

Without having seen Mirror Mirror, I can't claim it's any better than Snow White And The Huntsman, but it seems to me that fairytales are far better suited to children than they are to adults. Whereas Tarsem's tale was unashamedly enjoyable family fun, SWATH is so self-important and straight-faced, it clunks along like a spotty teen wearing oversized role-playing gear, desperate to be taken seriously.

More:  Snow White And The Huntsman  Kristen Stewart  Chris Hemsworth  Charlize Theron  Rupert Sanders
Follow us on Twitter @The_Shiznit for more fun features, film reviews and occasional commentary on what the best type of crisps are.
We are using Patreon to cover our hosting fees. So please consider chucking a few digital pennies our way by clicking on this link. Thanks!