As Moon sky-rocketed Bowie sprog Duncan Jones on to the exciting list of Talented New Filmmakers to Watch, it also automatically placed him on the sinister register entitled Don't Fuck Up the Next One. Now, while I'm going to try to keep this review relatively spoiler-free, I can reveal that, thankfully, he didn't. (*whispers*) It's really good.


With the promising tease of head-scratching time-travel and a mysterious mission, the outlook always looked good for this film…that is, until the posters were released, seemingly selling it as another of Hollywood's bad-science blockbusters - like a sequel to Nic Cage's Next. The truth, though, is that the film is actually a little bit of both, consisting of a cerebral concept with dark undertones that gives rise to fast-paced action and some neat explodey moments and special FX. In this instance, the combination works really well - the result being more like a thinking man's Speed as opposed to a what-were-you-thinking man's Déjà Vu. 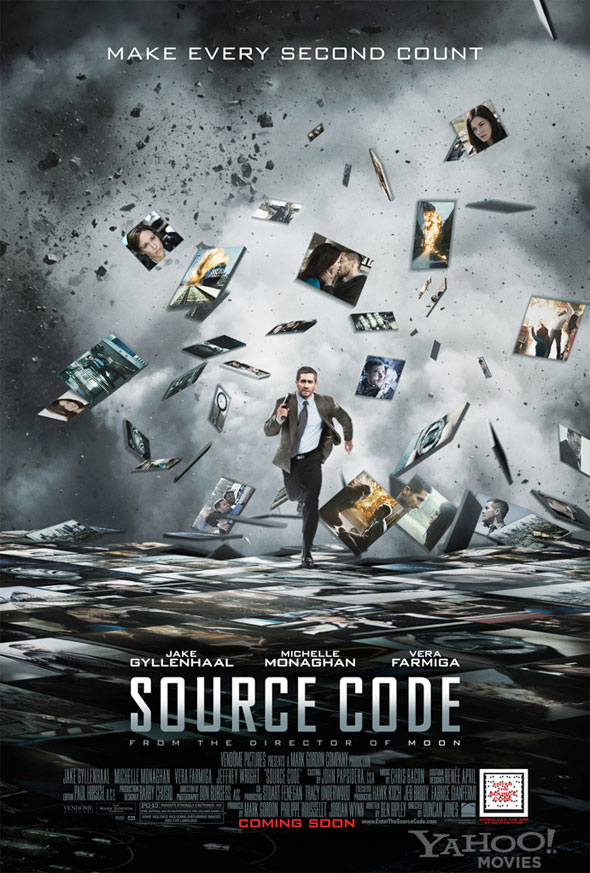 You're just going to have to trust me on this.


Basically, Gyllenhaal plays Captain Colter Stevens, who wakes up on a train apparently trapped in another man's body - that of history teacher Sean Fentress. As he desperately tries to make sense of who he is, why he has an unfamiliar reflection and whether or not he can get anywhere with Sean's attractive train buddy Christina (Monaghan), a train passes by on another track and an explosion rips through the carriage, killing everyone aboard both trains. Then Colter reawakens in a chamber, strapped into a pilot's seat, and is told by mission controller Carol Goodwin (Farmiga) via video feed that he must go back and relive the same 8 minutes on the train until he has discovered the bomber's identity.

It's an intriguing premise, which leads to a dual plot: who is the bomber, and what is happening to Colter? Rightfully so, the enticing latter takes precedence over the whodunit former, with all focus on Colter's baffling mission, even as he continues to follow orders and find new ways to narrow down his list of suspects. Thankfully too, Colter is a dynamic military man who gets over his disorientation quickly (helped by the fact that, at first, he thinks the whole scenario is all just a highly-developed simulation test), which saves us from any tedious “I've already lived through this once - how can it be happening again” moments.

The film's biggest strength though is in the steady trickling of new information that arises about the nature of his mission, as Goodwin gradually gives up more and more information about Colter's ‘real-life' circumstances and what has prompted this assignment. This makes for a brilliantly unpredictable plot: there are no gimmicky twists here - just the gradual reveal of our hero's unknown background and, as each divulgence sheds new light on his very unique predicament, Colter remains an intelligent and resourceful protagonist who adapts to the situation and even, at times, outsmarts his supervisors. 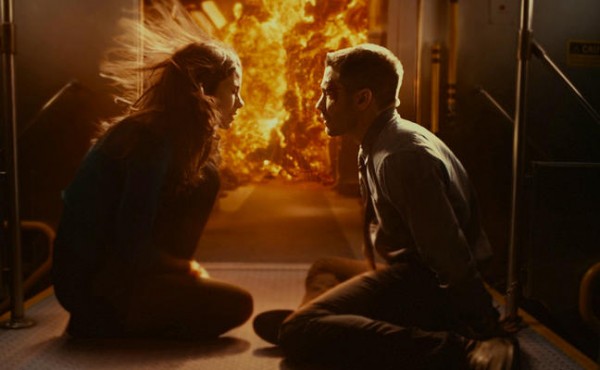 Dammit! If only it was frost instead of flames - frost, I can outrun.


Unfortunately, more predictable is the handling of the pseudo-science behind this ‘time-travel', which isn't really time travel at all but the re-experiencing of Sean Fentress' memory 8 minutes before he died. It's all typical bobbins, but the explanation is delivered with such po-faced condescension by Goodwin's unfeeling boss (played by Jeffrey Wright), it might as well have come out of the mouth of The Matrix's Architect. What is told so matter-of-factly as simple but breakthrough science, I heard as “Well, basically, right (*cough*) physics-quantum-memory-brain-cortex-quantum-synapse (*cough*), y'see?”. There is, however, an argument for keeping all of this stuff vague, as the underestimation of the whole scientific procedure becomes a main theme within the film.

And, besides, that's a small niggle in an otherwise hugely enjoyable film, which manages to be both entertaining and thought-provoking. While, at first glance, this glossy stylised sci-fi seems a far cry from Moon, there are certainly some parallels to be found - both in the grim exploration of losing one's identity and in the intensely claustrophobic feel of Colter's chamber scenes. Surprisingly though, Source Code is ultimately more uplifting, with a final scene that contains a beautiful visual metaphor and, while leaving some unanswered questions, doesn't dissatisfy or infuriate like, for example, the ending to Inception. If anything, the film is just exactly the result you'd expect from the director of Moon dipping his toes in Hollywood.

More:  Source Code  Jake Gyllenhaal  Duncan Jones
Follow us on Twitter @The_Shiznit for more fun features, film reviews and occasional commentary on what the best type of crisps are.
We are using Patreon to cover our hosting fees. So please consider chucking a few digital pennies our way by clicking on this link. Thanks!