Some actors go their whole lives without being offered a role as tasty as James McAvoy's character in Split. You've heard of roles being described as "scenery chewing"? In Split, M Night Shyamalan basically builds his sets out of beef jerky and invites McAvoy to tuck in. It's full-on Willy Wonka. As kidnapper Kevin who suffers from dissociative identity disorder (multiple personalities to you, me and I), McAvoy effectively has free reign of a buffet comprised of equal parts cheese, ham and bananas.


Split is a movie that puts Shyamalan back on the road to redemption following so many years of self-indulgent twatting around; not only is it a taut little thriller that's fully aware of exactly how ridiculous it is, it's a brazen attempt at kickstarting a new horror franchise, complete with an iconic new killer who has already written his own sequel. But before we delve into the brain of Kevin, a disclaimer boxout:

With that caveat out of the way, please let me tell you how shamefully entertaining this movie is. McAvoy has 23 personalities inside him fighting to get out (idea for fan-fiction writers: maybe some of them want to have sex with Michael Fassbender?) but we get to see only eight, each one "hyper-focused" on one specific personality trait - it's a medical condition known as "two-dimensional character syndrome". There's Dennis, the OCD-suffering bouncer to the nightclub that is Kevin's brain; there's Patricia, a motherly figure with a wide-on for paprika; there's nine-year-old Hedwig who enjoys the music of Kanye West; and there's camp fashion student Barry, the 'sane' one who checks in with his psychiatrist (Betty Buckley) to keep all of his ducks in a row. McAvoy is essentially an ensemble cast all by himself. 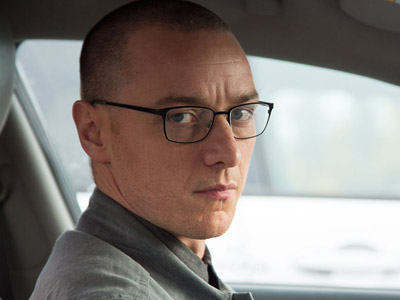 
Strip Split down to its bare essentials and on paper it sounds very ordinary: psycho kidnaps girls; they try to escape. On film, it is a very different beast. McAvoy's multiple performances give Split a dimension that so many modern horror movies lack: an air of unpredictability. There's no twist to speak of - unless you count the bonkers last 30 seconds of the film, which honestly made me yell "What the fuck?" at the screen - but instead you remain enthralled by McAvoy's unravelling, all of which is internalised. There's a bit of standard genre schlock to wade through in the final third and a quite grim and not entirely necessary abuse sub-plot to tolerate, but otherwise Split is lean and mean and keeps you guessing.

Bravo to M Night Shyamalan, then, who has managed to deliver a fiercely effective, ferociously funny and genuinely gory horror movie, all without relying on a last act rug-pull. Hope that James McAvoy can free up his schedule to fit in a follow-up - suggested title: Split 2: We Need To Talk About Kevins - and retain his hunger, because if the last scene hints at what I think it does then we're looking at a sequel pitch that really makes the mind boggle.

More:  Split  M Night Shyamalan  James McAvoy  Anya Taylor-Joy
Follow us on Twitter @The_Shiznit for more fun features, film reviews and occasional commentary on what the best type of crisps are.
We are using Patreon to cover our hosting fees. So please consider chucking a few digital pennies our way by clicking on this link. Thanks!