Spooks The TV Show was always a cut above regular television. Each of its 10 series was densely plotted with subterfuge, moral dilemmas and shock deaths, but even if you immediately lost track of the complicated details within, you could still enjoy the tension, twists and conspiracies at a surface level. But how does that all translate to the big screen for Spooks The Movie? Do we have a Hollywoodised version with airborne car chases and a Jay-Z soundtrack? Nah. All that we have here is really just more of the same. The question is: is that necessarily a bad thing?


It's easy to imagine that the biggest criticism this film will receive is the classic "well, it just felt like one really long episode of the TV show" and it's hard to argue that this doesn't make the film unremarkable in some ways.

Yes, things are a bit glossier this time round, and we now have a sexy Game Of Thrones star doing all the fast running, gun pointing and into-his-earpiece-talking, but the fact is that the TV series always dealt with large-scale threats and wide-reaching consequences in the first place. So, short of having a robot army or a volcano lair, there wasn't much further that Spooks could explore without feeling like a different property entirely. 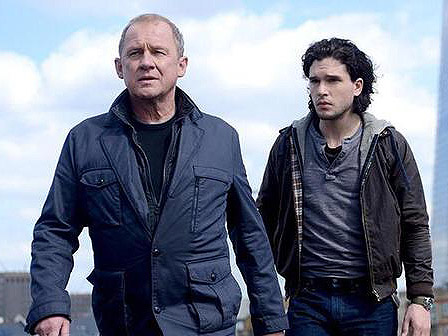 "Is that a giant alien spider in the distance?"


What previous Spooks head writers Jonathan Brackley and Sam Vincent do manage with this script however is to make the peril personal as well as global.

With a botched terrorist handover operation leaving show stalwart MI5 director Harry Pearce under suspicion of treason and in hiding, he contacts formerly sacked agent Will Holloway to help him find the real traitor from within the agency. Holloway, meanwhile, has a personal grudge against Pearce that doesn't allow for much trust, and he is also brought in by government-level top-bods to help capture his former boss. As has always been the case with Spooks, divided loyalties, mistrust, suspicion and major conspiracies all play a big part in proceedings, but all to great effect. The film's paranoid overtones are such that, at one point, I was left wondering if the person sat next to me was really just another fidgeting film reviewer or some kind of double agent rustling around for a silencer and some exploding cufflinks.

After historical (misst)epic Pompeii and horribly clean-shaven credibility grab Testament Of Youth, Kit Harrington finally looks to have found a comfortable movie type to pursue in his career because his intense, quick-on-his-feet Holloway injects this usually politically-bent property with fresh, action-packed, young blood. Meanwhile Peter Firth is clearly comfortable in familiar shoes but this time, without a series-long story arc to get through, we just have the joy of seeing Harry Pearce stay one step ahead of everyone else at every stage by employing old-school evasion tactics. All because he is just so damned experienced at all this spy malarkey. 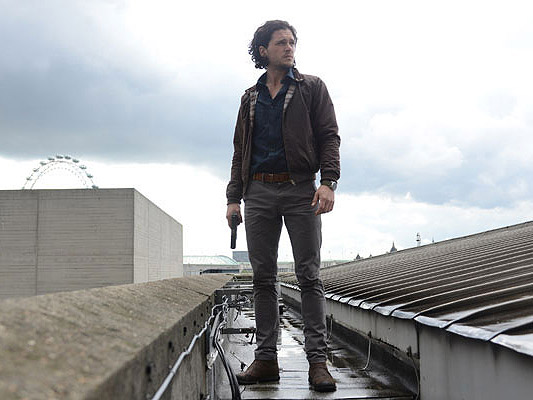 
There are issues of course, and as with the positive points a lot of them stem from Spooks' small screen roots. For example, it still seems remarkable to me that the whole of MI5 - Britain's top department for super-secret national affairs - is apparently run out of a small office by a team consisting of about 6 people in total. And, every so often, the awesome tech that we’re used to seeing in cinema means that the back-to-basics approach here feels a little too lo-fi. After all there’s only so many times you can see brown envelopes getting surreptitiously shoved under doors before you start to wonder why spies haven’t developed a more sophisticated form of covert communication.

On the whole though, the film performs a great balancing act, paying service to long-time fans with character cameos, but largely ignoring its own history to concentrate on a plot that simultaneously thickens and unravels at breakneck speed. As a result, this tense, taut and intelligently plotted British thriller makes more generic instalments in the genre - like Jack Ryan: Shadow Recruit - seem like a dumb jock movie by comparison. God, remember Chris Pine as Jack Ryan? Nope. Me neither.

More:  Spooks The Greater Good  Spooks  Bharut Nalluri  Kit Harington  Peter Firth
Follow us on Twitter @The_Shiznit for more fun features, film reviews and occasional commentary on what the best type of crisps are.
We are using Patreon to cover our hosting fees. So please consider chucking a few digital pennies our way by clicking on this link. Thanks!