Harmony Korine isn't like other filmmakers, and his films aren't like other films. Anyone who saw Trash Humpers will have noticed that it was difficult to compare to anything else in its genre, because the genre of movies about people wearing grotesque masks and having sex with bins contains precisely one film: Trash Humpers. This is obviously a good thing: cinema needs mavericks like Korine to come along once in a while and kick the medium up the bum. To some extent it doesn't even matter whether or not his films are any good. He's an artist, and his films are statements.


At its heart, Spring Breakers is no different, but it might - just might - be his most successful film yet, and that's not without irony. The casting of former squeaky-clean child stars Vanessa Hudgens, Selena Gomez and Ashley Benson (alongside Korine's own wife, Rachel) as cock-happy, gun-toting bad girls will draw in their legions of fans, only to hit them with a veiled but uncomfortable truth. Whether that truth is the message they take away remains to be seen, because what a thirty-something-year-old bloke like me sees in Spring Breakers is unlikely to be the same thing a twenty-year-old High School Musical fan sees.

On the surface, Spring Breakers is lightweight nonsense about four college girls so desperate to have an AWESOME ASS-KICKIN' SPRING BREAK Y'ALL that they rob a diner to fund their trip to Florida where they discover the meaning of hedonism, by which I do not mean that they look it up in a dictionary. Their exploits land them in jail, and they're bailed out by Alien, a rapper who deals guns and drugs and who owns an impressive collection of shorts (in every fuckin' colour). What could possibly go wrong? 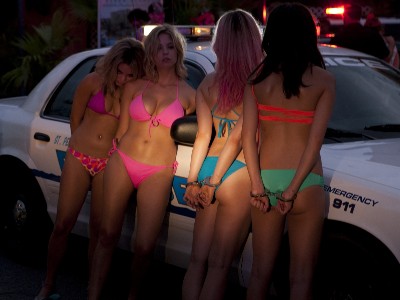 Depends whether you call this "wrong".


From the off, there's an almost unbearable sense that things could turn ugly for the girls at any given moment. They're not selfish, but they think of nobody other than themselves, and it's obvious that they can't carry on that way without coming a cropper. The ugliness arrives in the shape of Alien (James Franco with a full set of silver teeth and white-boy cornrows), but when things get really nasty it's not a single, shocking event but a natural progression in the girls' story. Their path is laid out for them, and it's their choice whether to follow it or not. If this is Korine's comment on modern American youth, it's pretty damning: have as much fun as you like, but a youth spent in the shallow pursuit of celebrity, money and the American dream will only lead to a nightmare. Korine even suggests, in one of the film's least subtle metaphors, that faith might be the only thing keeping you from harm. Lose faith, and you lose yourself.

Allegory aside, Spring Breakers is a guilty pleasure, mainly thanks to Franco's bonkers performance as a Tony Montana wannabe. "Look at all my shit!" is the new "Say hello to my leel fren!", and Franco utterly convinces as an appalling human being who's a Venus Fly Trap to impressionable young girls. Alien is everything wrong with society, but he's sexy and he knows it. The girls are less successful, bland ciphers of aimless youth (Hudgens and Benson are virtually indistinguishable from each other), but that feels like a deliberate move on Korine's part. 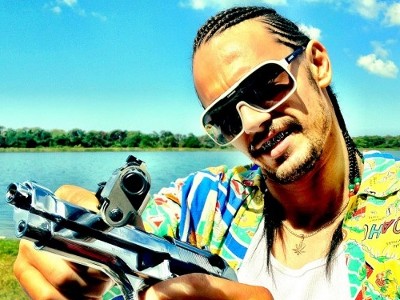 
Constructed in a dreamlike fashion, with dialogue and shots from future scenes spliced into present ones, Spring Breakers is likely to divide audiences with its woozy tone. You're free to read it as a non-stop party or as something much deeper, but either way there isn't an awful lot here to entertain beyond Franco's crackers turn. One thing's for sure though: a British version, called Easter Holidayers, about students eating overpriced chocolate and watching Bond films on the telly, would probably not be quite such an appealing prospect.

More:  Spring Breakers  Harmony Korine  James Franco  Selena Gomez  Vanessa Hudgens  Ashley Benson  Rachel Korine
Follow us on Twitter @The_Shiznit for more fun features, film reviews and occasional commentary on what the best type of crisps are.
We are using Patreon to cover our hosting fees. So please consider chucking a few digital pennies our way by clicking on this link. Thanks!