Right from the very first scene, which sees Kirk and Bones sprinting through bright red flora to escape from a primitive alien tribe, Star Trek Into Darkness proves to be a film of relentless adventure. It’s non-stop action through and through, and, once this opening chase sets the pace, the film seems to always be constantly accelerating. As such, the film spends all of its time going somewhere; and it goes quickly, it goes loudly and it goes spectacularly. The only problem is that it never seems to live up to the franchise’s original mission statement and go boldly.


The biggest triumph of J.J. Abrams’ previous stab at Starfleet was in using its own rules and logic to wipe the slate clean. It was a daring move; creating a new timeline that effectively reset the Trek universe and told fans that everything they knew about the original crew no longer existed. But it paid off - the Enterprise could now embark upon its voyage completely anew in what turned out to be the perfect preboot. So what comes as the biggest disappointment in this follow-up is seeing the crew retread so much old ground.

It’s an understandable predicament. With the second film in the original movie series being The Wrath Of Khan, arguably the best and most revered Trek adventure to date, this new second film has a lot to live up to. But, rather than seek out new life and new civilisations, it spends too long paying service to devoted Trekkies with homages, in-jokes and nods, while – most criminally of all – using a previous story as the template for a huge chunk of the plot. 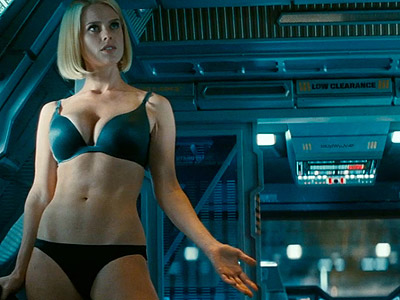 But it's ok because THIS TIME IT'S IN ITS UNDERWEAR.


But while it may be a wasted opportunity to deliver something new and exciting, there’s still much to admire here, particularly if you are already enrolled into Starfleet fandom. Abrams manages to maintain the same sense of light-hearted fun that held together his previous effort. The Kirk/Spock relationship is explored even deeper than before but the film still finds plenty of time to giggle at Bones’ love of metaphors, Uhura’s Vulcan romance and Scotty’s general mugging tomfoolery. Meanwhile cameos from familiar alien faces continue to fill the screen, whether as a quick flag for audience members in the know or to help get all the chess pieces in place for when we were first introduced to Star Trek in 1966.

The persistent action sequences also offer predictably stunning entertainment. With Chris Pine’s Kirk once again showcasing a resourcefulness that borders on recklessness, there are occasional moments in the film that seem to capture the old school adventures of one Indiana Jones, complete with silly gags highlighting the Captain’s unfortunate impulsiveness. Unfortunately, with all of these perilous scenes strung together for the whole film’s duration, the pacing feels off, with no particular set-piece offering a stand-out moment. Not to mention that several of these sequences feel stolen from other action/sci-fi blockbusters, including Kirk’s horizontal launch through space apparently lifted directly from the exact same vertical launch he undertook in this film’s predecessor. Fair enough, this fact is lampshaded in the preceding dialogue but it still smacks of lazy writing. 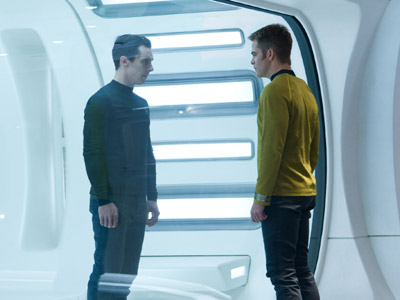 Script note: "And then they talk for a bit".


The pacing is also an issue because we don’t get to enjoy many quality character moments between our heroes and Benedict Cumberbatch’s stoney-faced villain John Harrison. With emphasis placed on the spectacle of starship space battles and wanton destruction instead, we lose out on really getting to know our antagonist and fully understanding his motives. Cumberbatch himself puts in a decent enough performance, dramatising his lines by stretching his jaw with every syllable, but ultimately his baddie is uncharismatic and, as a result, rather unmemorable. A few occasions where his stern perfectionist persona is offset by Kirk’s own by-the-seat-of-his-pants approach makes for the occasional laugh, but much more could have been made of this contrast if Abrams just spent a little more time with him as a character rather than a fighting foe.

Overall, the film has plenty of triumphant moments which mostly pander to the religious fans, particularly when the Enterprise and warp speed are explored in ways that haven’t been seen before. But, come the film’s end, a lot of this Trekkie brown-nosing seems to have been added to help hide the many, many plot holes. It seems a common trait with recent blockbusters, but the film will have you pondering so many illogical moments and bizarre story flaws, that you’ll want to run a level three diagnostic on the script’s logic array. 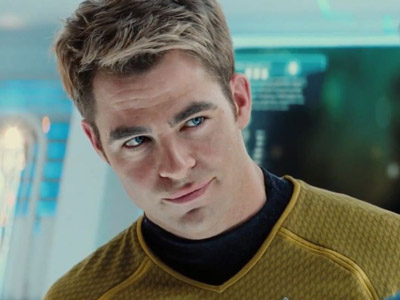 Hey girl, did you like my Star Trek reference?.


And, most importantly, once the fan-cheering has died down, you’ll wonder whether you really enjoyed the film or just enjoyed being one of those in the know, getting every joke and reference along the way. After all, is that really the point of this brand new, reborn franchise? In the great Star Trek vs Star Wars argument – a debate newly ignited now that Abrams has been assigned to both – the best weapon that Trek has up its sleeve is the freedom to tell whatever story it pleases, with an entire universe of science fiction elements at its disposal: time travel, parallel universes and any kind of technology the writers can imagine. So why waste this potential to simply run an existing story through the replicator?

In this age of prequels, sequels, reboots and remakes, there has never been a better argument for this film, with all of its sci-fi tools, to be brave and impress with an entirely original adventure for the crew. Instead, however, it has ended up as a fun but lazy addition to the series – somehow managing to be a prequel, sequel, reboot AND remake all in one. And while many fans will be distracted and delighted by the flash-bang of photon torpedoes and nostalgia kicks to announce their faith in Abrams to handle Star Wars VII with due reverence, they will be missing the point. Due reverence is what we have here and, on this basis, we can expect Abrams to deliver a new Episode filled with Jawa cameos and Force-fed fun rather than what we should get: an entirely new hope.

More:  Star Trek Into Darkness  Star Trek  JJ Abrams  Chris Pine  Zachary Quinto  Benedict Cumberbatch
Follow us on Twitter @The_Shiznit for more fun features, film reviews and occasional commentary on what the best type of crisps are.
We are using Patreon to cover our hosting fees. So please consider chucking a few digital pennies our way by clicking on this link. Thanks!