One of the most reviled films in cinema history comes to a format that is little more than a cynical cash-grab, all from a man who raped our childhoods. But fuck it, it's still Star Wars, right guys? Guys?


So Star Wars: Episode I - The Phantom Menace then, a.k.a. I Have A Bad Feeling About This, a.k.a. I Thought It Smelled Bad In 2D. Before you balk at the three shiny stars above, bear in mind two things: 1. There is literally no point in rating this film - you've all seen it, you've read countless reviews, features and comments explaining why it's terrible and you probably have a dozen anti-Lucas pics and gifs stored for special occasions. 2. I have a blind, unwavering, irrational love for the Wars that defies even your collective hatred. Three stars is the best compromise I can reach, I'm afraid.

Moving on then, how does Phantom Menace fare with this new 3D release? Well, whatever baggage you have with the film, emotional or Internet-informed, the new additional dimension really doesn't add any new dimension to the film. The plot is still non-existent, the acting is still wooden and the dialogue is still riddled with dull nonsense about taxes and trading.

But you'd be forgiven at the start of the film for thinking it’s all just hyped backlash and that maybe, just maybe, Phantom Menace isn't quite as bad as you remember. It certainly appears that way as the film starts: if there was ever a use for post-conversion 3D, it's for seeing the opening text crawl disappearing into the background the way it was always meant to be seen. That coupled with the still-goosepimpling theme might make you think that you're in for a fresh and exciting experience. By the time Liam Neeson and Ewan McGregor brandish swirling lightsabers like muthafuckin' PROFESSIONAL Jedi (none of this farmboy shit), you might even have a joyous flashback to when you first saw the film and had no idea what was to come.

But then it happens. Now in 3D. 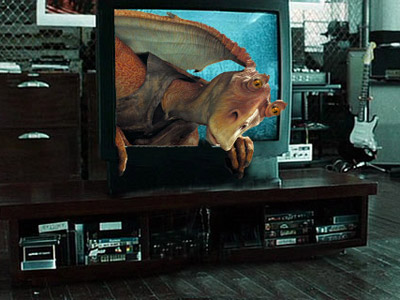 Jar Jar doesn't just show up in the middle of your favourite franchise and shit all over it. He doesn't even just pratfall an entire saga of magic and wonder into a steaming pile of shattered hopes and sorry excuses. No, the stupefying rastafrog basically takes everything you ever loved and cared for in the world and reduces it to a crying, pitiful wreck of slapstick-tongued fuckery. And no matter how much you want him to get crushed, grinded into tiny pieces and blasted into oblivion, he JUST. KEEPS. TALKING.

Of course, the problems in Menace run far deeper than a cunty Gungan - and are even worse than the demystifying midi-chlorians. The main problem here is that, essentially, we have a Star Wars movie in which nothing really happens. In New Hope, Luke rescues a princess and helps a rebellion army. In Empire, the rebels escape an ambush and end up trying to rescue each other. In Jedi, they launch a final attack on the Emperor and Luke confronts the baddest ass in the galaxy. In Menace, their ship breaks down. Oh, and they go looking for parts. Yes, they meet little Lord Vader, have fun with some Galactic F1 racing and just about fight an evil Sith Lord, but the majority of the film is made up of trade federation talk, Jar Jar japes and transitional shots of spaceships taking off and landing.

Even a comparison of the text crawls reveals the really dumb can't-believe-they-did-this fundamental flaws of the film. In the original (holy) trilogy, we get talk of attacks, secret plans and ultimate weapons. For Menace, we get “trade routes”, “endless debates” and “shipping”. 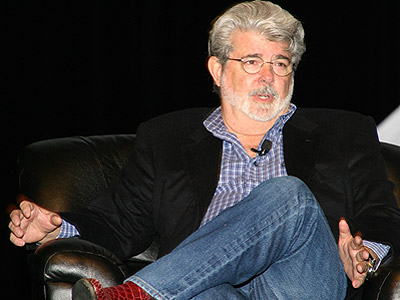 ”What do you mean it’s not fun? It’s the GALACTIC Senate of the Republic!”

That said, there is still much here to be admired – for the idea at least, if not for the execution. Whether it was dreamt up before 1977 or just when Lucas decided he needed more plaid shirts and beard trimmers, the fall of a republic and the rise of an evil emperor is a long, complicated tale to tell and this is a magnificently designed insight into a universe before it fell to ruin. In many ways, the shiny spaceships and showy CGI do the prequels a service - the new trilogy looks and feels flashier than the old trilogy because it's supposed to.

And there is, of course, Darth Maul, the anti-Jar Jar and our first look at what an evil ninja Sith might look like. What he lacks in Vader’s power, he makes up for by being such an intimidating visual threat and, although he is used far too sparingly in the movie, every scene he’s in is so effortlessly cool, it’s enough to make you squeak “yippee!”. Then there’s the lightsaber duel, which is easily one of the best sequences in the whole saga. Everything from Obi-Wan’s feint to Qui-Gon’s brief meditation, it is all pitched perfectly, along with the three other simultaneous battles, to make for a tense but energetic finale. And it was our first glimpse into how Jedi and Sith fought each other when they weren’t old men, half-robots or related to each other. 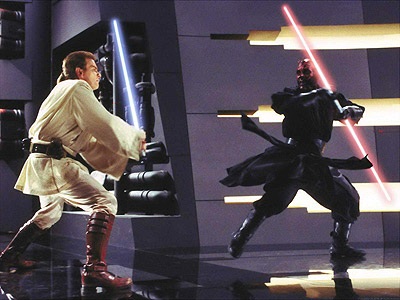 Which just brings us to the only aspect worth talking about in this review (‘cos, really, you know the rest). Is the 3D worth it? Does it look terrible? Does it just look the same as it always did? Yes to all of the above. For the most part, the 3D is non-existent: the post conversion works best when there are clearly defined lines on screen so ships in space and views from within a cockpit all look great. But most of the film takes place on Tattooine and Naboo and there is little added depth just when the film needs it most.

But the 3D gives as much as it takes away. While the starfighters leading an assault on the droid federation ship looks more spectacular than it did before, the climactic lightsaber duel suffers from a severe blur, presumably because it is less well-defined and more fast-paced. And the pod-race? Meh.

So all you are left with, in essence, is Star Wars Episode I: The Phantom Menace, and nothing here is going to change your already fully-formed opinion about that film. Go and see this 3D re-release if, like me, you are happy to just be watching a Star Wars film – any Star Wars film – on the big screen again. Otherwise, trust your instincts and be mindful. Or some such shit.

Personally, I already can’t wait for the shoddy 3D re-release of Attack Of The Clones.

More:  Star Wars Episode I The Phantom Menace 3D  Star Wars  George Lucas  3D
Follow us on Twitter @The_Shiznit for more fun features, film reviews and occasional commentary on what the best type of crisps are.
We are using Patreon to cover our hosting fees. So please consider chucking a few digital pennies our way by clicking on this link. Thanks!