For a guy with little interest in 'street performance art' or whatever the hell it's called, it's astonishing that I've seen all three Step Up movies, StreetDance 2 and the original Footloose. It also means that I'm probably the site's most qualified writer to tackle this dance-friendly fourquel. I have no idea how this has happened. I CAN'T EVEN DANCE!

So as I'm the apparent expert on the subject now, I can tell you with complete confidence that Step Up 4: Miami Heat barely deviates from your usual tried and tested predictable dance movie. There are some fancy new moves on show and a few more sun-soaked bodies, bikinis and jiggling body parts than before, but at the core it's still the same old tired routine.

In Miami with her property developer father, rich girl Emily (Katherine McCormick) aspires to become a professional dancer. Instead she's seduced by the infamous dance crew 'The Mob' - guerrilla specialists in large scale elaborate flash mob routines. And as these films typically go, she succumbs to the oily abs, backwards cap and designer stubble of The Mob's leader, Sean (Ryan Guzman). After The Mob's neighbourhood (all one bar and a warehouse of it) is threatened by Emily's dad's development project, they turn their 'performance art' into 'protest art' while gaining a huge following on YouTube. 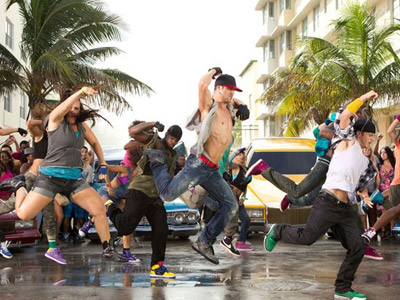 Traffic news, and roads continue to be blocked by badly-dressed, dancing chodes.


It treads an overly familiar path, but what saves this LAST DANCE from one-star obscurity is the boldness to break with the 'versus' tradition of every other street dance movie ever made. The introduction of the flash mob freshens everything up and adds a new dynamic to a genre that was well past its best, whenever the hell that was. The dance routines, as expected, are impressive - brilliantly choreographed and complimented nicely by the 3D. Not once do they feel repetitive or forced, but they actually take the story forward (take note StreetDance 2).

The Mob, meanwhile, organise their routines with as much precision, intricate detail and fine planning as a bank job. If anything, it's just nice to see a dance movie that doesn't centre on multiple crews having dance-offs in dusty old warehouses, taunting each other about a lack of 'game'.

But, like all dance movies before it, Miami Heat suffers at the hands of a cast filled with disareegable, one-dimensional personalities with nothing going for them but an ability to spin on their head. I said in my review for Step Up 3D that that's to be expected from a cast made up of professional dancers, but fourth time around, it really grates. The Mob's leader Sean is almost identical to Channing Tatum's character in the very first Step Up: with a brief back story about the hard life he's had on the 'wrong side of the tracks', he decided to dance 'to be heard'. 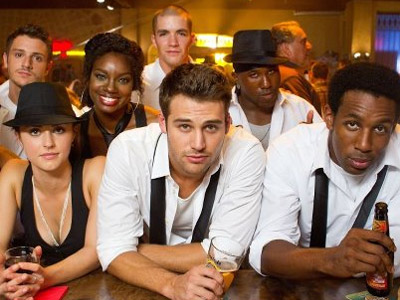 Ruining a bar near you soon.


Emily, the female lead is no better. Yeah, she's bendy and nice to look at but we're made to feel sorry for her because her father (played by real actor Peter Gallagher) is a multi-millionaire hotel mogul, she's never had a real home and has always moved from luxury hotel to luxury hotel. Boo bloody hoo. The rest of The Mob, introduced in an Ocean's Eleven-esque way to make them look more exciting, are made up of equally lifeless characters, each with their own equally dull trait. By the end, you're hoping they get arrested for disturbing the peace and trespassing.

Any sign of a decent story fizzles out like a drunken relative dancing at a wedding. The potentially interesting subplots of a YouTube competition and Emily's desperation to make it at a dance company come to zilch. It's good the writers have at least tried to create something of a story but it'd be nice if they saw it through.

We can criticise all we like but these films are critic-proof. The acting is sloppy and a strong plot is not needed. As long as there's a dedicated fanbase of dance-loving teenage girls dreaming of winning Britain's Got Talent, then Step Up movies are going to continue being made. And I'll no doubt continue to be on hand to review them. Gah.

More:  Step Up  Dance Movies  Step Up 4  Step Up 4 Miami Heat  Scott Speer  Katherine McCormick  Ryan Guzman
Follow us on Twitter @The_Shiznit for more fun features, film reviews and occasional commentary on what the best type of crisps are.
We are using Patreon to cover our hosting fees. So please consider chucking a few digital pennies our way by clicking on this link. Thanks!