Was Steve Jobs a genius? Was he a revolutionary? Did he change the world? Or was he just an egotistical asshole? Danny Boyle's Jobs iOpic, powered by word processor Aaron Sorkin, doesn't so much pick a side as it does tick all the boxes. Michael Fassbender's Apple guru is at once exhilaratingly wise and exhaustingly obstinate; a complex man with fearsome drive but fundamental flaws; a man who doesn't deserve a glowing biopic or a Hollywood hatchet job. Boyle's portrait of the Cupertino legend is a fizzing, lively affair that certainly has you convinced of one man's genius, although we're guessing that man wasn't supposed to be Aaron Sorkin.


We're in Social Network territory here - awfully close to the recent past in tech terms and lacking the distance to truly discern what constitutes a game-change in cultural thinking. Here, Jobs is forever boasting of changing the world, of "making a dent in the universe"; the braggadocio of an egotist, certainly, but is it earned? If you're asking me - and hey, even if you're not, I'm asking me, because it's my review - then until the advent of the iPod and later the iPhone, an event not covered by Sorkin's three-act screenplay, Apple and Steve Jobs succeed only in making personal computing twice as expensive and ten times as pretentious.

To its credit, Sorkin's screenplay addresses your - okay, my - criticisms about Apple's business model; not in a "We're going to purposely change the chargers after a few years and intentionally make the battery life shit" type of way, but in a way that transposes Jobs' personal flaws onto his professional endeavours. It's a metaphor that's a little too on the nose, but Steve's insistence on his Macintosh having "end to end control" speaks volumes about his own obsessions: with detail, with correctness, with authority. 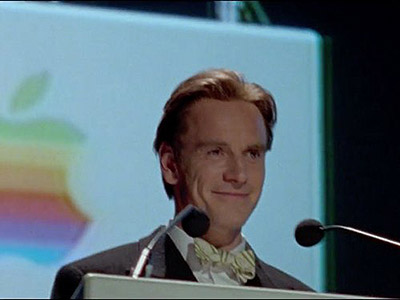 
Boyle's biopic doesn't shy away from suggesting that Jobs was nothing but an aggressive marketeer, particularly in a cutting scene in which Seth Rogen's Steve Wozniak pointedly says of his former partner: "You can't write code, you can't design, you can't take a hammer to a nail... What do you do?" Steve's response - "I play the orchestra" - is frustratingly vague but fitting for the man's allure. What he did, whatever it was, was something that no one else did better, and Sorkin and Boyle do a brilliant job of capturing his mercurial nature without ever nailing the specifics.

The format of Sorkin's script is ideal, playing out over three product launches over 14 years: the Macintosh in 1984, the NeXT personal computer in 1988 and the iMac in 1998. This ties the man to his machines, and with the greatest respect to Steve Jobs, it's as Woz says: "Your products are better than you are". Jobs defined himself by his work and so it is here, even if Sorkin shoehorns in a family dynamic with a little too much vigour; daughter Lisa, who Jobs disowned for the first nine years of her life, always seems to be around in the moments directly preceding her father's product launches. (It's a criticism cleverly deflected by Sorkin; after the third launch in a row is ambushed by Important People In Steve's Life, Jobs mutters: "It's like five minutes before I'm due to go on stage, everyone hits the bar and tells me what they really think"). 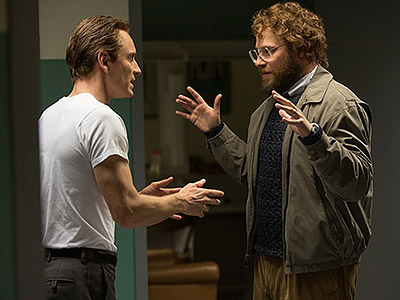 
Despite initial reservations about his physical resemblance to Jobs - he's white, and a man, so he'll do! - Fassbender proves to be an excellent lightning conductor for Sorkin's charges of energy. There is little sign of the temper that supposedly terrified his subordinates - Fassbender's Jobs is cool and collected and preloaded with disarming quips and outlandish boasts. This is a new benchmark for the actor: rarely troubled by an over-exuberance of dialogue, Fassbender has a firm grip on the Aaron Sorkin dialogue machine gun and shows little sign of recoil - his is a breathless performance that never once disconnects.

With all manner of farce and tragedy unfolding behind the stage, there's a heightened feeling of theatrics too - enforced by surges of slick Sorkin dialogue that just roll off the page - lending proceedings a stagey feel. It's strangely fitting, given the pivotal moments of Jobs' career took place on a stage, so Boyle is wise to lean into the hammier elements of his story; the patented Walk 'N' Sork is in full effect, whisking Steve and his coterie around the building when sitting at a table would do; rain lashes against an office window as Steve is ousted in "the worst night of [his] life"; minutes and seconds seems to stretch and go slack depending on how many more points Jobs wants to cram into his argument. Time slows when Sorkin has something to say. There is a very distinct Dickensian feel to how Steve's story pans out; each launch he is visited by ghosts of pissed off past. Mythologising Steve Jobs is dangerous, but portraying him as a 20th century Scrooge works for me.

More:  Steve Jobs  Danny Boyle  Michael Fassbender  Kate Winslet  Michael Stuhlbarg  Seth Rogen  Apple
Follow us on Twitter @The_Shiznit for more fun features, film reviews and occasional commentary on what the best type of crisps are.
We are using Patreon to cover our hosting fees. So please consider chucking a few digital pennies our way by clicking on this link. Thanks!