Here's something that shouldn't be a thing: any director, cast member or studio that says "we made it for the fans, not the critics". Now, I would say that I occupy a space somewhere in between those two clearly very unique and separate positions. I'm an occasional blogger currently writing a review (that, heaven forbid, will be listed on Rotten Tomatoes) but who particularly enjoys superheroes and comic-book movies. So where does the DC party line of 'fans not critics' leave me? I'll tell you where - in the same place as literally anybody else who sees this film: with an opinion, and only that. Obviously, it should be argued as objectively as possible, but for the sake of DC's stance in the matter, let me try to review this like a fan rather than like a clueless critic doing super-serious critiquing on Marvel's payroll. With that in mind, Suicide Squad is a bit rubbs.


Because here's something else that shouldn't be a thing: big, powerful villains who stand around for ages surrounded by bright CGI lights and floating rubble apparently just looking busy for long stretches of the film until the (anti-)heroes show up. You know what else shouldn't be a thing? The same big, powerful villains not having any clear goal so you have absolutely no idea what it is they are trying to achieve (in this case, the god-like baddie says something about 'building a weapon' and that is literally the only agenda given).

While we're at it, here's another thing that shouldn't be a thing: so-called bad guys given a contrived moral code in order to force audience sympathy, but that doesn't hold up to close inspection. It's nice that Deadshot doesn't "kill women and children", but that still leaves fathers, husbands, teenagers and presumably pets, all of which he'll happily murder just for some cash. So why should we believe he is a bad guy 'but with a heart'?

What else shouldn't be a thing? How about overly fetishised female characters who - in keeping with their source material or not – have their scantily clad bottom on display at every opportunity? Also, what about scenes shoe-horned in to remind everyone that 'this is all part of a shared universe'? Oh, and editing around deleted scenes to leave some major narrative holes (at one point in this movie, a character leaves the 'squad' but then turns up again in the next scene alongside everyone else with no explanation)?

And don't get me started on introducing an important, morally-questionable character to the accompaniment of Sympathy For The Devil as if it's a fresh idea. 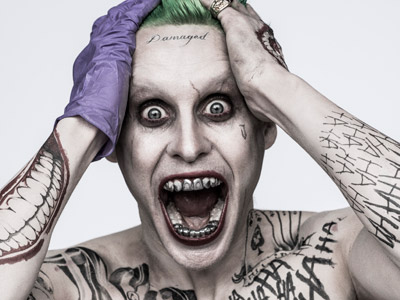 
Fan or critic, all of these are objectively bad things to happen in a film and, don't get me wrong, Suicide Squad isn't the only culprit of these movie crimes this year - Magneto in X-Men: Apocalypse carries out at least four of these complaints alone (although, sadly not the scantily-clad bottom one). The positive to take from all of these issues though is that, while Suicide Squad may be a guilty party here, at least it is still trying to be a party.

Because here are some things that should be more of a thing: a sense of humour in a DC film, Batman being awesome at being regular old Batman, everything about Margot Robbie's performance, Jared Leto as the Joker, cool and edgy comic-book costume designs, fun on-screen graphics, the Joker's creepily masked henchman and the sight of a man in a giant panda costume wielding a machine gun.

Suicide Squad isn’t horrible. It attempts a lot of cool, fun stuff that sets it apart from all existing comic-book properties, and the result is a hardcore, colourful tone that is so much more enjoyable than the epic bleakness of Bats V Supes, but it is still a hardcore, colourful mess. It’s an ensemble movie that gives clear focus to three main characters, leaving several others largely forgotten and unexplored. Jai Courtney, of all people, gives a surprisingly funny performance as Captain Boomerang, but the character is so inconsequential in the grand scheme of the plot that he might as well not be there at all. And every time Katana pops up on screen seems designed to only remind the audience that she exists in this film at all. 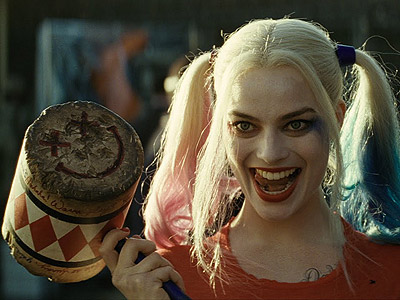 This mallet made more of an impression and we don't see it outside of this one shot.


Elsewhere, of course, Margot Robbie’s Harley Quinn unsurprisingly steals the show, pitching her care-less, crazy-nymph character like an X-rated cartoon animating every scene in gleefully unpredictable ways. But even she suffers from infrequent, clunky one-liners and a thinly-sketched backstory; issues that are prevalent throughout the film and, along with occasionally dull action sequences, make for a muddied, fumbled journey from origin to climactic fight.

But then what do I know? As a fan, I am vastly underqualified to critique a movie, and as a reviewer, I am hopelessly out of touch with the intended demographic here. But I like movies, and so do lots of other people. You’d think that would be enough for DC in terms of a target audience. If they could forget the ‘fans not critics’ agenda and make a movie for people who just like movies, then who knows? I might, y’know, actually like it.

More:  Suicide Squad  DC  Batman  David Ayer  Margot Robbie  Will Smith  Joel Kinnaman  Jared Leto
Follow us on Twitter @The_Shiznit for more fun features, film reviews and occasional commentary on what the best type of crisps are.
We are using Patreon to cover our hosting fees. So please consider chucking a few digital pennies our way by clicking on this link. Thanks!