Sully: Miracle On The Hudson

In times of crisis, look to Hanks. America's on its arse and what it needs now more than ever is a man whose Twitter account is dedicated to finding gloves on the streets of New York, not making baseless claims of voter fraud. Inferno got it wrong, but Sully understands better what sort of hero Hanks can be: the kind who manages to land a malfunctioning aeroplane but afterwards just wants everyone to stop going on about it.


Sully caps off a less-than-vintage year for Hankswatchers, with A Hologram for the King a good vehicle for him on paper but ultimately a bit thin, and Inferno drastically misunderstanding what the point of him is. Its director Clint Eastwood, never a man to step out of his own comfort zone, or even his favourite comfy chair, was never going to ask his star to give him anything off-menu, so what we get here is standard three-course Hanks: ageing, slightly stuffy American guy to whom something big happens and he makes as good a fist of it as he can. 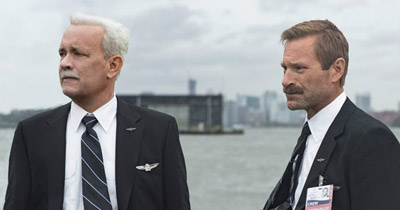 The plane was brought down by geese flying into the engines, and yet America's War on Geese remains undeclared.


Now, this is just about my favourite meal, but it's nice when you get a bit of a bonus garnish thrown in, like Captain Phillips does with its powerful post-trauma panic attack scene. Sully doesn't do this. In fact, it does so little extra beyond what it's obliged to by telling a true story that you wonder what inspired Eastwood to bother with it.

American heroism, is probably the answer: Clint bloody loves America, and especially folks who save American lives, ideally by killing foreigners. Though he didn't manage the latter, Chesley "Sully" Sullenberger heroically landed his plane on the Hudson River in 2009, saving the lives of everyone on board, and is a nice, unassuming old guy with a moustache, thus making him prime Clint fodder. We see the emergency landing (not a crash landing, as Sully is keen to stress later), shot nervily as a reminder that Clint has it in him to raise the pulse, and then revisit it a bit as we go along, but mainly we are in rooms and people are talking.

You can make pretty compelling films about people talking in rooms, but oddly Clint doesn't seem all that bothered about trying to: mainly he just wants to guide you through the events (Sullenberger was investigated by the National Transportation Safety Board, who thought he could've managed to get back to LaGuardia rather than bring the plane down in the drink) and then, well, just sort of stop. Sully's problem is not so much that it's uninteresting; it's that it doesn't make much of an effort to justify why you aren't just reading the Wikipedia page. 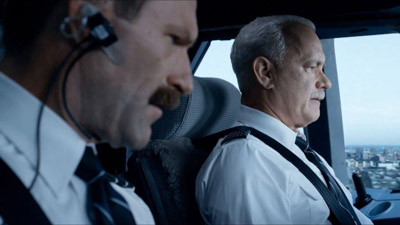 I realise I haven't mentioned Aaron Eckhart at all in this review, but his moustache is truly outstanding and demands to be seen on the big screen.


In this Hanks actually pulls off something remarkable, in-keeping with his surroundings: his least demonstrative performance. He is still and calm throughout proceedings, but on another level to comparable outings like Bridge of Spies or the first half of Road to Perdition, seeming to want to melt away into the background till it's all gone away. As generous an actor as he usually is, here he's sacrificed any chance of personal plaudits on the film's behalf.

But there is a problem with using Hanks as he's intended, and it's that he's an automatic weapon to put the audience on a character's side. Because it's him, there's never much doubt how the whole thing's going to turn out, and thus not much of a conflict at its heart. It all seems a bit incidental somehow, like it doesn't know what it's doing there. The inquiry ends without any great twist or courtroom grandstanding, and we put on our coats and file out.

I suspect this or next year will prove to be pivotal in Tom Hanks's career, like his 1991 sabbatical when he reviewed where he'd been going in the post-Bonfire of the Vanities fallout and decided on a new path. It's around now he'll need to work out whether he wants to settle into unchallenging old-guy roles or shoot for something heftier; the sort of acclaimed twilight enjoyed by your Ian McKellens. He's done plenty to earn the right to slow down, but Captain Phillips showed as recently as 2013 that there's still plenty left in the tank. I think he still has another truly great role to come, but this isn't it.

More:  Sully Miracle On The Hudson  Clint Eastwood  Tom Hanks  Aaron Eckhart  Laura Linney  Mike OMalley  Anna Gunn
Follow us on Twitter @The_Shiznit for more fun features, film reviews and occasional commentary on what the best type of crisps are.
We are using Patreon to cover our hosting fees. So please consider chucking a few digital pennies our way by clicking on this link. Thanks!