Master of mystery JJ Abrams (*swishes cape, puff of smoke*) kept his cards close to his chest in the run up to release of Super 8. Was it a Cloverfield sequel? Was it somehow connected to Lost? What was the meaning of all of the clues scattered throughout the enigmatic teaser trailer? Could JJ's nose be pushed any further into Steven Spielberg's rectum? But the most important question of all could only really be answered after viewing it: why should we give a damn about yet another alien invasion movie?


The answer is simple: because it's pretty great.

The set-up is pure Amblin entertainment: pint-sized adventures and personal stories set against a backdrop of huge spectacle. Our protagonists are a gang of misfit kids who sneak away from their parents under the cover of darkness to help film a home movie, because it is 1979 and paedophiles haven't been invented yet. While filming at a train station, the kids are witness to a catastrophe: a car drives onto the tracks and derails a US Army train carrying an extremely sensitive cargo.

E.T. comparisons are obvious but wide of the mark – although the format isn't quite the same, Super 8 is more of a cousin to Cloverfield. The action beats are mostly like for like; the sudden bluster, the thrashing scenes of panic, the stolen glimpses of something otherworldy. But where Matt Reeves' monster movie had disposable yuppies as alien chow, the youngsters of Super 8 are more innocent and thus make for more palatable heroes. 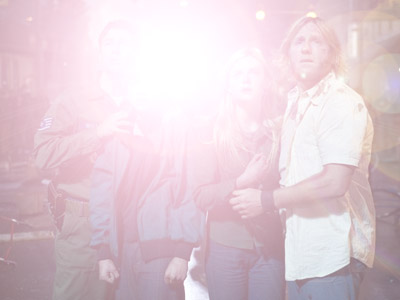 When you can see them.


They're not placed in danger as much as they could be, but their inclusion gives Abrams an excuse to shoot everything with that 'childlike wonder' he's so fond of. By which I mean 'cover everything in lens flare'.

The kids are uniformly excellent, though Joel Courtney is particularly good as lead sprog Joe – that rare breed of child actor that you don't want to grab by the scruff of the neck and march into the nearest, strictest drama school. Abrams must marshal a relaxed set, because the scenes in which the kids muck about feel natural and unscripted, meaning later scenes of mild peril carry some dramatic weight. Kudos also to Elle Fanning, who seems about one micron as pretentious as her older sister. 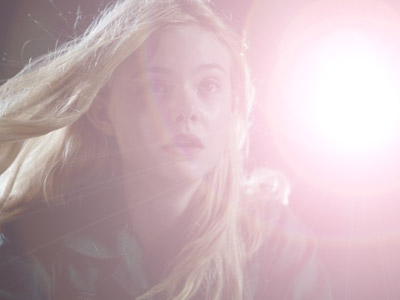 Think this is her.


Though it's easy to spot the influence of executive producer Steven Spielberg – daddy issues, Close Encounters nods and big EMOTIONAL moments spelled out in CAPITALS – Abrams is running the show and doing it bloody well. The opening train crash is sensational – an absolute triumph of visual effects, pyrotechnics and sound design that shakes the screen and rattles the speakers. Action scene of the year by a mile.

Later, an alien attack on a bus is storyboarded to perfection; an excruciatingly tense and visceral set-piece that still manages not to show off too much. Shame, then, that the big last act reveal is a bit of a letdown, as these things we're teased almost always are. (These things are almost always not motion-captured by Bruce Greenwood, however.) 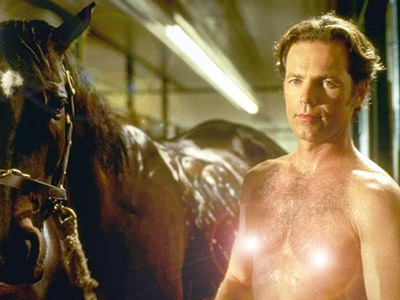 
The worst thing you could say about Super 8 is that it's a little indulgent. There's no logical reason it's set in 1979, say, apart from that it's the era in which Abrams grew up and Spielberg reigned supreme. The plot is chock-full of macguffins which do little for the overall narrative other than flash loudly and announce themselves as 'JJ Abrams' Acme Plot Devices'. And, in finest Spielberg tradition, the family dynamics are over-played: apparently, perfectly functional family units do not exist in Hollywood.

Still, Super 8 is undoubtedly one of the more robust summer blockbusters of the year, with enough momentum to get it over the finish line before you start asking more questions of it.

More:  Super 8  JJ Abrams  Steven Spielberg  Aliens  Elle Fanning
Follow us on Twitter @The_Shiznit for more fun features, film reviews and occasional commentary on what the best type of crisps are.
We are using Patreon to cover our hosting fees. So please consider chucking a few digital pennies our way by clicking on this link. Thanks!