We’ve had Thor, X-Men: First Class and Green Lantern already this year, showing us that the ‘comic-book movie’ is showing no signs of hanging up its cape. So a film that explores what it’s like to actually become a superhero in the real world is a refreshingly interesting take on the genre, isn’t it? Well, you wouldn’t think so in this post-Kick-Ass world, but Super is surprisingly great thanks to being even more realistic-ier.

Because while the excellent Kick-Ass very quickly dropped it’s real-life pretence and delved into fanboy fantasy, Super isn’t anywhere near as clean-cut. Marketed primarily as another comedy vehicle for US Office worker Rainn Wilson, the film contains as many tragic moments as it does comic ones. And with some pretty horrific scenes of what you assume would just be ‘comic-book violence’, accompanied by no clear moral agenda whatsoever, this is about as real as it gets. 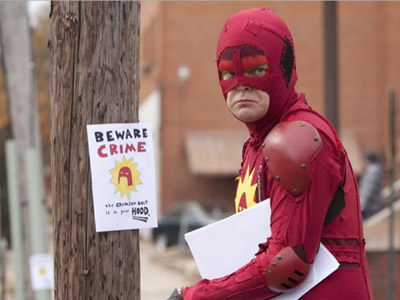 Although still obviously very much fictional.


Wilson stars as Frank, an unremarkable man whose relatively dull life seems to give his undeservingly hot wife Sarah (Tyler), a recovering addict, enough reason to leave him for drug dealer Jacques (Bacon). This in turn leads Frank to right the many wrongs in society by taking on the crime-fighting persona of the Crimson Bolt. His often questionable brand of justice attracts the attention of wannabe-sidekick Libby (Page) and ultimately leads him back to Jacques, his greatest nemesis.

Almost immediately, it becomes apparent that Super is not the quirky comedy that many may be expecting. Frank is, from the outset, a pathetic character who warrants our sympathies above all else. An early prayer to god following Sarah’s departure helps to set the tone of the film, being equally silly and pitiful. Wilson is perfectly cast in the role; at first less pompous and assertive than his Office character Dwight Shrute, but becoming increasingly more desperate as his grasp of morality runs away from him. 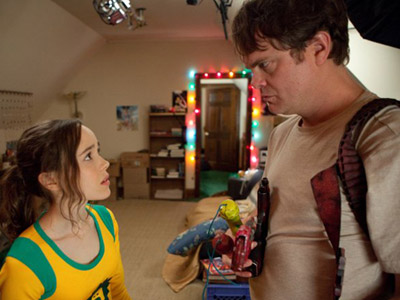 Did I mention that it verges on paedophilia too?


In addition to these two leads, Bacon turns in an excellent ‘bastard’ as Jacques, swaggering and smirking as he tramples all over Frank’s formerly happy home life and making sure that his wife Sarah is increasingly fucked-up and docile as a result (meaning that, by comparison, Liv Tyler gets little chance to shine). In a film where all intentions and ethics are deliberately ambiguous, Bacon provides the one certain focal point for where things are headed: this utter tosser must surely get his comeuppance.

Overall, where Super struggles is in maintaining the tricky balance between pathos, comedy and graphic violence. When Frank hits a stranger square in face with a wrench for jumping ahead in a queue, his overreaction is funny, but the sight of the guy’s nose splitting open is simply shocking. It doesn’t make for an easily digestible movie but this is obviously meant to be the point – in a world where everything isn’t as cut and dry as ‘good versus evil’, rationality is increasingly rare. Accessible, it may not be (even with great comic moments, including a hilarious Nathan Fillion cameo), but it makes for an intensely affecting film that will stick with you for days after viewing.

More:  Super  Rainn Wilson  Ellen Page  James Gunn
Follow us on Twitter @The_Shiznit for more fun features, film reviews and occasional commentary on what the best type of crisps are.
We are using Patreon to cover our hosting fees. So please consider chucking a few digital pennies our way by clicking on this link. Thanks!