Guys: don't marry Michelle Williams. Never happy, that one. She's been married to Ryan Gosling, Heath Ledger (though admittedly he was bumming a guy in a tent behind her back) and now Seth Rogen, and you'd think that'd be enough for most girls, but not her. Wants the moon on a stick, she does.

Truly, she's cornered the market in the ennui of the young and recently married. There's no one quite like Williams for sullenly icing a cake or hanging out the washing in an extended opening credits sequence, then gazing out of the window thinking, "Not all it's cracked up to be, this whole marriage caper. This man whom once I loved seems vapid and the spark of our early exchanges, which in a minute I'll recall in montage form, is but a distant memory." Words to that effect, anyway.

There's less of this obvious set-up at work in Sarah Polley's Take This Waltz than you'd think. Sure, Williams is in familiar territory as the young wife searching for something more, but instead of plunging you into the extra-marital BOW-chicka-bow-BOW you're expecting, it leads you down a different, and ultimately very satisfying, path. 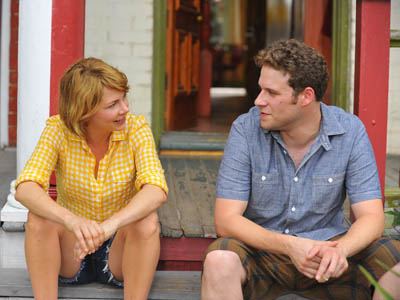 "If we painted our porch to look even more casually Mediterranean, would it help our relationship?"


Through a slightly silly but nicely-played-out coincidence, Margot (Williams) finds that Daniel (Kirby), the guy she flirted with harmlessly on a plane, is her neighbour, and she begins to fall for him, despite having been married to Lou (Rogen) for five years. But here's where it converges from the expected route: she loves both of them. It would be easy – especially with Rogen in the role – to make Lou an immature, fun-loving sort whose former youthful appeal we can understand, but whose failure to grow up and meet her needs as a husband equally lets us appreciate the appeal of the greener grass across the street for Margot. (The trailer, probably eager to attract Seth-heads, pretty much suggests this.)

But no: he's a great guy. He's basically what you imagine being married to Seth Rogen would be like, only he isn't stoned all the time. They squabble a little, but no more than is normal. Polley could cop out at any point and show a big fight so we dislike Lou a bit, but never does: in terms of the story, Margot has to take responsibility for the decision she makes.

All of which makes it sound like there's a huge affair going on; again, it's less obvious than this. Margot and Daniel share an attraction and an instant rapport, and satisfy themselves by secretly spending time together without so much as kissing. What could be frustrating for us becomes an engaging little non-contact sport, best illustrated in an expertly choreographed scene where they swim together underwater, swooping in and out of each other's path without ever touching. 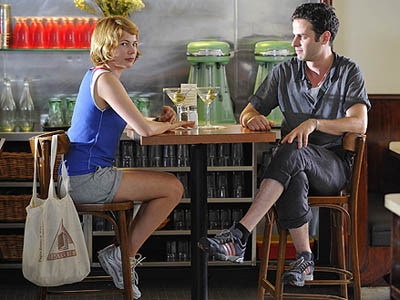 Williams, out for hamburger when she has SETH-STEAK at home.


Though all this ultimately takes us where we want, there are imperfections along the way: Sarah Silverman is drafted in to play Lou's recovering alcoholic sister, and while she does a perfectly good job (one overly-comedic drunk scene aside) there's little need for the character to be there other than a big summing-up speech at the end.

I should say the ends: there are at least three points in the last half-hour where you're picking up your coat to go home, sure that the credits are about to roll, before it starts up again. And somewhere in this final reel is a scene so insane it comes close to ruining the whole thing before just about managing to drag you back from the brink.

This is maybe the point, though: Polley's pushing us to the limit of what we're prepared to accept from a central character, testing the boundaries of our sympathy in a set-up we feel familiar with. Go with it and there are rewards here, not least in a nicely restrained performance from Rogen and a similarly understated, if familiar, one from Williams. Just don't get sucked in and marry her. It'll be all piggy-back rides on the beach to begin with, but when you see her staring out of the kitchen window at 3pm, just pack a bag.

More:  Take This Waltz  Michelle Williams  Seth Rogen  Sarah Silverman  Luke Kirby
Follow us on Twitter @The_Shiznit for more fun features, film reviews and occasional commentary on what the best type of crisps are.
We are using Patreon to cover our hosting fees. So please consider chucking a few digital pennies our way by clicking on this link. Thanks!