When Liam Neeson uses his particular set of skills - y'know, the ones that he has acquired over a very long career - to hunt you down, it turns out that what he'll do to you is nothing compared to the butchering you'll receive in the editing suite afterwards.


After Taken was a surprise hit, it seems to make every sense to us fans who are now four years older, for the sequel to be skewed towards a younger audience. Of course it does. I remember, after the first time I saw the action-packed, gun-toting, bone-breaking original, thinking "I really enjoyed that, but I think it would be much better with less gun-toting and bone-breaking. And if it could be packed with less action too, that would be great".

Actually, for the most part, that's a bit of an exaggeration. The jump from a 15 to a 12A certificate may mean that any overt references to sex-trafficking and heroin are gone, but this is still a fast-paced thriller with car chases and rooftop pursuits and tons of bullets. It's just that most of the work done to get this rating has been achieved in hindsight, and not a jot of care and attention has gone into editing out the bloodshed.

This attitude is a problem throughout, actually. Even Neeson himself, who surprised everyone first time round with his action hero frame and kick-punchy abilities, is looking decidedly less trim and lean in this film. It’s like he and everyone else involved was thinking "well, this will be a hit no matter what, so why bother putting the effort in for it?" 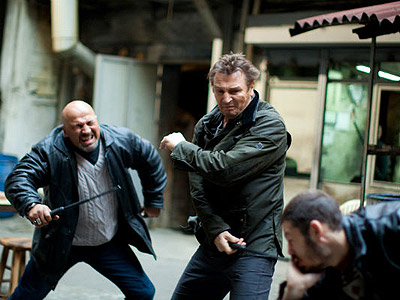 Apart from the guy on the left. He's totally in the moment.


Nowhere is this laziness more apparent than when the script slips into moments of pure hole-ridden plot lunacy. As revenge for all the bad guys killed in the first film, the head daddy villain gets his revenge by ‘taking’ Neeson and his ex-wife. Only daughter Maggie Grace - you remember, the one who runs like a spaz - gets away from her captors, leading to misguided mishaps as an imprisoned Neeson tells his untrained, squeamish daughter how to find them. And he does this using a secret personal phone. Which he could have used to call the police.

There follows a ludicrous search and rescue plan: without getting into details, Neeson’s ex-CIA training reaches all-time high levels of implausibility as he roughly ascertains his location on a map of Istanbul by getting Maggie to draw a series of overly complicated circumferences on it – because geometry saves lives, kids. Then, as she gets nearer to him, he asks her to throw a series of grenades so he can listen out to how close she is to him. GRENADES. Mr Neeson, sir, as an upstanding moral man – a former government agent, even – are you entirely sure you want your daughter spazzily running across rooftops haplessly throwing explosives, at times without looking, like she’s on some kind of destructive rampage? 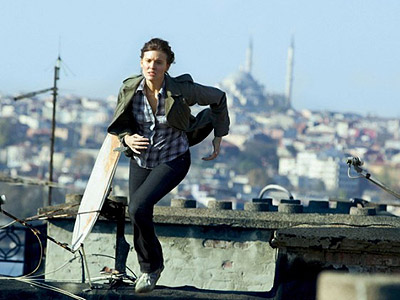 Seriously. This was a better option than calling the police?


And yet, any amount of ridiculous plot points and clunky dialogue (“I just shot some guy” helpfully explains a henchman, meanwhile Maggie Grace tells her dad that Famke Janssen described their love as “super special”) can be taken with a pinch of salt in any balls-to-the-wall actioner. What is unforgivable, however, is the slapdash editing resulting in entire scenes losing all sense of cohesion and meaning. In an attempt to achieve the 12A rating, split-second shots of violent acts have been cut out in such a heavy-handed fashion that you’re left going “W-wuh? But… w-wuh?”

At one point, an important character is held with a knife to their neck and then it cuts to immediately after some kind of slicing. Did they just get their throat slit? As it turns out, no - it was just their cheek, but how were we supposed to tell? A climatic fight in which a bad guy looks set to kill Neeson gets turned around in the blink of an eye and now the bad guy is dead. How? Sorry folks, you'll have to wait for the Uncut Never-Before-Seen Uncensored Edition on DVD. In particular, the most anticlimactic moment of the entire film comes when a guy is apparently despatched by Neeson just gripping his face really hard. 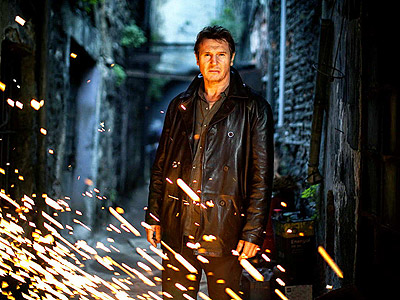 
Overall, this is the film that many were expecting first time round. Oskar Schindler as a badass CIA agent? Pffft – sounds hilariously dumb. Now, despite some genuinely exciting moments, and a few great comic nods to Neeson’s hardened nature as established in the first film, we finally get to see exactly how hilariously dumb this whole idea is.

More:  Taken 2  Taken  Liam Neeson  Maggie Grace  Olivier Megaton  Luc Besson
Follow us on Twitter @The_Shiznit for more fun features, film reviews and occasional commentary on what the best type of crisps are.
We are using Patreon to cover our hosting fees. So please consider chucking a few digital pennies our way by clicking on this link. Thanks!