After 2009's The Princess and the Frog reminded us how wonderfully sublime traditional Disney animations are and, in the process, helped to apologise for the recent output of sacrilegious, straight-to-DVD sequels (something like Jungle Book II: The Killer Uprising or Bambi's Revenge), now the Mouse House is back with a new, energised take on its usual fairytale offering. Somewhere, deep in the bowels of a secret cryogenic chamber, Walt's disembodied head is smiling sweetly.

Taking on the story of Rapunzel (but changing the title to the more unisex 'Tangled' midway through production - because dads don't want their sons playing with no 'Rapunzel' doll, y'hear?), Disney injects its usual sense of magic and wonder into an obviously updated style of animation and storytelling. Essentially this is Pixar Does Fairytales, with added musical numbers. But rather than being in competition with its lamp-logoed company-counterparts, Tangled feels comfortable within its niche corner of the animation world. There are, after all, some things that only Disney can do well.

Starting with familiar fable traditions, old, hagged Mother Gothel kidnaps baby princess Rapunzel, who has been born with magical healing hair. Shutting her away in a tower and raising her as her own, Mother Gothel becomes - yes, you guessed it - a wicked stepmother, using Rapunzel's magic hair to keep her own face looking young and beautiful. Rapunzel, however, grows up locked within four walls and dreaming of the outside world while somehow maintaining a shitload of long, blonde locks. That is until roguish thief Flynn Rider stumbles upon the tower and is forced into a deal with the unwitting princess to take her on a special journey. 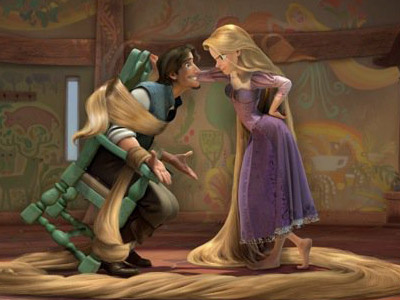 I refuse to believe he can't break free from this.

As is to be expected, the film looks stunning, particularly in 3D. Golden hair unravels and shines against recognisable folklore greenery, and, despite modern-day characterisation and rousing action sequences, the slight pastel colouring hints at the time-honoured simplicity and innocence of Disney's best-loved classics. Never is this more apparent than in a third act scene that sees Flynn and Rapunzel sitting in a boat with thousands of floating lanterns and their reflections lighting up the screen in a moment that is so tear-jerkingly enchanting, it trumps almost ever other memorable moment from the Uncle Walt archives.

So with a captivating backdrop, our two characters follow a formulaic, odd-couple road to romance, bickering at first, before readdressing their priorities. Zachary Levi (best known as TV's Chuck, though perhaps more so stateside) gets most of the laughs as a devilishly handsome charmer who lives in the moment, while former teen popstar Mandy Moore plays the forthright, strong-willed Rapunzel - y'know, the type of female character that's a modern role-model for today's young girls. While their relationship blossoms with typical predictability (this is, after all, only a kids film), the script remains fresh and exciting, with universal gags, and strong momentum in the form of Mother Gothel, the Stabbington Brothers (Flynn's old partners in crime) and the Royal Guard all in hot pursuit of the couple. 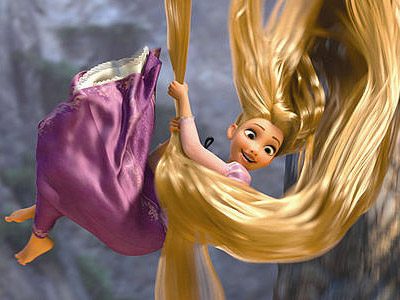 In real life, this would rip her scalp off


Even the musical numbers throughout the film - a Disney stalwart that is perhaps the most outdated of its traditions - are genuinely entertaining and, dare I say it, catchy. The fun songs are lifted by a collection of silly on-screen jesting, while tender melodies accompany the more touching scenes, tugging at little uns' heartstrings and, in one instance at least during my screening, moving them to tears. And by 'tears', I mean 'bawling their little eyes out while screaming'. It's a beautiful thing.

Overall, Disney has clearly stepped up their game to be a leading contender in animation once again. Mixing the universal appeal of newer competitors with the tried-and-tested magical charm of long-established classics, Tangled is a marvellous film that's as easy on the eye as it is on the ears. Shoe-horned Topical Comment Alert: And it should have been nominated for Best Animated Feature.

Right, I'm off to reclaim some manly points and watch The Terminator, or Tango and Cash or something.

More:  Tangled  Disney  Mandy Moore  Zachary Levi  Donna Murphy  Byron Howard
Follow us on Twitter @The_Shiznit for more fun features, film reviews and occasional commentary on what the best type of crisps are.
We are using Patreon to cover our hosting fees. So please consider chucking a few digital pennies our way by clicking on this link. Thanks!