10-20 years from now, future generations will look back on this decade and cringe at how their parents and grandparents belly-laughed at the offensive, nonsense humour of Seth MacFarlane, in much the same way as we do now at old sitcoms from the 70s. Clips of Family Guy's most near-knuckle gags will be shown in TV documentaries that explain how the 2010s were a less civilised era, before society learned to behave like better people. Luckily, we are already on the cusp of more progressive times as the tide has started to turn against the squeaky-faced MacFarlane’s now-familiar string of stoner/racist/pop culture/left field references. 2015 is truly a cornerstone year as MacFarlane Fatigue has firmly set in and, on the basis of Ted 2, it's easy to see why.


It's hard to think of anyone in Hollywood who has become more of a victim of their own success than Seth MacFarlane. With smash-hit animations (and The Cleveland Show) to his name and a surprise monster hit in Ted, MacFarlane is the perfect example of a creative type who is now trusted to do whatever he wants with no one daring to keep him in check any more. As a result, Ted 2 feels lazy and self-indulgent. It's a film where there are huge stretches without any passable joke, where quite often a Boston-accented soft toy calling his wife a "who-ore" is supposed to be funny and where there are so many punchlines that depend on singling out black people that, at this point, you have to wonder how much of it is schtick and how much of it is MacFarlane's own deeply rooted prejudice. 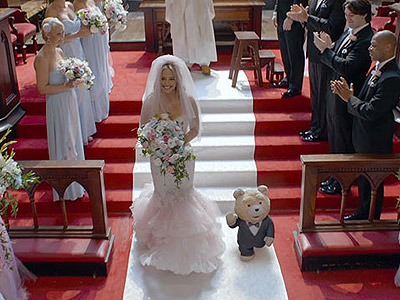 He didn't even give that guy on the right a line to say or anything.

It also ends with a spectacular anti-climax when, after a quickly forced moment of mild peril involving returning villain Giovanni Ribisi, the major issue of the whole film – whether or not Ted can win his legal case and be classed as a 'person' – is wrapped up in a few short minutes. But it’s ok, because most of the final act is also staged at Comic Con, allowing MacFarlane to just visually display a hundred pop culture references all fighting each other without even having to think of a single relevant joke between any of them.

But, alas, we are still not in the enlightened times of the future just yet. Audiences will still find several moments and lines in the film genuinely funny. Recurring gags about hashtags, complimentary sweets and – because of course – black cocks do occasionally land well, but only really when they seem like off-the-cuff remarks rather than anything with an elaborate set-up. Sadly, because the film is so devastatingly underdeveloped elsewhere, both in terms of script and tone, you’ll feel guilty for laughing at the bits that do work. 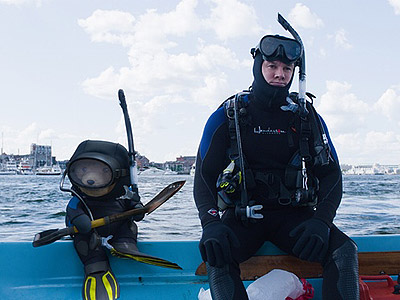 Hahahahaha! Oh wait, wasn't he just sexist and racist and homophobic a minute ago?


Overall, it’s just about an acceptable sequel. The absence of Mila Kunis is felt throughout thanks to her and Mark Wahlberg’s John now being divorced (which pretty much shits on ever rooting for them in the first film), but Amanda Seyfried does the best she can to make up for the lack of oestrogen in the movie. Most of all though, despite a mere couple of stand-out moments, Ted 2 has a lower gag rate and more punchline misses than its predecessor. In short, it’s a film that just reeks of having no real purpose.

And so the future generations will look back on these years with mild disgust, barely able to comprehend how such a distasteful film can pass as humour in this day and age, and they will say: "Things were different back then. It was a simpler time. They didn’t know any better."

But we should, guys. We really should.

More:  Ted 2  Ted  Mark Wahlberg  Seth MacFarlane  Amanda Seyfried
Follow us on Twitter @The_Shiznit for more fun features, film reviews and occasional commentary on what the best type of crisps are.
We are using Patreon to cover our hosting fees. So please consider chucking a few digital pennies our way by clicking on this link. Thanks!