I have a love/hate relationship with Family Guy, and Seth McFarlane by association. Nothing about it is particularly clever or witty or considered – in fact, the laziness and sloppiness of the writing is often shockingly cavalier; stale pop culture punchlines and routines straight from the 'We can't be bothered to finish this joke, so that's the joke' school of comedy. Yet in spite of myself, almost by accident, I still find myself laughing at it from time to time – usually when I'm shattered at the end of the day and lapsing into sleep. It's hardly a glowing endorsement, but the occasional LOL does elevate Family Guy above 'no way and no how' programming like Two And A Half Men.


Ted, like Family Guy – and indeed McFarlane's other near-identical animations, American Dad and The Cleveland Show – nestles in the same category: funny but not funny often enough. The core concept retains the 'Guy' but ditches the 'Family'; Mark Wahlberg is manchild John whose reticence to grow up is actualised by his best friend Ted, a teddy bear who came to life when John was just a kid but now boasts an adult attitude and a similar reluctance to maturity. Together, they drink, play videogames, smoke pot and vegetate on their sofa, while John's gorgeous and extraordinarily patient girlfriend Lori (played by Mila Kunis) threatens to spoil their fun simply by existing. 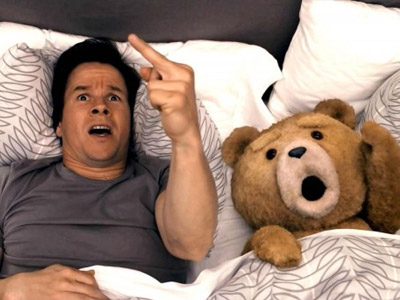 Seriously, Lori. Get the fuck out of the bedroom.


This is unmistakably a Seth McFarlane project – not only does the humour feel instantly familiar, but Ted is voiced by his creator and even motion-captured by him too. Unfortunately, this familiarity works against the film – you can't help but think the script is cobbled together from Family Guy offcuts and other scribbles from McFarlane's list of 'Totally topical pop culture references to hate on'. There's your layabout lead and his talking animal friend; a foreign person who talks funny; Patrick Warburton; a hot girl whose interest in the protagonist is never explained; there's even a fight scene between man and beast à la Peter vs Giant Chicken. A throwaway one-liner playing up to the similarities between Ted and Peter Griffin is not cute enough to dilute its accuracy.

The movie's funniest moments are ones that are unique to these characters: Ted's increasing frustration with Giovanni Ribisi's stalker weirdo ("Can you email me the rest of this conversation?"); a frustrated Wahlberg listing white-trash girls' names; Ted recalling the names of the various strains of weed he was offered ('Gorilla Panic', 'They're Coming They're Coming' and 'This Is Permanent'). When McFarlane and his writers steer clear of the crutches of crudeness, the results are more hit than miss, but all too often, they go back to the wells of ill will: racism, homophobia and jokes aimed at celebrities. A disparaging Katy Perry joke? Ooh, cutting! Way to stick it to an incredibly easy target, Seth! Who will you aim your ire at next? Justin Bieber? Oh my god, can he say that? 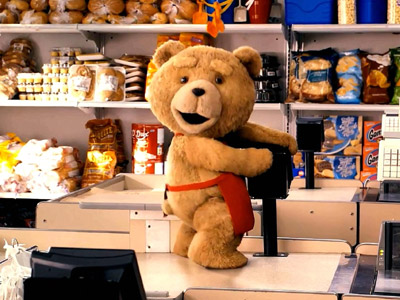 They don't care WHOSE toes they step on!


Regardless of how amusing the occasional set-up and punchline may be, too many gags leave a sour taste. South Park gets away with racist/sexiest/homophobic gags because the humour comes from the mouths of obnoxious children or idiots; when both Ted and John makes crude remarks about Muslims and 9/11, they're not being set up as the objects of pity – if the movie is clear about one thing, it's that John and Ted are being painted as aspiration figures. One set-up, which sees Ted and John party with coked-up Flash Gordon star Sam Jones (a riff on Harold and Kumar's wacky adventures with Neil Patrick Harris), contains an Asian character so grossly offensive it's a wonder the actor playing the part didn't fully commit to the stereotype and commit hara-kiri in shame.

Your enjoyment of Ted depends entirely on your sense of humour – if you're willing to entertainment the odd spiteful sideswipe and off-colour gag, you'll probably enjoy it more than me. However, if you like comedy born out of wit and intelligence, it'll leave you wanting. Like Family Guy, Ted's obsession with fame, celebrity and brainless sight gags means it's content being merely funny now but forgettable in the long term.

More:  Ted  Seth McFarlane  Mark Wahlberg  Mila Kunis
Follow us on Twitter @The_Shiznit for more fun features, film reviews and occasional commentary on what the best type of crisps are.
We are using Patreon to cover our hosting fees. So please consider chucking a few digital pennies our way by clicking on this link. Thanks!