Man, oh man. Someone's got some money to spend. Four million dollars an episode, Steven Spielberg on board as exec producer, and a shit-tonne of CGI dinosaurs. Welcome to Terra Nova.

The year 2149. A dystopian society, a planet which mankind has ruined through its avarice. It is THE FUTURE and it is all futuristic and stuff. Therefore, in TV/movie-speak, certain things must apply.

First, nobody wears jeans. Despite its being the most durable, practical and popular material for trousers mankind has ever come up with, in just 150 years denim is nowhere to be seen. The inside of your house is all dull, utilitarian steel, your only wall decorations air ducts. Vehicles are called 'transports', mankind obviously having evolved long past the need to use a word so redundant as 'car'.

In this futurey future-world live the Shannon family, who have one more child than the allotted maximum two ('A Family is Four', say the Orwellian advertising signs). Round come the secret police to check on them and find Zoe, the extra daughter, so of course father Jim slugs one of them in the face because he. Will. Do. Anything. for his family, and he ends up in future-prison. 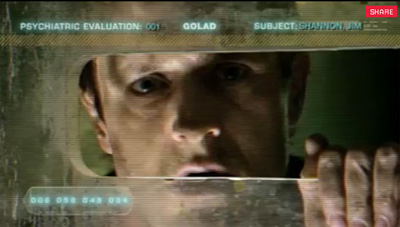 Future-prison is just like proper prison, except you're kept behind a perspex sheet, which isn't as secure as bars but hey! sure looks futuristic, don't it?

Two years later, wife Elisabeth comes to visit and tells him the family's been selected to go to Terra Nova, a colony camp in a verdant, unspoilt world 85 million years ago, where mankind is starting again. Access is through a big time-hole thing. Jim escapes so he can join his family and, despite the human race now having developed the most complex, watertight, retina-scanny, electronic-beep-beepy, chip-in-everyone's-leg security systems imaginable, he manages to make it through the time-hole and to Terra Nova by virtue of, um, elbowing a guy in the face and making a run for it.

Once there he's quickly allowed to just get on with it and, because he was a Chicago cop, is appointed to work on the security detail of Commander Taylor, who seems to be the leader of the whole thing. But he has a beard and probably a secret, somehow connected to some formulae written on rocks somewhere. Oh, and there are dinosaurs outside the colony, so you can't go out there, K? Unless you're rebellious teenagers, of course. 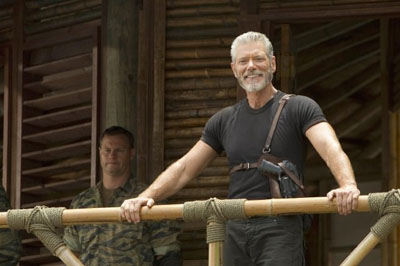 "That's right: inside, every wall is basically a massive iPad. Why do all the buildings look like wicker furniture then? Er ... look, shut up OK? I'm the COMMANDER."

You'll have noticed a focus on simple relaying of the plot in this review. There are two reasons for this. The first is that we're talking about the season one premiere and it's important to ground it in context. The second is to delay the inevitable, because Terra Nova is really quite ropey.

I wish it wasn't. But for all its incredible, groundbreaking-for-TV effects and obvious epic aspirations, Terra Nova is at its core just daft. The explanation for how the time-hole thing works comes in a shower of porridge-thick exposition by the Shannons' science nerd daughter (but hot science nerd, obviously) when she and her siblings stumble across the probe that was originally sent to explore the possibility. It is now on a plinth, around which she walks, explaining everything. People do that.

Later on, the father and his son fall out, notionally because the father left him in order to be in prison for a couple of years, but more probably because Spielberg invoked the 'daddy issues' clause in his contract. Why do we care about this? It's a teenager behaving like one. We're also now entirely removed from the world of injustice that put the guy in prison in the first place, and we don't really feel like we need to sympathise with him over that any more: he escaped; he's fine; get over it.

Credit where it's due, though: the dinosaurs, despite a disappointingly Barney-looking brachiosaur being the first out of the box, do look awesome. We're treated to a couple of chase scenes and an obligatory 'let's hide in this vehicle and stay really still then the dinosaur will go away' moment, and in both we see the effects doing exactly what they're supposed to do: make you think, Shit, that looks good. 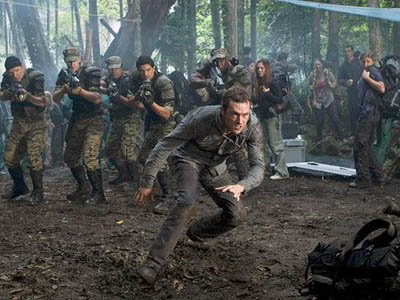 Terra Novans, a simple people, play khabadi at gunpoint to determine who has to clean out the Triceratops litter tray.

There is mention made of two ways to get from 2149 to Terra Nova: a lottery or some kind of selection process, the latter implying some sort of meritocracy. Elisabeth Shannon and her family have been chosen because she is a doctor, for example. And this being a network TV show, the population of Terra Nova are of course all impossibly pretty. So uggos don't get in, it seems. More disturbingly, neither do any disabled people, none of whom are anywhere to be seen. The Chinese also appear to have been wiped out, and I counted one black guy. No wonder Spielberg was so keen to get this off the ground: he's always doing films about how there should be a master race.

There's a serious point behind this: here is a cast of characters too perfect, too model-like, and ultimately not likeable enough to care about. No doubt there are things to be explored. We're on similar ground to Falling Skies here: we get to see how humans re-organise a society from scratch, how hierarchies form, how the social order is established and challenged. This is still interesting, but there's a key difference: in Falling Skies I was interested in the characters and their new society, with a few exceptions. In Terra Nova I just feel like I'm watching a Gap advert. With dinosaurs.

More:  Terra Nova  Fox  Steven Spielberg  Sky 1
Follow us on Twitter @The_Shiznit for more fun features, film reviews and occasional commentary on what the best type of crisps are.
We are using Patreon to cover our hosting fees. So please consider chucking a few digital pennies our way by clicking on this link. Thanks!