Vera Brittain's Testament Of Youth is considered to be one of the most important war memoirs ever published, a tragic real-life tale of love, loss and the atrocities of war. Its depiction of the impact of World War I on the women left behind as their men joined the army, not to mention the middle classes in general, is taught in schools both as a vital historical document and as a valuable piece of feminist literature. So bear with me while I try to criticise this film without sounding like a cynical, sexist Nazi.


It's not that the film isn't very good; it's perfectly serviceable as a war-torn drama, with occasionally powerful moments that really hit home the devastation that ensued at that time, as well as the lasting effects both on the men who saw it first-hand and society as a whole. And the film features a hugely impressive central performance by Alicia Vikander, who evolves from spoiled daughter to strong, independent scholar through to heartbroken victim of circumstance, all with compassion and conviction.

Let me explain (and, again, run the risk of coming off all the worse for it). While the film itself is well-crafted and it contains decent performances, from a film-viewing perspective, the story is deeply flawed. And I realise that to disparage the story is to disparage Vera Brittain herself, the poor woman who experienced this entire chain of events for real. She's not even alive any more so that means that I'm speaking ill of the dead too. Jesus, I'm just the worst. 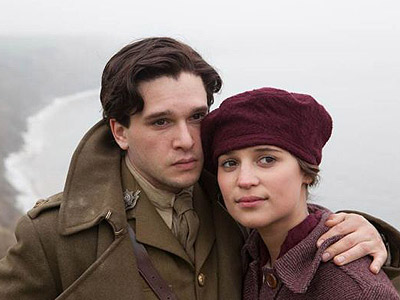 I can already feel them judging me.


Here's the first problem: This film just isn't particularly compelling. We start with a quartet of frolicking friends by the river and from the outset, it is clear that doom awaits everyone. Eventually, both Brittain's brother and her newfound love (a considerably wet Kit Harington who, I'm sorry, just looks strangely pudgy-faced without his Jon Snow beard) sign up to fight in World War I and then it's only a matter of time before something bad happens (spoiler: bad things happen in war).

Just as Vera herself waits to hear developments from the handily worded headlines of the front pages of The Exposition Times, we wait along with her. And wait. And wait. We never see any actual scenes of war - and that's fine, this is being told from her perspective, after all - but the film is instantly less interesting as a result. Instead we get the misery of separation, the frantic worry of uncertainty and more and more grief that gets piled on without respite.

At the same time, there's a sense that we're not really being offered anything new here, both as a story and with scenes that are so overdone they might as well be parody (I'm looking at you, 'tearful crowded farewell through the window as the steam train pulls away from the platform', yes you). This is where things get tricky, because obviously the tragic events that occur in the film as well as these clichéd scenes are irrefutable. They all actually happened. So who am I to condemn the film for their inclusion? I'm just a humble blogger, even if I do have over 900 Twitter followers to my name (way more than Vera ever had). 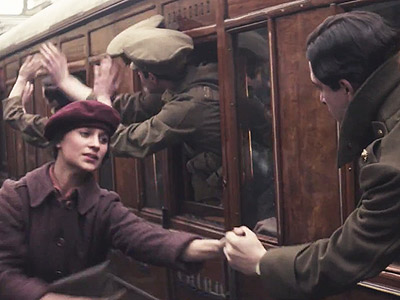 She is definitely not standing behind the yellow line here. That's just reckless.


Here’s where things get worse for me. If you think I’ve been reasonable so far, this is where I really start to sound like a terrible person… because I didn’t really like Vera herself. She’s too perfect. She is an intellectual who battles her way into Oxford despite being 'just a girl', she gives up on her dreams of being a writer in order to become a nurse just so that she can help in the war effort, she helps fiancé Kit Harington through his traumatic time on the frontline by encouraging him to work on his poetry. At every turn, she is kind, strong, independent, selfless and considerate. By the end of the film she seems to be the only one arguing in favour of peace, like she and she alone understands the futility of war.

Isn’t that all a bit neat? If this were a fictional account, I would argue that the lead character was one-dimensional. Let me put it another way: at school I was always taught that when regarding a historical document, I should always consider the source for bias. I’m not saying that Vera Brittain’s account of her own life is in any way false. Of course not. I’m just saying when I get round to writing MY memoir, I’ll probably go big on the selfless acts and impassioned speeches too. I might even throw in that time when I rescued a bunch of kids from a burning orphanage. 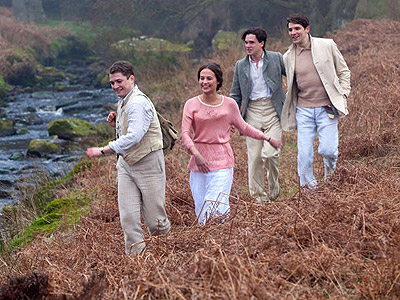 This is a picture of me and my friends, shortly before I invented the picnic.


So am I expected to give this film a free pass just because of how well-respected Vera Brittain’s work is? Should I forgive sentimental cliché just because it is based on a true story? Should I pretend to have appreciated the two hours of misery just because it actually happened? Am I a horrible human being?

The answer is probably 'yes' to all of the above. In which case, I might as well go for broke and admit… I didn’t even like Kit Harington’s poetry in this film. Every rhyme and flowery adjective seemed simple and cloying. And every time there was a suggestion of him writing a new verse from the battlefield, all I could think about was…

I apologise to every one of our readers who fought in a World War just so that I could spend evenings Googling Blackadder in my pants. If it helps, I quite liked Fury.

More:  Testament Of Youth  James Kent  Alicia Vikander  Kit Harington  Taron Egerton  Colin Morgan
Follow us on Twitter @The_Shiznit for more fun features, film reviews and occasional commentary on what the best type of crisps are.
We are using Patreon to cover our hosting fees. So please consider chucking a few digital pennies our way by clicking on this link. Thanks!