The January to March release window is a graveyard for movies: you can guarantee that any high-profile movie scheduled for a Q1 release will either be a film that has low expectations (usually because it's crap) or a film that'll sail right over the heads of the summer blockbuster crowd. I'm happy to report that The Adjustment Bureau falls firmly in the latter camp: it's an artful sci-fi thriller that doesn't feel the need to lob fistfights or car chases at you in order to entertain. Unfortunately, it's out on the same day as Liam Neeson's stolen-identity action romp Unknown, so you can expect it to get thoroughly trounced anyway. Schedulers, you've done it again!


This is a thick slice of Dick, Philip K style, which basically means it's a head-scratching - if disconcertingly slight - sci-fi concept, padded out to feature-length. The chin-stroker here is the matter of fate, and what to do when you realise your life path is not in your hands at all, but orchestrated by a shadowy cabal of agents with godlike powers and rather impressive organisational skills - and the style advisor from Mad Men.

Matt Damon plays David Norris; a charming, straight-shootin' US senator who commands an audience, first by talking in buzzwords and clipped sentences, then later by becoming a down-home man of the people who cuts the shit and talks from the heart. (Cunningly, in a bid not to upset audiences, he's a politician who never actually talks about politics; Norris is congratulated for his "great speeches" but not once mentions policies. Well, except for solar power, but I think we're all united behind that one. You definitely would be if Matt Damon tried to sell it to you. I digress). 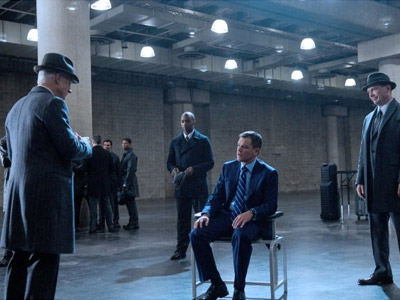 
After a flirtatious meet-cute with Emily Blunt's elegant dancer in a loo after an election defeat, Damon falls big-square-head over heels in love and does everything in his power to track down his soulmate. The only problem is, he and Blunt are not supposed to be together, or so say the be-hatted figures of The Adjustment Bureau, who give Damon a peek behind their curtain when one of their number fails to perform a task intended to keep the two lovers apart. The gloves are on: it's love versus fate in a fight to the finish. Our money's on Jason Bourne.

The Bourne comparison is obvious (like most of my jokes), but not entirely accurate - The Adjustment Bureau has little time for throwing Matt Damon through plate glass windows or having him choke Bureau agents with various items of office stationary. This is slow-burn stuff, with a first half almost completely shy of science-fiction. Damon and Blunt are given breathing room in their scenes together and director George Nolfi invests enough time in their relationship so that you believe they'd be all or nothing when it comes to the existential crunch. Chemistry? These two could be lab partners.

It's crucial that you buy Damon and Blunt as a couple, because their relationship anchors The Adjustment Bureau just enough for you to enjoy the movie's questionable sci-fi elements. The temptation would have been to keep the Bureau's nature ambiguous, but Nolfi does give us a look into the inner workings of the organisation. We see different levels of agents (The Hurt Locker's Anthony Mackie is part of the street team, Mad Men's John Slattery is a sort of supervisor, Terence Stamp is basically Alec Baldwin from Glengarry Glen Ross), there's talk of tasks being "above my pay-grade" and even staff nodding off at work. The Bureau often seem pretty crap at their jobs. 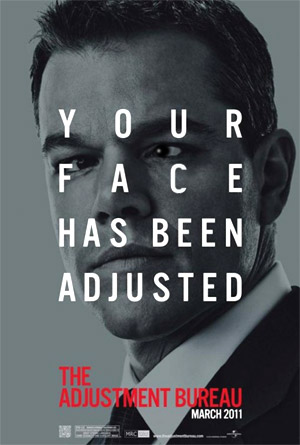 Of course, these scenes of the Bureau offset more fantastical moments, like when Mackie moves a bus with the power of his mind, or when you realise how the agents are able to hop around the city so quickly. There's an uneasy alliance between showing the more mundane elements of the Bureau as well as their more unbelievable capabilities. If agents have the power of telekinesis and can basically teleport through doors, why do they insist on communicating via mobile phone - and why even bother chasing targets on foot?

I enjoyed learning about the structure and the intricacies of the Bureau from the members themselves, but you may find yourself frustrated by inconsistencies of logic and the big questions that they raise. I call it 'Predator Dog Syndrome' - an idea that sounds cool in principle but doesn't bear up to close scrutiny. If the Predators in Predators have dogs, that means there is Predator dog shit, therefore somewhere in the universe you've created, there exists Predator Pooper Scoopers. You get what I'm saying? Sometimes it can better to just scoop the shit under the carpet and keep your mouth shut. The jury's out in this case.

The scenes when The Adjustment Bureau scales back the supernatural - such as the effortless banter between Blunt and Damon over the size of his mobile phone - are the movie's most enjoyable moments. The movie's high-tempo last act actually takes some of the wind out of its sails, ending with a trailer-friendly action scene that's little more than Matt Damon doing a Forrest Gump impression, albeit using one of the most laughable sci-fi plot devices ever devised (let's just say if I ever start my band, we'll be called Matt Damon's Magic Hat). 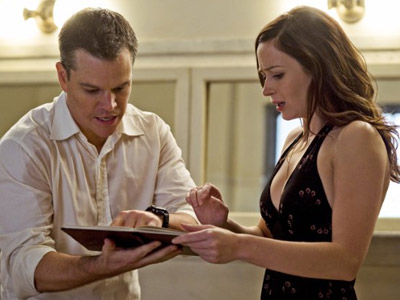 "Seriously, it says it right here. 'Matt puts on his magic hat'."


The Adjustment Bureau does sadly descend into science-fiction nonsense after a bold start, but it's always enjoyable and you never lose sight of what's at stake thanks to excellent character work from Damon and Blunt. Nolfi's screenplay resists waffling about 'free will' and 'choice' like sci-fi stablemate The Matrix did, keeping things slick and propulsive at all times without overwhelming the viewer with pseudo-philosophy.

It falters on the rare occasion it gives too much away, but for the most part, The Adjustment Bureau is a well-paced, well-balanced sci-fi with a believable relationship at its core. Also, Matt Damon would totally beat Liam Neeson in a fight. So there.

More:  The Adjustment Bureau  Matt Damon  Emily Blunt
Follow us on Twitter @The_Shiznit for more fun features, film reviews and occasional commentary on what the best type of crisps are.
We are using Patreon to cover our hosting fees. So please consider chucking a few digital pennies our way by clicking on this link. Thanks!