If documentary film was once considered the presentation of truth, the best examples of its contemporary boom seem now more concerned with examining the nature of truth itself. As if the genre had begun to no longer trust its own motives, we now see deliberate use of unreliable narrators, and are invited to consider the anatomy of a lie. Lance Armstrong is as unreliable a subject as you're likely to find, and by the end of Alex Gibney's latest film, you're still not sure whether he's telling the whole truth.


Ever since his dramatic confession to Oprah Winfrey a year ago, it was my view that everyone should pipe down about Lance Armstrong. He is a cheat, of course (though he disputes this on semantic grounds), and seems to me to exhibit signs of sociopathy, but he did, after all, only dope himself up to win a game in which men try to ride a bike faster than other men. And all games are pretty daft and inconsequential in the scheme of things. Cycling suffered because of it, but the world is bigger than cycling, and the millions he's raised for cancer research equalled a pretty simple equation for me: he'd done more good in the world than bad. 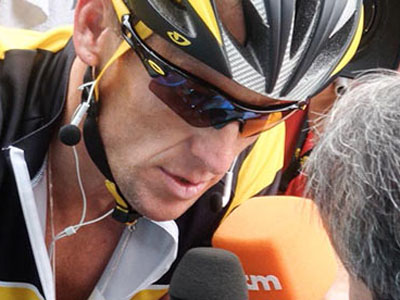 Channing Tatum, who was used as stand-in for the cycling scenes.


But through looking closer at the broader effects of this deception shown in The Armstrong Lie, I'm a lot less sure. By which I mean I'm now basing my opinion on at least a shoestring grasp of the facts, rather than my usual perpetually jerking knee. Because the fact is that in harming the reputation of a sport, you harm its capacity to make money through sponsorship, which impacts people's jobs; people's lives. And he and others are also facing a civil fraud case by the US Postal Service, which invested taxpayers' money to sponsor his team to the tune of $40 million.

What's most interesting about Alex Gibney's documentary is the fact that he initially set out to make an entirely different one: The Road Back, about Armstrong's attempt to come out of retirement and win an eighth Tour de France. You wonder why he wanted to; a straightahead inspirational sports documentary seems out of keeping with his usual modus operandi. But once the doping scandal broke, he had no choice but to shelve it then pick it up again later, retooled as a quest to make his subject explain himself for lying to him throughout their time together.

It's not so much Armstrong's denial of doping, which you see time and time again in archive footage, that gets you. If you're cheating, you have to pretend you aren't; there's not much point doing it otherwise. No, it's the indignation, sometimes vitriol, with which he denied it that gives you a real insight into his character. Because what's clear is that either he had convinced himself he was doing nothing wrong (and in fairness there's plenty of evidence that most of his competitors were doing the same), or he simply didn't believe anybody had the right to question him. It was probably a bit of both. There is even a denial in which he invokes his responsibility to the cancer-stricken children to whom he is a role model. I physically winced. Gibney explored a similar, though far less extreme, bullishness in the face of accusation in Client 9: The Rise And Fall Of Eliot Spitzer, and he knows how to let the archive footage do the work for him in the light of what the viewer already knows. 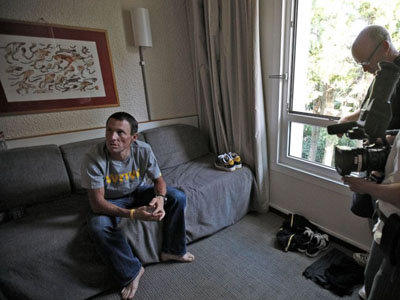 
You see here a very charismatic and engaging figure, and that's quite deliberate. Just as in 2012's The Imposter, you begin to understand why everyone wanted to believe Armstrong: he's shot very close up, letting you see the powerful effect of his gimlet stare when he's trying to convince. The central question of Life Of Pi is raised again: why would you choose to believe the ugly truth when the lie is so beautiful? You also begin to comprehend the depths of his manipulation, and his desire not just to defeat, but to crush anyone who challenges him.

By the end, when Armstrong discusses his return from retirement to ride the 2009 Tour de France (he finished third, and through twisted logic considered it a victory), he swears up and down that he raced this one clean. Yes, he was doped in the others, he admits, but so was everyone else, and this time he wanted to prove to himself he could do it unaided by erythropoietin. But you don't know whether he's still lying, because he seems not to possess any actual concept of truth, and there is no final answer. Gibney doesn't provide one, because he doesn't in fact know it himself. All he can do is present the differing versions of events and let you decide.

More:  Alex Gibney  Lance Armstrong  Documentary
Follow us on Twitter @The_Shiznit for more fun features, film reviews and occasional commentary on what the best type of crisps are.
We are using Patreon to cover our hosting fees. So please consider chucking a few digital pennies our way by clicking on this link. Thanks!