It's very hard to go into a film with no preconceptions. Unless you give Ali's 'no advance knowledge of Man of Steel' project a go yourself, there are too many posters, trailers and blogs around not to have some prejudice when you walk in. I certainly did. I thought I'd hate The Best Exotic Marigold Hotel; that it'd be full of lovely old middle-class people being lovely, old and middle-class, who then go through life-changing crises I wouldn't care about because they're lovely, old and … you get the picture. It is, of course, full of exactly this. But it's also crammed with some of the best British actors you could want to see on screen, and that's just about enough to carry it. Which is annoying really, because I had to scrap most of the put-downs I'd written on the way there.


I read an interview with Dustin Hoffman recently in which he wondered: "How many leads are written for someone who is 74 years old? Three-dimensional, interesting, leading characters – they don't write those roles for people in my age bracket." Now, if Dustin Hoffman can't get a gig, Celia Imrie must be fucked, right? Well, yes and no. See, in Britain we treat the elderly a little differently on film. Since The King's Speech, the over-60s go to the cinema a fair bit too these days – and they love stuff about the travails of being over 60.

The Best Exotic Marigold Hotel is squarely aimed at them. (Which made all the more confusing the confiscation of everyone's phone before the screening I attended: I'm pretty sure they don't teach you about BitTorrent at the local library's Silver Surfer classes.) The opening scene makes this clear, as Judi Dench frustratedly calls her ISP to ask: "Is Wi-Fi the same as wireless? And what does it have to do with broadband?" From here there's a quick intro to each character and their reasons – some better illustrated than others – for deciding to retire to the titular hotel in India. Recently-widowed Dench is short on cash, as are married couple Bill Nighy and Penelope Wilton; Celia Imrie and Ronald Pickup just want to get laid, and Maggie Smith needs a hip operation and can't wait six months on the NHS.

There are problems with character even at this stage. Wilton refuses to try anything new, so you wonder why she agreed to go in the first place, and Smith is a racist. Not a "No no, I called him 'negrito' and we all say that in Uruguay" sort of racist, but a really nasty, unpleasant one. And she's off to India, where there are, by all accounts, a fair few Indians. By the end, of course, she's dispensing equable, homespun wisdom to which everyone's somehow happy to listen. 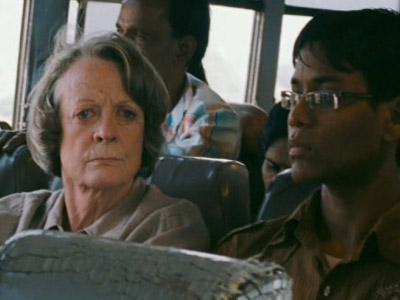 John Madden, taking a break from his successful range of NFL games for the SEGA Megadrive, deals very well with the multiple character arcs, with Imrie and Pickup popping up for comic relief every now and then to support the main dramatic threads.

The best of these is Tom Wilkinson's, whose reason for being in India was the worst explained at the start, but when revealed provides a much-needed MacGuffin to drive the whole thing along. It's in his scenes, and the ones where anyone else is arguing or on the verge of tears, that you can't fail to appreciate the acting talent on display. These guys, you remember, have quite simply got this shit locked. Just Dench and Smith alone are packing three Oscars in their collective surgical stockings.

But the problems with it nag at you. Being Indian, the hotel's owner Dev Patel must of course have a mother who disapproves of his girlfriend and wants to arrange a marriage for him, because that happens to ALL INDIANS. A shame, because he's an actor capable of much more than he's given to do. His girlfriend's brother, who runs a call-centre, is positively charming to Dench when she shows up on a whim wanting to tell him how they should talk to old people on the phone, but as soon as Dev turns up he's suddenly a douche. It's a lazy inconsistency: you could have just had two different characters and it would've worked fine. Wilkinson's arc is rounded off far too suddenly, then explained away as an afterthought. 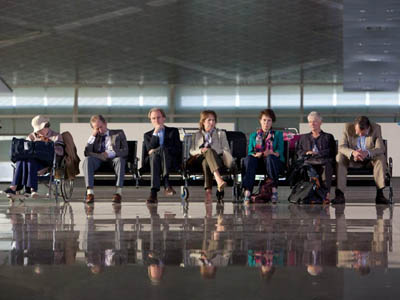 The Usual Suspects 2: Who is Keyser Söze? "Oooh, he sounds like a bloody foreigner to me", etc etc.

It's not meant for me, of course: I'm young enough to know the difference between 'Save' and 'Save As'. Still, in terms of its target audience, it hits every mark it's supposed to, it has a few laugh-out-loud lines, and its cast could out-act most of their younger contemporaries without even bothering to get out of their walk-in bathtubs. I suspect it will do pretty well in America, too, appealing as quirky British whimsy with a decent emotional punch in the same way Calendar Girls did.

But for me it's not much more than simply enjoyable overall – you know, like a nice cup of tea and an afternoon's complaining about post office queues in front of Countdown. Come on, everyone likes that, right guys? Guys?

More:  The Best Exotic Marigold Hotel  Judi Dench  Bill Nighy  Tom Wilkinson  Maggie Smith  Dev Patel
Follow us on Twitter @The_Shiznit for more fun features, film reviews and occasional commentary on what the best type of crisps are.
We are using Patreon to cover our hosting fees. So please consider chucking a few digital pennies our way by clicking on this link. Thanks!