The Cabin In The Woods

I'm about to write a thousand words on why The Cabin In The Woods is the best movie of the year so far, yet I can't actually tell you anything substantial about it without ruining it. In true Psycho style, to share the film's secret is to rob it of its power. Just take it from me that you're better off knowing as little as possible about The Cabin In The Woods, and even if you think you know what it is, you probably don't. What you see in the trailers is approximately 25% of the film – the tip of the iceberg. The brilliance of The Cabin In The Woods is in exactly what's lurking beneath the surface.


Suffice to say, there's not much I can say beyond what's already been revealed – a group of sexy college kids take a vacation to a distant cousin's cabin in the woods, with the express desire of getting this party, as they say, a-started. Beers are chugged. Sexual shenanigans are had. Blood is shed. All of the horror archetypes are present and correct… but that's exactly what Drew Goddard and Joss Whedon want you to think. It's so much more than a run-of-the-mill slasher and you'd be wise not to underestimate it. 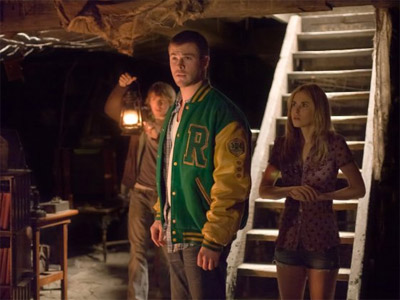 This picture is brilliant in so many ways I can't tell you about.


This Cabin isn't built on the shaky foundations of a twist. It sets out its stall from the go – a witty and unexpected opening that'll confound your expectations straight out of the gate. From then on in, the horror tropes arrive in droves, but the film is very much aware of them and pokes fun at them in a fresh, unique way. Watching The Cabin In The Woods is like watching a horror movie with the best director's commentary ever playing over the top – it's knowing and tongue-in-cheek and brilliant at deflating your expectations, but crucially, it remains a scary film, even when essentially parodying itself.

Essentially, it's a movie within a movie, later revealed to be not even the movie you thought you were watching. There's very little nudging and winking – Whedon and Goddard aren't interested in getting meta. Cabin's humour comes from its great desire to screw with conventions, and the inherent fun there is to be had once it's been established that the movie knows its own rules. It's as if certain characters are watching the film alongside you. We're all on the same side.

The movie's screenplay – available online if you know where to look and are completely ignoring my opening paragraph – second-guesses you every time you think you have a handle on it. The timing of the surprise reveals is almost supernaturally precise – I can remember two occasions while watching it when I thought to myself 'This is cool, but it's a shame they didn't…' and then the film would totally blow my mind. I may well have been inceptioned. Cabin gets progressively more intense and more ingenious the deeper you delve - the last act is a stone-cold, freeze-frame, pause-and-rewind classic, featuring scenes destined to be discussed for years. It's one of those rare movies that just gets better until it's over. 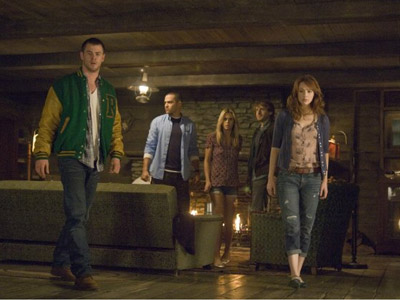 Okay, this scene isn't the best, but it is one of the only pics sans spoilers.


Sorry to be a tease. It's the most awful thing not being able to pore over scenes from The Cabin In The Woods with others - it's a film that instantly invites debate as soon as it's over; one that practically demands you feverishly recall every single minute detail with friends, in that way that only Joss Whedon projects demand. His fingerprints are certainly all over it - from the biting script to the resident smartass and savvy voice of the audience. Take a bow Fran Kranz, you're officially the new Xander.

It's beyond comprehension why it took three years for the studios to pull their finger out and grant this film the release it so sorely deserves - the idea of this sitting on the shelf gathering dust while Paranormal 4ctivity hoovers up audience coffers is too much to bear. The Cabin In The Woods is a total game-changer and deserves to revitalise the horror comedy in the same way that Scream did the slasher movie – it's going to be impossible for anyone to make a horror movie even half as clever, exciting or unpredictable as this for decades.

The funniest horror movie since The Evil Dead.

More:  The Cabin In The Woods  Drew Goddard  Joss Whedon  Chris Hemsworth  Richard Jenkins  Bradley Whitford
Follow us on Twitter @The_Shiznit for more fun features, film reviews and occasional commentary on what the best type of crisps are.
We are using Patreon to cover our hosting fees. So please consider chucking a few digital pennies our way by clicking on this link. Thanks!