The tech-firm thriller seems to have supplanted the gangster movie as the modern-day American Dream story. Exploit free markets with entrepreneurial spirit, cut a few corners, hubris, rise and fall, regret, redemption. By now I thought we were past the point of techno-cautionary tales which ask whether the internet is a good or a bad thing, largely because the @dog_rates Twitter account has proved beyond all doubt that it is the former, and yet here we are.


Odd thing about The Circle, though, is that it is almost entirely devoid of characterisation. It's as if it knows you've seen this film before – and you have if you've seen any thriller in which a young idealist joins a company that seems wonderful but turns out to be sinister – and so is content enough that you are familiar with the character archetypes that it doesn't have to do any of the heavy lifting itself.

This sort of narrative outsourcing might not matter too much if it didn't have so little to say, and weren't so convinced it had so much to. Privacy, you see: a sticky wicket, or so this lot are keen to tell us through Emma Watson. She's got a new job at tech behemoth The Circle, which boasts a massive campus full of massage parlours, juice bars, volleyball nets and everything else you'd come to see as crushingly mundane once you'd worked there for a month. At first an outsider, soon she's in the belly of the beast owing to a handy narrative shortcut and the tech industry's disregard for corporate hierarchies, throwing aside any concerns about user privacy and ignoring old friend Ellar Coltrane's down-home advice. 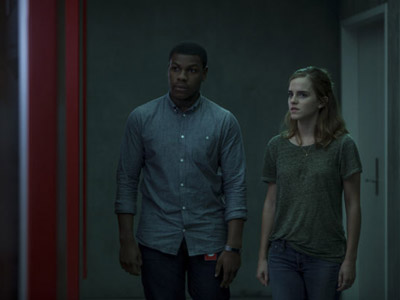 "It's down there, just past the big server labelled "MASSIVELY INVASIVE PERSONAL USER INFORMATION."


What CEOs Tom Hanks and Patton Oswalt are running is the kind of shop we all suspect Facebook to be, but without the tiresome shackles of pretending otherwise. The Circle has expanded from what you presume is a social network to offer all manner of useful things like imperceptible HD webcams so everyone can see what everyone's up to all the time. It mirrors how Google releases its little private invasions incrementally, so you don't think much of it at the time until you realise years later how much access you've allowed it to gain.

Mass voluntary self-surveillance has been the tech roadmap for a while, so it's not like this is anything new. But Hanks in particular seems to have an ideological stance on it not far from Panopticism. "Do you think you behave better when you're being watched?" he asks Watson, and we're in different country from the simple tech capitalist logic of data=money. The Circle is trying to achieve some sort of mass social control. "Secrets are lies."

You might find this interesting, if you believed that Tom Hanks was the CEO of a tech company. Great as he is, because he doesn't know how not to be, I don't believe for a second that Tom Hanks is the CEO of a tech company. I'm always quite tickled that he runs his own Twitter. Sure, he's got the approachable no-suit Silicon Valley vibe going here, but they'd have done well to note that global titan tech CEOs don't use the phrase "log on" to mean "visit a website".

John Boyega spends much of it literally standing around looking at his phone, probably WhatsApping Harrison Ford or on SkyScanner looking at flights back to Peckham, and Coltrane, a woodworker who doesn't care for social media, is largely there as a cipher for the idea of personal connection. "Why didn't you call or text?" Watson asks him, not unreasonably, when he shows up unannounced at her work. "Because I wanted to look you in the eyes!" he says, and we're supposed to be on his side in the exchange. There is a lot of this: it's not so much that the dialogue is bad, more that it is just a blunt tool in a whole shedful of even blunter ones. 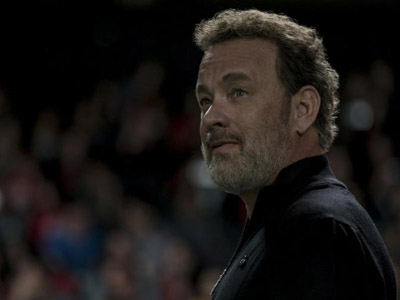 "No, it's not a black polo-neck; it's a zip-up. Why does everyone keep asking me that?"


Everything is presented at its simplest: Watson's friend Karen Gillan, who gets her the gig, gives her the campus tour by pointing at things and barking their labels ("Gym! Barbecue! Ideas pod!") while barely looking up from her phone, and begins every scene by breathlessly announcing which country she's just flown in from. Later she experiences burnout, which we know because she hasn't brushed her hair. An early scene in which the team who runs the internal social network passive-aggressively chides Watson for not posting enough so her colleagues can learn about her plays out like an SNL sketch, but is meant earnestly.

By the end, via a character power shift which sort of makes sense, and a mass change of collective personality which definitely doesn't, you're left with the sense that you just watched The Firm, only with " internet" all over the script. And moreover that there are ideas here which might've been interesting if The Circle hadn't taken the path of least resistance towards exploring them.

More:  The Circle  James Ponsoldt  Emma Watson  Tom Hanks  Ellar Coltrane  Glenne Headly  Bill Paxton  Karen Gillan  John Boyega  Patton Oswalt  Netflix
Follow us on Twitter @The_Shiznit for more fun features, film reviews and occasional commentary on what the best type of crisps are.
We are using Patreon to cover our hosting fees. So please consider chucking a few digital pennies our way by clicking on this link. Thanks!