The Conjuring 2: The Enfield Case

There is a superb moment of unintentional hilarity in Conjuring 2. Vera Farmiga's spirit medium wakes up in the morning to discover husband Patrick Wilson painting at an easel. "Did you suddenly feel inspired?" she asks tenderly. "I wouldn't call it inspiration exactly. It's just an image I haven't been able to get out of my head all morning" he nonchalantly replies, before turning the easel around to reveal a perfect close-up portrait of an evil demon nun with glowy eyes and fangs.


When Farmiga looks stunned (recognising the demon from an earlier vision), Wilson tries to lighten the mood: "Now, I know I'm no Picasso, but I thought it was pretty good!" He says, apparently completely oblivious to the fact that he has painted what is obviously a horrifying hellspawn likely to bring death and eternal torment to some poor soul. This from a guy who makes a living as an expert in paranormal investigation.

In a genre that produces a hundred hackneyed efforts for every one decent movie, this moment in Conjuring 2 is a reminder of how laughable horror films become when they rely on contrivances and cliché, which they so often do. In a film that has to carefully tread the line between real-life plausibility and supernatural fantasy, this is a moment where the veil separating the living from the dead suddenly looks like it might just be a guy in a bedsheet with eye-holes cut into it.

Luckily, it’s only a moment – the rest of the film amounts to one of the most effective horrors released in years; a truly gripping ghost story that keeps you guessing from start to credits. And it does this mostly by playing with the same tropes and traditions that usually exhaust all originality from the genre – sometimes jump scares are immediate, sometimes you’d predict them to happen four or five times before they actually do. And when the frights DO come, they aren’t cheap. Horrifying imagery, creeping tension and unsettling disturbances are all put into full effect, even if there is also the odd appearance from a garish CGI stick man. 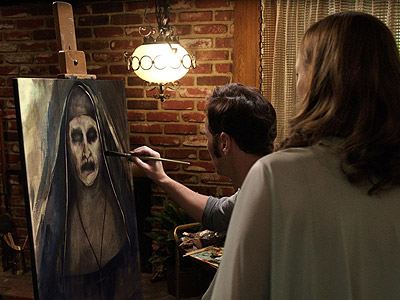 Frankly, this is still more frightening.


In this retelling of the real-life Enfield Poltergeist case (already retold recently in the effective event series The Enfield Haunting), director James Wan isn’t exactly reinventing the Catherine wheel. There’s a ghost tormenting a family in 70s London, possessing a teenage girl, driving them out of what he claims to be his house, with the resulting spooky shenanigans requiring the expertise of ghost busters Patrick Wilson and Vera Farmiga (him, I can get on board with, but her? She’s ruining my childhood, etc).

Anyway, there is nothing on paper that makes this horror sequel stand out from a thousand generic movies that tell a similar story. But, in practice, Wan delivers what feels like a fresh take on an old formula. It’s like he has found a new way to burrow into your brain and claimed his own area – the hippo-WAN-pus – to pull your puppet strings with red herrings and unpredictable startles.

Of course, it also helps that you have a talented cast playing out roles and relationships to really care about. It sounds obvious, but having Wilson and Farmiga bring real affection for each other as the husband-and-wife team, risking themselves to help others in the face of demonic deeds, makes for much more investment in the story than if they were, say, vacuous models in their underwear. And caring about these two characters – and the family to a certain extent (but if you had to choose, you’d throw those young kids straight into a hell-mouth to save Wilson and Farmiga) – brings a whole other level of tension. With their lives and their entire relationship at threat, the air of foreboding is palpable throughout the whole film. Something that Wan clearly enjoys teasing us with.

As always, of course, there are issues to contend with. While 70s working class London is depicted with a surprising level of authenticity, the cut that takes us there, complete with London landmark montage set to the tune of London’s Calling, is one of the most frightful sights of the whole film. If your establishing shot has been done a hundred times before, and famously by an episode of Friends, the argument for your originality gets damaged somewhat.

Plus the film does expect to have the best of both worlds with its London setting, showing us a penniless, salt-of-the-earth single mum and her kids, who happen to have a massive flooded basement the size of which just isn’t seen outside of suburban Springfield.


But none of these – and not even Wilson’s artistic endeavours into the world of water colours and satanic life models – takes attention away from how effective this film works in providing genuine heart-in-mouth tension and delivering a nerve-wracking climactic showdown.

It says a lot that in the film’s final 20 minutes, I happened to notice that everyone in the entire three rows in front of me were all leaning forward, literally on the edge of their seats, glued to the screen. And then I realised I was doing exactly the same thing. Now, I know I'm no Picasso, but I thought that was pretty good.

More:  The Conjuring 2 The Enfield Case  The Conjuring  James Wan  Vera Farmiga  Patrick Wilson
Follow us on Twitter @The_Shiznit for more fun features, film reviews and occasional commentary on what the best type of crisps are.
We are using Patreon to cover our hosting fees. So please consider chucking a few digital pennies our way by clicking on this link. Thanks!