The Croods raises some interesting questions. Such as: where can I find me some giant corncobs? What's up with that flying tortoise/parrot thing? Is it weird to be attracted to an animalistic red-headed cave girl who runs on all fours? And why can’t I stop staring at that dude's distractingly convincing CGI nipples? At least, these were my thoughts upon leaving the screening of this film. I hope for their sake that the children in attendance weren’t thinking the same as me.


Aside from the off-putting nipples, The Croods tells the story of a prehistoric family who are forced to up sticks and hunt for a new home, when their safe, warm cave is destroyed by the end of the world - or 'continental drift', as is actually the case. This is much to the concern of fear-mongering, be-scared-of-anything-new father Grug (Nicolas Cage), and much to the excitement of adventurous, ever-curious teenage daughter Eep (Emma Stone).

Set during a time when the prehistoric world took a very Avatar-ish look, The Croods is basically the story of the world's first family road trip. You've got your patriarch worrisome father responsible for everyone's safety, the eldest, rule-breaking daughter, the questionably semi-retarded son (Clark Duke), the mother who simply goes along with it (Catherine Keener), the baby and the sassy grandma (Cloris Leachman). It's basically National Lampoon's Prehistoric Vacation. 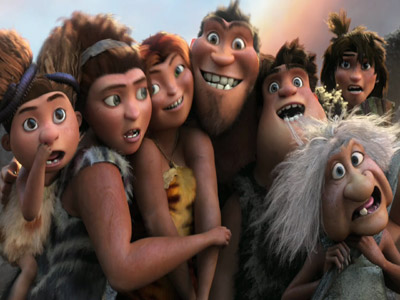 All this is missing is a coked-up Chevy Chase.


But while the workaday, one-idea story can't compete with anything Pixar have in their cupboard, The Croods picks up points for some staggeringly beautiful, meticulously detailed animation. It somehow manages to look fittingly primitive and cartoony, even though every fleck of dust, splat of mud and lock of grizzled hair has obviously been lovingly and painstakingly rendered.

Writers and directors Chris Sanders and Kirk De Micco meanwhile (the former wrote the wonderful How To Train Your Dragon, the latter wrote the not-so-wonderful Space Chimps) manage to squeeze a lot of life and stone age-based LOLs out of their simple story, as well as some instantly lovable and memorable characters. For example, Ryan Reynolds' character, Guy (you remember him, I mentioned his nipples earlier) is seemingly credited with inventing fire, fireworks, trousers, belts, pets, stilts, umbrellas, telephones, jokes and shoes – more than enough ammo for some wacky sight gags. The family's befuddlement when confronted with fire raises a good chuckle, and Eep's hilarious overreaction when presented with her very first pair of shoes will no doubt resonate with the majority of young girls in the audience. 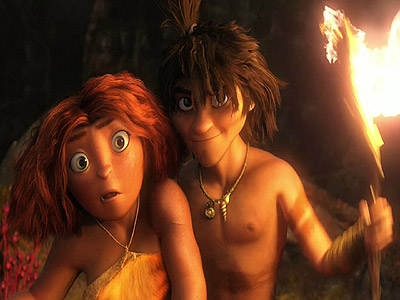 And there's a relatable character for groping, pervy teenage boys, too.


So while The Croods might stick to the main roads and is as predictable as the sun coming up, an impressive cast, a constant barrage of family-friendly jokes, well-meaning messages and slapstick violence make this particular road trip one you’ll be sad to see come to an end. Although don't be surprised if a sequel - if not a whole new franchise - comes out of it somewhere down the line.

More:  The Croods  Dreamworks  Nicolas Cage  Emma Stone  Catherine Keener  How To Train Your Dragon  Space Chimps
Follow us on Twitter @The_Shiznit for more fun features, film reviews and occasional commentary on what the best type of crisps are.
We are using Patreon to cover our hosting fees. So please consider chucking a few digital pennies our way by clicking on this link. Thanks!